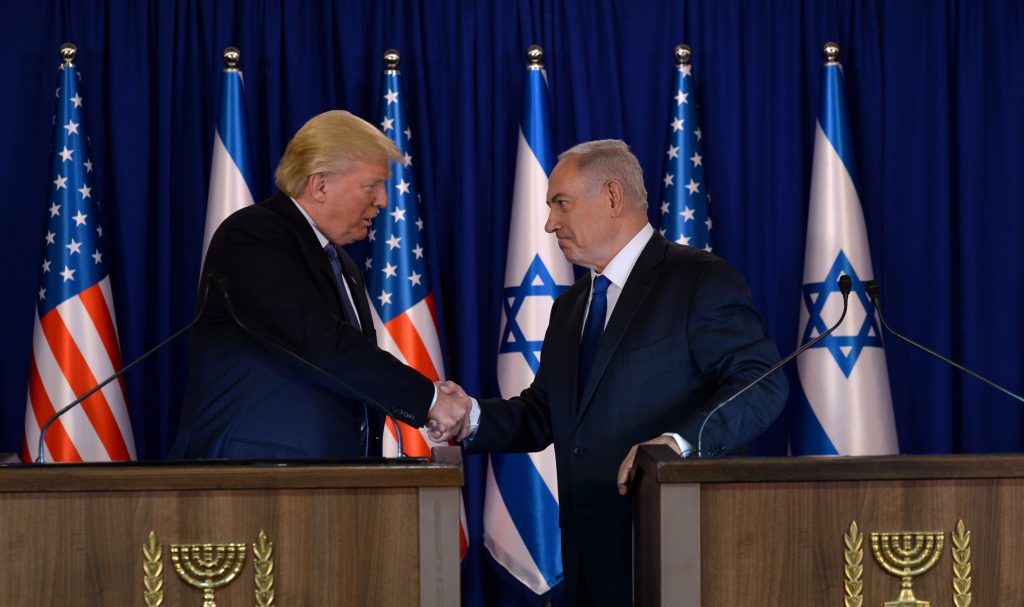 Following their meeting at the King David Hotel in Yerushalayim Monday, U.S. President Donald Trump and Israeli Prime Minister Binyamin Netanyahu went to the Prime Minister’s residence, where they gave joint press statements, before having dinner. Following is the text of their remarks, as released by The White House:

We’ve known each other for many years, and it’s always good to see you. But it’s also wonderful to see the blossoming friendship between our two …. wives, Sara and Melania. You’re so welcome here, and we’re so pleased to see you. We’re honored to have you in our home.

You’ve been today, Mr. President, to the Western Wall, one of the holiest sites of Judaism. You have been to the Church of the Holy Sepulchre, one of the holiest sites of Christianity. We protect the Christian sites as no one else does anywhere in this region. We protect Christian sites, Muslim sites, obviously Jewish sites. We’re committed to the freedom of all faiths and to the rights of all.

Mr. President, I appreciate the fact that you went to the Western Wall and you’re the first acting President who’s done that. The people of Israel applaud you for it. (Applause.)

We had a terrific discussion today. And when I say terrific, it encompasses everything. We can talk about deregulation, we can talk about economics. I think we quote each other. We understand each other and so much of the things that we wish to accomplish for both our countries.

But I want to thank you especially today for your deep commitment to Israel’s security, its wellbeing, and its future. I have no doubt that, as we work together, you and I, the alliance between our countries will grow ever stronger. I want you to know how much we appreciate the change in American policy on Iran, which you enunciated so clearly just an hour ago.

I look forward to working closely with you to confront the dangers we face together in this violent and volatile Middle East. I believe that together we can roll back Iran’s march of aggression and terror in this region, and we can thwart Iran’s unbridled ambition to become a nuclear weapon state.

I also look forward to working closely with you to advance peace in our region, because you have noted so succinctly that common dangers are turning former enemies into partners. And that’s where we see something new and potentially something very promising. It won’t be simple. But for the first time in many years — and, Mr. President, for the first time in my lifetime — I see a real hope for change.

The Arab leaders who you met yesterday could help change the atmosphere, and they could help create the conditions for a realistic peace. These are all great signs on your historic visit. It’s a visit that I think has echoed down the ages, because the great Abraham Lincoln is reported to have said that there was no city on Earth he so much desired to see as Jerusalem.

You honored me and Melania by being one of the first world leaders to visit the White House, as you know. And we had a very good and sound discussion. And now you honor us again by welcoming us to your home on my first trip abroad as the President of the United States.

This is a land filled with beauty, wonder, and the spirit of God. I’ve been amazed by the glorious and beautiful monuments and holy sites, and the generosity of your incredible people. Because it’s all about the people. I was deeply moved by my visit today to the Western Wall. Words fail to capture the experience. It will leave an impression on me forever.

Today, we reaffirmed the unbreakable bond of friendship between Israel and the United States — a friendship built on our shared love of freedom, our shared belief in human dignity, and our shared hope for an Israel at lasting peace. We want Israel to have peace.

But we are more than friends. We are great allies. We have so many opportunities in front of us. But we must seize them together. We must take advantage of the situation, and there are many, many things that can happen now that would never have been able to happen before. And we understand that very well. That includes advancing prosperity, defeating the evils of terrorism, and facing the threat of an Iranian regime that is threatening the region and causing so much violence and suffering.

During my travels, I have seen many hopeful signs that lead me to believe that we can truly achieve a more peaceful future for this region and for people of all faiths and all beliefs and, frankly, all over the world.

In my visit to Saudi Arabia, I met with many leaders of the Arab and Muslim world, including King Salman, who treated us so beautifully and really wants to see great things happen for the world. He really does. I got to know him well, and he really does.

These leaders voiced concerns we all share — about ISIS, about Iran’s rising ambitions and rolling back its gains, and about the menace of extremism that has spread through too many parts of the Muslim world. I’m encouraged that they pledge cooperation to confront terrorism and the hateful ideology that drives it so hard. America welcomes the action and support of any nation willing to do the hard but vital work in eradicating the violent ideologies that have caused so much needless bloodshed and killing here and all over the world.

We are willing to work together. I believe that a new level of partnership is possible and will happen — one that will bring greater safety to this region, greater security to the United States, and greater prosperity to the world. This includes a renewed effort at peace between the Israelis and the Palestinians, and I thank the Prime Minister for his commitment to pursuing the peace process. He’s working very hard at it. It’s not easy. I’ve heard it’s one of the toughest deals of all, but I have a feeling that we’re going to get there eventually, I hope.

America stands ready to assist in every way we can. Our deep and lasting friendship will only grow deeper and stronger as we work together in the days ahead. I thank you again for hosting us in this beautiful and ancient land. Truly, it’s a land of wonders. And it’s my honor to be here with you.