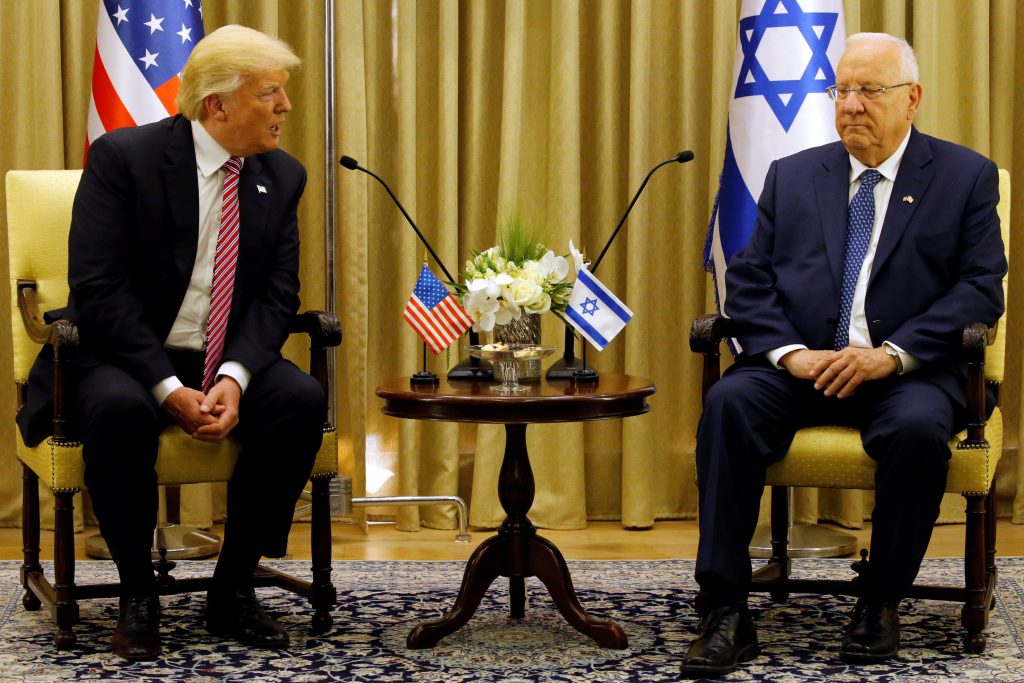 After leaving the warm reception at the airport by helicopter for Yerushalayim, President Donald Trump arrived at the home of President Reuven Rivlin.

President Trump said that Iran must immediately stop its financial and military support for “terrorists and militias” and he reiterated that it never be permitted to possess atomic arms.

“Most importantly, the United States and Israel can declare with one voice that Iran must never be allowed to possess a nuclear weapon – never, ever – and must cease its deadly funding, training and equipping of terrorists and militias, and it must cease immediately,” Trump said in public remarks at a meeting with President Reuven Rivlin.

In his speech at President Rivlin’s official residence, President Trump said he was deeply encouraged by his conversations with Muslim world leaders in Saudi Arabia.

“Many expressed their resolve to help end terrorism and the spread of radicalization. Many Muslim nations have already taken steps to begin following through on this commitment,” he said.

“There is a growing realization among your Arab neighbors that they have common cause with you in the threat posed by Iran,” President Trump told President Rivlin.

President Rivlin told President Trump that “we are praying for peace and we are pushing for peace for the last 100 years, and with G-d’s help somebody will bring us peace.”

In a short inscription in the guestbook at the residence of Rivlin, President Trump wrote: “It is such a great honor to be in Israel and be with all of my great friends!”

Later, tree was planted in President Trump’s honor in the presidential garden, as has been done for other visiting dignitaries, including former President Barack Obama.

President Rivlin told President Trump on the way out that “indeed we pray for peace in Yerushalayim.”