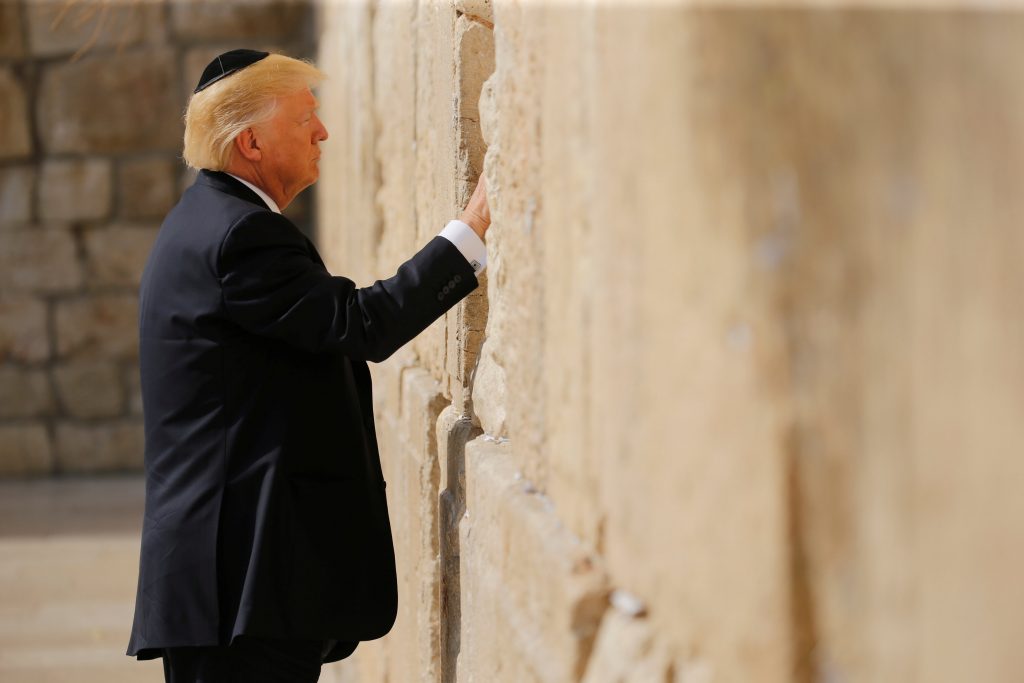 At 4:26 p.m. on Monday, President Donald Trump did what no other American president ever did before: he visited and prayed at the Kosel, Judaism’s holiest site.

Spokepersons for the American delegation had said that the president wished it to be a personal, private visit, with as little political overtones as possible, and so it was.

As he walked down the Kosel plaza, the president was accompanied by Rabbi Shmuel Rabinowitz and Western Wall Heritage Foundation director Mordechai Eliav, but there was no official or media entourage at his heels. The hundreds of officials, journalists and security forces who had just escorted the American delegation through the streets of the Old City of Yerushalayim, all kept a respectful distance while Donald Trump made history in his own personal way.

The president stopped and stood just short of the Kosel, then took the kippah out of his pocket, placed it on his head, and with great reverence, approached the stones and touched them. He appeared to then say prayer, after which he removed a folded note from his pocket and inserted it in a crevice in the Wall.

Mr. Trump’s son-in-law Jared Kushner also walked to the men’s section of the Kosel, while his wife Ivanka Trump and First Lady Melania Trump visited the women’s side, honoring the Jewish tradition which has been challenged by so often and so vociferously by Reform and Conservative groups in recent months.

Ivanka said a brief tefillah before stepping away from the Kosel. The First Lady stood respectfully and then touched the wall which has been the focus of so much history, so many tears and the hopes of the Jewish people and the world for peace.

Ivanka later tweeted, “It was deeply meaningful to visit the holiest site of my faith and to leave a note of prayer.”

Israeli Prime Minister Binyamin Netanyahu did not accompany President Trump, in keeping with his expressed wishes to make it a private, not a political, visit.

Later, when Trump and Netanyahu met again, it emerged that the president was not aware that he had made an unprecedented visit, according to a statement released by the Prime Minister’s Office:

Netanyahu said: “Mr. President, it’s a pleasure to see you again. I know you went to the Western Wall and you touched the stones of our existence, and you’re the first acting American president to do that, and I have to express our appreciation not only for that, but also for your friendship for the State of Israel, your understanding of our story, our struggle, our desire for peace – which is all of these things I’d like to talk to you about, including Iran, including Syria, including the Palestinians, including the wonderful cooperation between our two countries, and anything else that you could discuss.”

Trump replied: “Well, it’s just been an honor to be here. The Western Wall was just incredible, being there. I spent time and your folks have been so nice. As you know, I’ve been a big supporter of Israel for a long time. I’ve been a big supporter of yours for a long time. But it’s just a magnificent place, with magnificent people. Many, many friends come from Israel, my great friends come from Israel, and I’m very honored to be here.

The capital was on full security lockdown all during the visit.

Earlier in the day, police said a protest broke out near the Jaffa Gate entrance to the Old City. The protesters were Jews, but the precise nature of the protest was not immediately clear.

Police quickly dispersed the protest. No other incidents were reported.