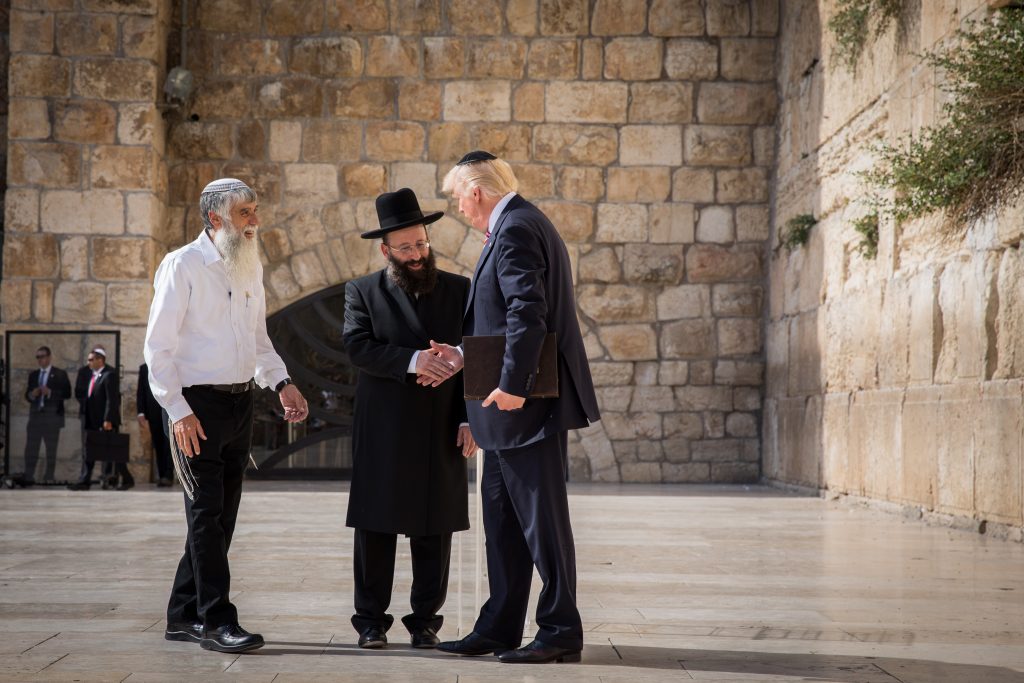 YERUSHALAYIM – President Trump’s visit to Israel on Monday was over, as far as we were concerned, at 3:57 p.m. Israel time.

The president took the kippah out of his pocket, placed it on his head, and with great reverence approached the stones of the Kosel in Yerushalayim, the eternal city of our people. He touched the stones and appeared to say a prayer for the fate of the world and his own fate, after which he removed a folded note from his pocket and inserted it in a crevice in the Wall.

This was the apex of the visit.

Whatever he has said, and will say tomorrow, it will not compare to this emotional moment. At the same time, his daughter stood at the Kosel in the women’s section, nodding her head and unable to hold back her tears.

It was an historic moment, the first of its kind by a sitting president, in which he opened a sefer Tehillim in his hands and, while standing in the City of David, read aloud over and over, “Our legs stood in your gates — Yerushalayim, Yerushalayim, habenuya” (the rebuilt), a city united.”

And on his way back, with his son-in-law Jared Kusner on one side and Secretary of State Rex Tillerson flanking him on the other, we noticed the rav of the Kosel swiftly remove the note Trump had inserted, so that the incident would not be repeated involving another high official whose personal note in the Kosel was taken by someone and made public.

Mr. Trump, we must say, appeared to be moved by the experience. He stepped away from the stones, turned to sign the guest book. He paused briefly to gather his thoughts, and wrote, “It was a great honor for me to be here — Shalom.”

But our day with the rest of the president’s entourage began long before this.

The journalists were asked to arrive five hours before the Air Force One was scheduled to land. “Take heavy traffic conditions into consideration,” the organizers at the Prime Minister’s Office warned us.

On the way to Ben Gurion Airport on Monday morning, it occurred to us that we might have gone on the wrong day. The highway was almost empty; no people, no vehicles. Israelis, who are used to being faced with highway closures when foreign dignitaries come to visit, this time decided to stay home.

Schools in Yerushalayim reported that only 50 percent of the students arrived for classes. The rest were home, observing the “festival of Trump.” If the parents are home, there’s no reason to send the kids to school.

But the closer we got to the airport, the more Israeli security forces were in evidence, on vacation from chasing after Palestinian terrorists and stone-throwers. They were all there. Police, Shin Bet, elite units.

Yet, the Americans were taking no chances, taking every possibility of harm to the president into account. They stationed 20 officers at Hadassah hospital in the event that something might happen to him, and to ensure that the medical staff would be ready. They discovered that the hospital is on alert all year long.

The Americans were calmed by this. The president’s doctors were impressed as well by the high level of treatment offered. In particular, they were impressed when the head of the trauma unit, Dr. Avi Rifkind, told them: “For the 26 hours that the president is in the country, I do not move from this place. They set up a bed for me, but hopefully they won’t need me.”

At Ben Gurion, President Trump received a welcoming that outdid all the welcoming ceremonies that have ever taken place in Israel over the last 70 years.

President Trump did not merely arrive. We almost overlooked the fact that he flew in directly from Riyadh, Saudi Arabia. Don’t think it’s a simple matter. I remember covering the visit of then-Secretary of State Henry Kissinger in the Saudi kingdom during the 1970’s. I covered it from Israel, of course, because back then not only would they not permit a Jewish or Israeli journalist into the kingdom; they even gave the Jewish secretary of state a hard time.

And here, a few decades later, the president, accompanied by his Jewish daughter and son-in-law and numerous Jewish aides — including those who did not forget to take their taleisim and tefillin with them for the trip, davening on the plane — not only landed there, but also took off from Riyadh on the 50-minute fight directly to Israel.

What has happened to us in those intervening years?

To us, not a lot has happened.

Something has changed in the Middle East, but not to the Jews. The Arabs, especially their leaders, have come to realize that their real problem is not the state of Israel, but the extremists in their own home. And they are willing to accept help from Israel in the struggle that they now face. As a result, the route from Riyadh to Israel has opened.

In his welcoming remarks, Israeli Prime Minister Binyamin Netanyahu expressed his hope that the route from Riyadh inaugurated by Mr. Trump will turn into an official route. He was hinting at what only a few have been privy to, that there is already an unofficial one, traveled by a number of officials on both sides.

The entire upper echelon of Israeli officialdom was there to meet Trump at the airport — Netanyahu, Rivlin, almost all the ministers, the chief rabbis, the judges of the High Court, the media, and more. President Trump initially had sought to avoid so much handshaking, but the enthusiasm of the Israelis to at least briefly meet him was more than he could resist. Who, they wanted to know, is this person, that the global media is constantly attacking?

Yet, from the distance we were able to view him from, he appeared quite at ease. Much more so than he appeared in images from Riyadh. Here in Israel, apparently, he feels at home.

In a welcoming speech of less than three minutes, Netanyahu expressed what all Israelis wanted to say, to thank him for his speech in Saudi Arabia, in which he called on the leaders of the world to spit out the terorrists and extremists in their midst, calling on the forces of civilization to stand up to the forces of barbarism.

President Trump sat back on a couch brought from somewhere in the airport, wiped beads of perspiration from his brow, and waited for the ceremony to end.

Rarely has the name of the Almighty been invoked so many times in one day at Ben Gurion. President Reuven Rivlin opened with “G-d bless America.” Netanyahu offered the same blessing for both Israel and America three times. President Trump mentioned

Trump spoke, saying how glad he was to be in Israel, that he had found new reasons to be hopeful about a peaceful future during his visit in Saudi Arabia.

The atmosphere of the visit, it is already possible to conclude, has been positive and friendly. President Trump and Netanyahu then went off for an afternoon rest, while we continued to report the day’s events.