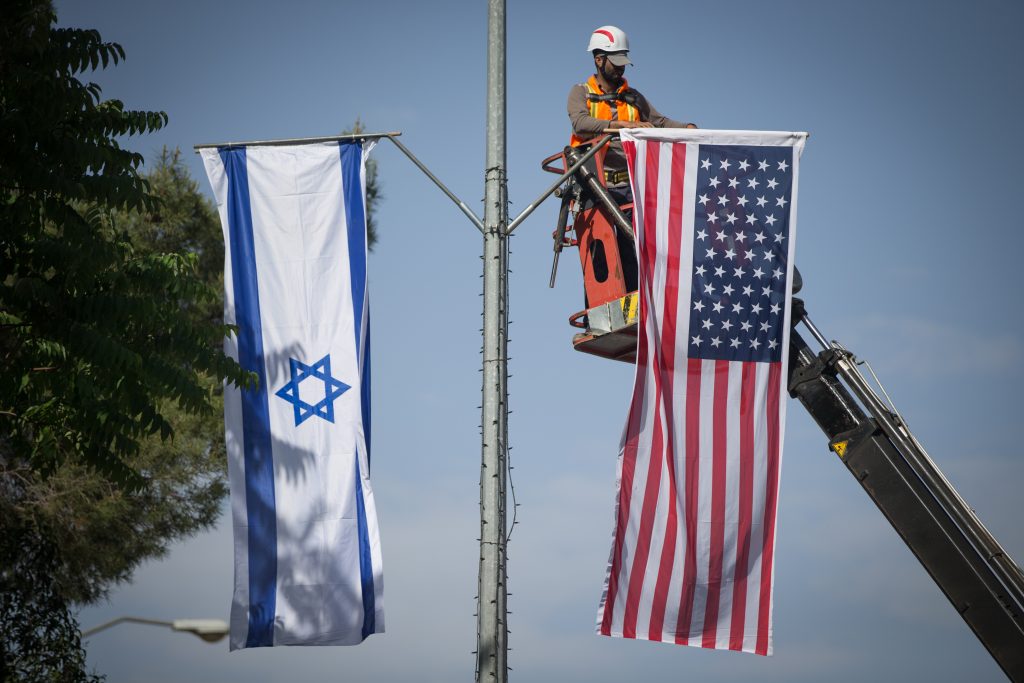 Tonight, at 6:00 pm. Israeli time, all preparations were finished and at midday tommorow, the President of the United States, Donald Trump, will land in Israel as part of his first international trip.

More than 40 American cargo planes have already landed in Israel, bringing with them the president’s security detail, his helicopters and vehicles, and most importantly, his many cabinet secretaries and advisors, including the Secretary of State and Secretary of Defense, national security officials and a series of official spokespeople.

America is moving to Israel for the 27-hour long visit. While it is not long, there is a packed schedule as the president moves from place to place and between the Israelis and the Palestinians.

At 12:15 it will happen: Air Force One, and an identical plane that always follows it, will land at Ben Gurion Airport in a rare direct flight from Riyadh to Israel. The aircraft carrying the many journalists accompanying the president did not fly directly and had a refueling stop in Cyprus. Is there a message inherent in this? Possibly.

But those close to the president tell their Israeli counterparts the entire time that they should not notice the small details. They think the visit will be very successful because both sides are interested in emerging with positive conclusions.

The president, some of his advisors said, plans to tell Prime Minister Netanyahu: “I expect good talks with you that will bring about a restart to the peace talks with the Palestinians. Less than that will be a failure.” And neither side wants a failure and all will do whatever possible to ensure success until the president departs on Tuesday at 4:00 p.m. local time with a smile on his face.

Israel’s security cabinet convened on Sunday evening for a preparatory meeting, and heard reports from behind the scenes about messages conveyed by the president himself in a conversation with the prime minister. The president’s advisors have tried to calm the Israelis, after anxiety has mounted in recent days. The cabinet decided on a series of gestures to the Palestinians, most of them economical. The objective of the gestures, the ministers were told, was to generate a good feeling ahead of the visit and ahead of Ramadan, which begins at the end of this week.

The cabinet decisions were not unanimous. Jewish Home Ministers Naftali Bennett and Ayelet Shaked voted against some of them, and they were approved 8-2. For example, the cabinet decided to allow the Palestinians to receive construction permits in Area C that is under Israeli control, and to open industrial zones in Jalama and Tarkumiyeh to Palestinian construction and to thousands of new Palestinian workers. It was also decided that starting now, the Allenby Crossing will be open 24 hours a day.

At the beginning of the meeting, Netanyahu told the ministers: “U.S. President Donald Trump is coming tomorrow for a historic visit to the State of Israel, together with senior officials in the administration and the White House. This is President Trump’s first trip out of the United States, and it is an honor for us that he chose to visit Yerushalayim, the capital of Israel, and of course the State of Israel, on this visit.

“I will discuss with President Trump ways of strengthening our alliance with America even further; we will strengthen security ties. They are getting stronger every day. We will also discuss ways of advancing peace. Mr. President, the citizens of Israel are waiting for you with open arms.”

During the meeting, an argument broke out between Prime Minister Netanyahu and some of the ministers, who said they would not be attending the welcoming ceremony for the president at the airport. Netanyahu got angry and instructed all of the ministers to be at the airport. Some of them had considered staying away after learning that the president had no intentions of shaking their hand, and that they would have to go through security checks like any citizen.

From the airport, the president will take off in a helicopter for Yerushalayim. He will land in the parking lot of the old rail station complex, and from there, he will go to the president’s residence for a short ceremony before continuing his itinerary. The main item on the day’s agenda is the meeting with Prime Minister Netanyahu. This meeting will be divided between the first hour and a half, which will be one-on-one, and a dinner later on that will include the family members of both leaders.

Trump and his entourage have been conveying constant messages that they will do everything they can to have the visit end successfully. Israel also wants success, but hopes that the president won’t demand of Israel things that Israel will not be able to abide by, such as a massive construction freeze all over, including Yerushalayim.

Mr. Trump already said at the beginning of the week that he will not force the sides to do things they don’t want to do, but that both sides had to understand that they had to return to the negotiating table without preconditions.

On Sunday evening, at the opening of celebrations marking 50 years since the reunification of the city, Prime Minister Netanyahu noted that the country would be welcoming a guest who is a true friend of Israel. PM Netanyahu declared that Yerushalayim was not occupied, but rather liberated, and it would forever remain united with all its components, including the Kosel and Har Habayis, under Israeli sovereignty.

Mr. Trump will visit Bais Lechem during his visit and will meet with PA chairman Mahmoud Abbas. At first, he also planned to visit one of the churches in the city, but when he learned that a group of former prisoners had erected a solidarity tent with prisoners who are on a hunger strike in Israeli prisons, he decided to cancel that stop. After meeting Abu Mazen he will immediately return to Yerushalayim. The city will be experiencing endless traffic jams with convoys going from here to there. Each convoy of the president numbers between 60 and 100 vehicles, and includes ambulance and senior medical teams, firefighting vehicles and lots and lots of security guards.

We are preparing for the unexpected, security sources say. Many of them haven’t slept in days, and now the two pivotal days are here. “We will breathe a sigh of relief after the president’s plane takes off on Tuesday afternoon and we see him in the air,” they say.