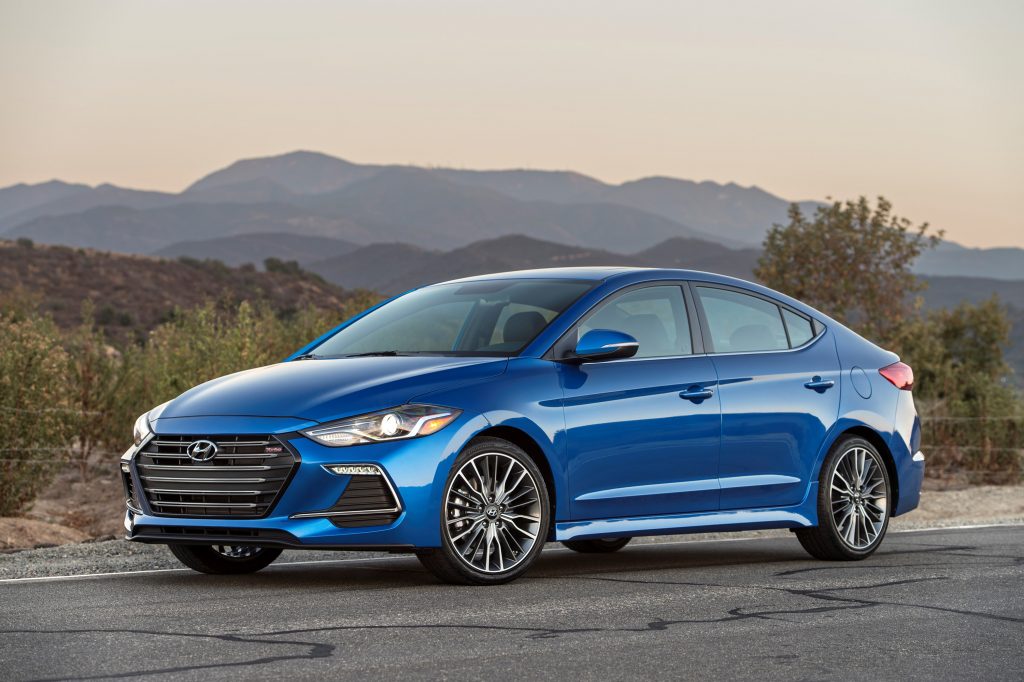 Spring weekends: When dreams of winding backwoods roads come crashing down under the domestic weight of lawn care and countless family chores. Such obligations can feel less obligatory if you have a fun enough car.

The Elantra has long been a best buy for being roomy, fuel-efficient, and well equipped at under $20,000. The challenge for the Sport is to distinguish itself enough from its namesake while not daring to take on value performance benchmarks such as the Golf GTI or Subaru WRX, which cost at least 10 to 15 percent more on average.

The compact Sport sedan is more of a consideration against the Mazda3 Grand Touring or Honda Civic Touring, and costs about $1,500 less.

It retains its value despite being the priciest of three Elantra models, which includes the $17,150 base model with a 2-liter turbo four, or the $20,650 Eco with a 1.4-liter turbo that gets 40 mpg highway. To stay competitive in this contracting compact segment, Hyundai redesigned the 2018 Elantra GT hatchback to hit dealer lots this summer.

The Sport is not just some badging and fancy flourishes. It comes with 18-inch wheels and a dual exhaust that buff up its edges. The rocker panels on the doors are more pronounced, and the hexagonal grille extends at its widest point into horizontal LEDs.

The long wheelbase and low stance reminded us of the Subaru Impreza. The Galactic Gray paint is like a mood ring, mercurial under cloud cover, brash in daylight, sleek at night. Getting in and out of it in a crowd evoked a modest sense of pride — it’s sharp without being flashy.

The biggest change over the pokey Elantra is the turbocharged engine, which boosts torque from 132 to 195 pound-feet. There’s plenty of punch, without hitting sport mode. Turbo lag from a stop takes some getting used to, but otherwise the throttle is responsive. Sport mode delays shifts on the seven-speed dual-clutch transmission. The transmission is smooth but gets a little muddled the harder you hit the throttle. Using the more responsive paddle shifters gave us a chirp or two going into second. We didn’t get to test the six-speed manual ($1,100 less), which would have given us a better idea of how it stacks up against the lovely Mazda3.

Handling on the Sport is crisp, without the roll of the Sentra SR. It handles closer to the Mazda3 than the Civic, which is larger, comfier, but not as fun to drive. The flat-bottomed sport steering wheel feels good in the hands, though the steering doesn’t pick up everything from the road. There was some minor torque steer — the steering wheel pulled to the left when flooring it from a stop.

On the highway, the Sport stretches out in a quiet, efficient ride. At 60 mph, we averaged 34 mpg.

The blacked-out interior complements the sense of looks good, feels better. Seat bolstering is firm without being tight, and the black leather everywhere has subtle red stitching showing an attention to detail. There’s plenty of room for 4 adults.

A few years ago, Hyundai’s Blue Link infotainment system was one of the best mainstream models. It hasn’t changed much, so it’s starting to lag behind the competition. It relies too much on the touch screen. The navigation buttons are narrow and the screen layout and defaults take some getting used to. Voice commands are slow to respond. Apple CarPlay is better across the board.

The Elantra Sport holds its own in a crowded class of well-appointed compacts, priced just below the competition. It’s a comfortable highway cruiser and nimble around town.

2017 Hyundai Elantra Sport at a Glance