Business AUTO REVIEW: The Hatch Is Back on a Civic Like No Other
Business 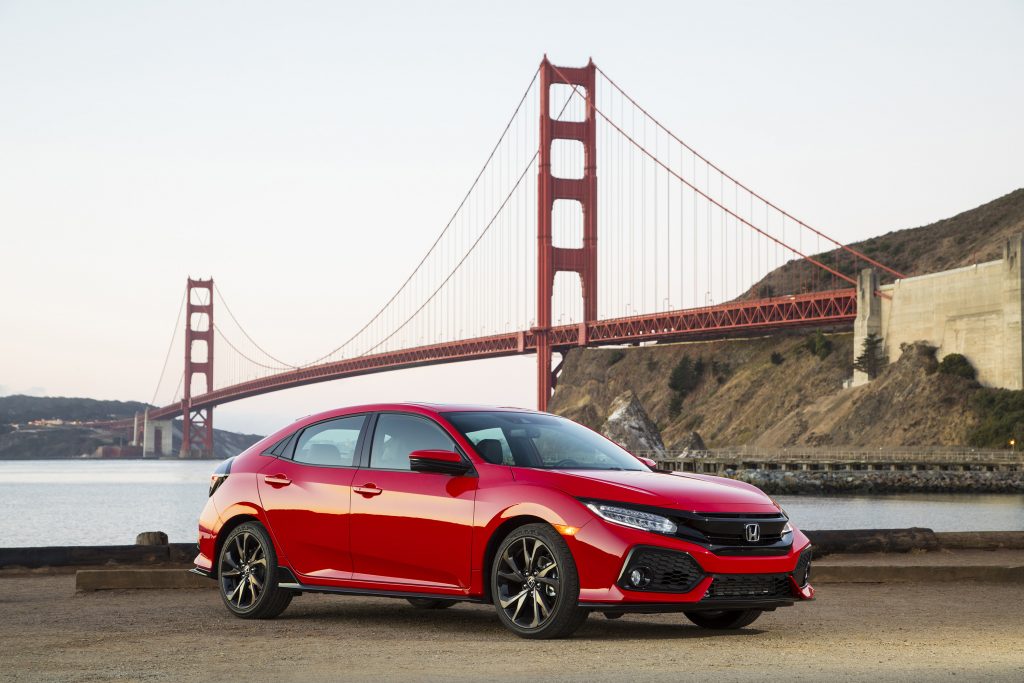 American Honda Motor’s spokesmen told me their company was selling a new hatchback in the United States. I thanked them for the information and filed it somewhere in the back of my cluttered mind.

Hondas are among my favorite cars. But, let’s face it, the little Civic, be it sedan, coupe or hatchback — and it hasn’t been hatchback in America for a while — has never been a style leader. It always has been a wonderfully ordinary little car — remarkable for its reliability, efficiency and safety. Except in 2008–2009, when Japanese supplier Takata smeared its safety reputation with fatally faulty air bags.

Honda has been fighting back ever since and doing a very good job of it, but not good enough for me to be excited by news of a new Civic hatchback.

Still, it helps to keep an open mind. It protects you from having yours blown, as mine almost was when the 2017 Honda Civic Sport Touring hatchback was delivered to my driveway.

It is a hatchback with attitude, certainly the most attractive Civic I’ve ever seen. It wears a sporty front fascia, sculptured side panels and an uplifted rear that gives the compact, front-wheel-drive car an in-flight appearance.

At first, about the second day behind its wheel, I thought the new styling was too much, too bold a departure from the vanilla approach to reality that characterized predecessor Civics. I radically changed my mind by the end of the week.

Whoever thought of this new Civic hatchback design should get a promotion or a raise. Seriously. People in my generation, baby boomers who have “seen it all,” loved the excellently functional, simple-as-a-straight-line early Civics.

They were a welcome counter to the chrome-laden, gas-guzzling, almost-as-dysfunctional-as-a-politician cars rolling out of Detroit.

Note to the Trump administration: You might want to do a serious, academic study of the U.S. automobile industry. You’ll find that American companies didn’t start making their cars elsewhere solely in pursuit of cheaper foreign labor. Asian and European auto manufacturers forced them to start producing automobiles that Americans and almost everyone else preferred — cars such as the little Civic. And, now, Honda has upped the ante again.

The 2017 Civic hatchback is offered in two trim levels, Sport and Sport Touring. They are both snazzy. But the Sport Touring has discernibly more attitude. It appeals to a younger generation — folks who love functional simplicity but who also have a highly technical sense of style.

The Civic Sport Touring gives it to them.

It also gives them a turbocharged 1.5-liter, gasoline four-cylinder inline engine that delivers a respectable 174 horsepower and 162 pound-feet of torque.

To me, the little Civics usually have been noisy cars, prone to battering by high winds and rumbling on rough roads. The 2017 model is substantially quieter, although not as quiet as one might expect given its aggressive wind-cheating styling.

Bottom line: The 2017 Honda Civic hatchback — Touring or Sport Touring — belongs on the Top 10 list of anyone shopping for a compact automobile. It is hard to find a better small car.

Ride, acceleration and handling: Ride is good for a small wheelbase (106.3-inch distance front to rear wheels) car. It has all the acceleration you need for safe high-speed highway running. The ride is good enough for long-distance driving.

Head-turning quotient: I was stopped by seemingly everybody. True story: A man in the District of Columbia driving a new, bright red Corvette with chromed wheels honked furiously to get my attention. I lowered my passenger window. “Is that the new Honda with the big engine?” he asked. “It’s the new Civic hatchback with the turbo 1.5-liter four,” I replied. “1.5?” he asked, incredulously. “You kiddin’ me?” He vroomed away before I could answer. Then, I realized the hair left on his head was as thin and gray as mine.

Body style/layout: The Civic hatchback is a compact, front-engine, front-wheel-drive car with four side doors and a rear hatch. There are two trim levels — Sport and Sport Touring.

Engine/transmission: It comes with a turbocharged 1.5-liter, 16-valve, four-cylinder gasoline engine with variable valve timing (174 horsepower, 162 pound-feet of torque). The engine is linked to a continuously variable automatic transmission.

Capacities: Seating is for five people. Cargo capacity with all seats in place is 25.7 cubic feet. The fuel tank holds 12.4 gallons of gasoline. Regular is fine.

My mileage: I averaged 40 miles per gallon in highway driving, obeying (or trying to) the posted speed limits.