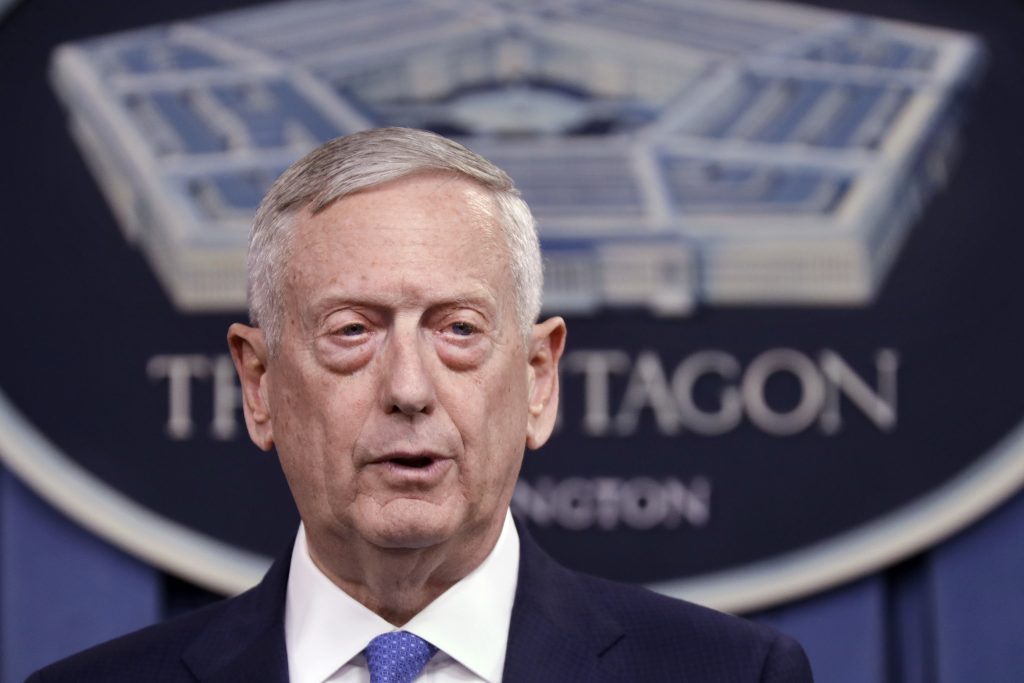 The U.S. defense chief warned Friday that a military solution to the standoff with North Korea would be “tragic on an unbelievable scale,” while the North vowed to rapidly strengthen its nuclear-strike capability as long as it faces a “hostile” U.S. policy.

North Korea tested a longer-range missile last weekend, which experts say was a significant advance for a weapons program that aims at having a nuclear-tipped missile that can strike America. The test triggered a new U.S.-backed push for a fresh round of U.N. sanctions against the North.

At the United Nations, North Korea’s deputy ambassador, Kim In Ryong, was defiant. He said North Korea would never abandon its “nuclear deterrence for self-defense and preemptive strike capability,” even if the U.S. ratchets up sanctions and pressure “to the utmost.”

Speaking to reporters, Kim hailed the test launch and said that if the Trump administration wants peace on the divided Korean Peninsula, it should replace the armistice that ended the 1950-53 Korean War with a peace accord and halt its anti-North Korea policy.

At the Pentagon, Defense Secretary Jim Mattis said the missile test showed North Korea isn’t heeding cautions from the international community. However, he stressed the need for a peaceful resolution by working through the U.N. with countries including China, the North’s traditional ally and benefactor.

“If this goes to a military solution it is going to be tragic on an unbelievable scale, and so our effort is to work with the U.N., work with China, work with Japan, work with South Korea to try to find a way out of this situation,” Mattis said at a news conference.

He said North Korea “probably learned a lot” from last weekend’s test. He said the missile went very high and came down, but he would not characterize it as demonstrating the controlled re-entry of a missile.

Guiding a long-range missile to a target on return to earth is a key technological hurdle that North Korea must overcome in trying to perfect a missile that could threaten the United States. The North also probably has a way to go before it can miniaturize a nuclear warhead to mount on such a missile.

All 15 members of the U.N. Security Council, the world organization’s most powerful body, this week called the launch a violation of existing sanctions and vowed to take new measures, including additional sanctions.

Before an emergency meeting of the council Tuesday, U.S. Ambassador Nikki Haley declared: “You either support North Korea or you don’t, but you have to choose. You have to pick a side.”

Kim accused the council of playing “to the tune of the U.S. again” and protested the Trump administration’s demand for countries to choose allegiance between the United States and the Democratic People’s Republic of Korea, his country’s official name.

President Donald Trump is looking to both China and Russia, the two permanent members on the Security Council that have historically been most sympathetic to North Korea, to join the U.S.-backed campaign of diplomatic and economic pressure on the North to get it to denuclearize.

Asked about Beijing and Moscow’s support for the six previous rounds of U.N. sanctions, Kim said both countries are “close neighbors” who “understand our nuclear projection occurred through the U.S.’ continued nuclear threat and its hostile policy” toward North Korea.

If the United States “persists in anti-DPRK sanctions without understanding its rival, the [Trump] administration will have to take full responsibility for the ensuing catastrophic consequences,” he warned.

“The U.S. should mind that the DPRK’s nuclear striking capability will be strengthened and developed at a rapidly high speed as long as the U.S. insists [on] its anti-DPRK policy, nasty nuclear threats and blackmails, sanction and pressure,” Kim said.