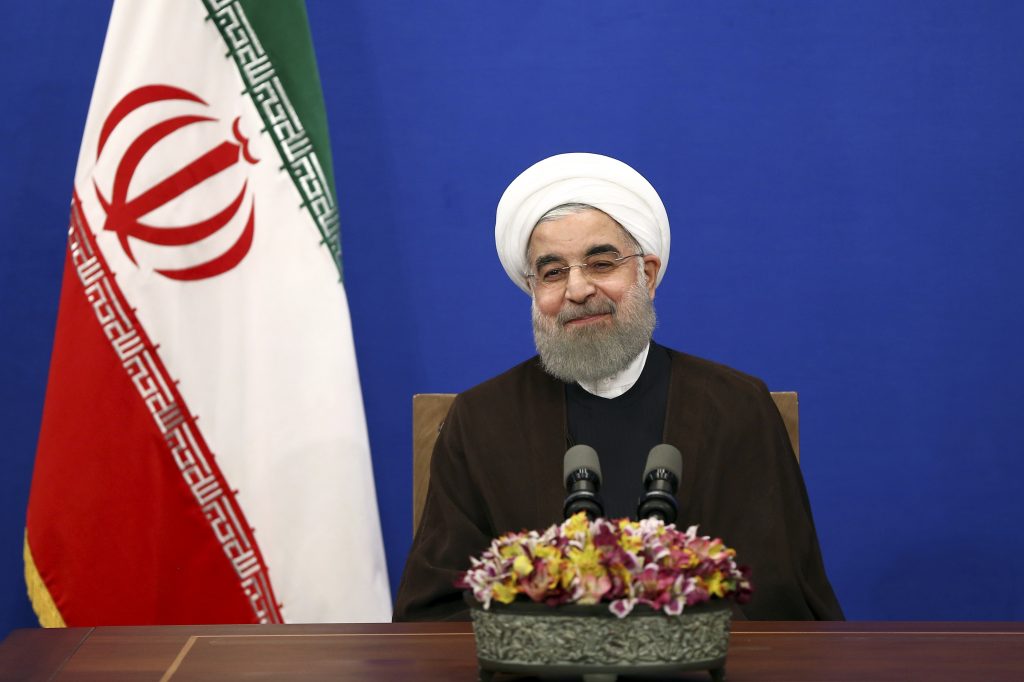 President Hassan Rouhani pledged on Saturday to open Iran to the world and deliver freedoms its people have yearned for, throwing down a defiant challenge to his hardline opponents after securing a decisive re-election for a second term.

Rouhani, long known as a cautious and mild-mannered establishment insider, reinvented himself as a bold champion of reform during the election campaign, which culminated on Friday in victory with more than 57 percent of the vote. His main challenger, hardline judge Ebrahim Raisi, received 38 percent.

In his first speech after the result, Rouhani appeared to openly defy conservative judges by praising the spiritual leader of the reform camp, former President Mohammad Khatami. A court has banned quoting or naming Khatami on air.

“Our nation’s message in the election was clear: Iran’s nation chose the path of interaction with the world, away from violence and extremism,” Rouhani said.

U.S. Secretary of State Rex Tillerson, whose country has had no diplomatic relations with Iran since 1980, said he hoped Rouhani would use his second term to end Tehran’s ballistic missile program and what he called its network of terrorism. Iran denies any involvement in terrorism and says its missile program, which President Donald Trump recently targeted with new sanctions, is purely for defense purposes.

Although the powers of the elected president are limited by those of unelected Supreme Leader Ayatollah Ali Khamenei who outranks him, the scale of Rouhani’s victory gives the pro-reform camp its strongest mandate in at least 12 years to seek the sort of change that hardliners have thwarted for decades.

Rouhani’s opponent Raisi, a protege of Khamenei, had united the conservative faction and had been tipped as a potential successor to the 77-year-old supreme leader. His defeat leaves the conservatives without an obvious flag bearer.

The re-election is likely to safeguard the nuclear agreement Rouhani’s government reached with global powers in 2015, under which most international sanctions have been lifted in return for Iran curbing its nuclear program.

And it delivers a setback to the Revolutionary Guards (IRGC), the powerful security force which controls a vast industrial empire in Iran. They had thrown their support behind Raisi to safeguard their interests.

Thousands of people gathered in central Tehran to celebrate Rouhani’s victory. Videos on social media showed young people clapping and chanting, “We love you Hassan Rouhani, we support you.”

During campaigning, Rouhani promised to seek their release if re-elected with a stronger mandate.

Rouhani, 68, faces the same limits on his power to transform Iran that prevented him from delivering social change in his first term, and that thwarted Khatami, who failed to deliver on a reform agenda as president from 1997-2005.

But by publicly thanking “my dear brother, Mohammad Khatami” in his victory speech, Rouhani seemed to take up that mantle. It was a remarkable challenge to the Shiite Muslim religious judicial authorities, who have blacklisted Khatami from public life for his support for other reformists under house arrest.

Many experts are skeptical that a president can change much in Iran, as long as the supreme leader has veto power over all policies and control over the security forces. Some said the pattern was all too familiar from Rouhani’s first victory four years ago and Khatami’s victories the previous decade.

“The last two decades of presidential elections have been short days of euphoria followed by long years of disillusionment,” said Karim Sadjadpour, senior fellow at the Carnegie Endowment who focuses on Iran.

“Democracy in Iran is allowed to bloom only a few days every four years, while autocracy is evergreen.”

The re-elected president will also have to navigate a tricky relationship with Washington, which appears at best ambivalent about the nuclear accord agreed by former President Barack Obama. President Trump has repeatedly described it as “one of the worst deals ever signed,” although his administration re-authorized waivers from sanctions this week.