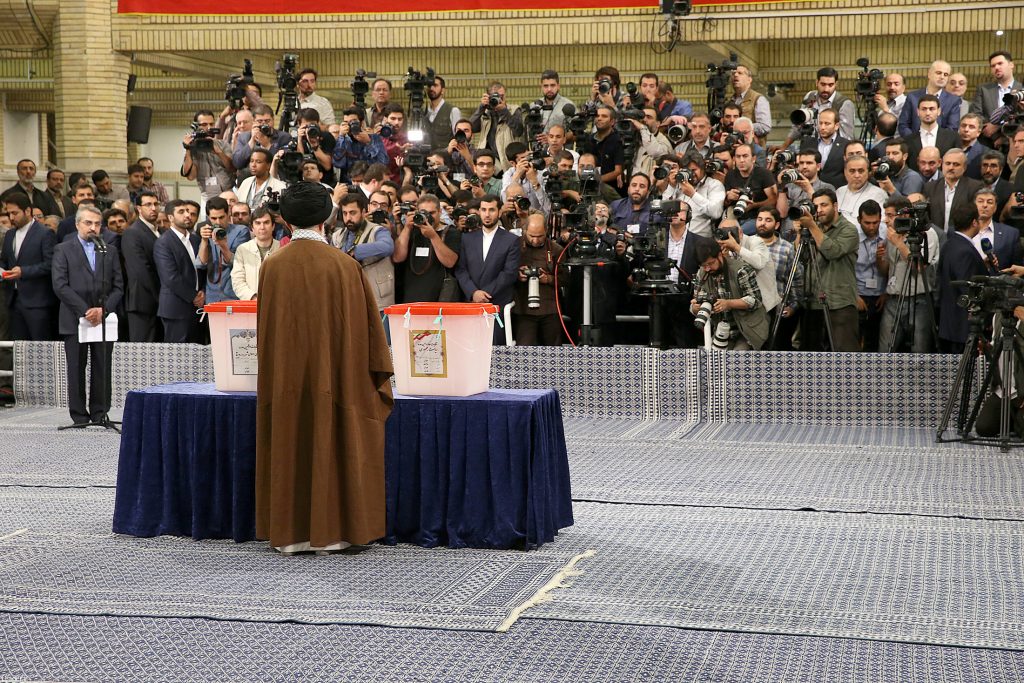 Iranians voted in fiercely contested presidential polls on Friday, standing in long lines to choose between Hassan Rouhani, the incumbent who wants normal ties with the West, and a populist challenger backed by powerful security hawks.

“Everyone should vote in this important election…. The country’s fate is determined by the people,” Supreme Leader Ayatollah Ali Khamenei said, casting his ballot in Tehran as lengthy queues formed across the country of 80 million.

In a warning reflecting rising political tensions amid signs of an unexpectedly close race, Rouhani has urged Iran’s powerful elite Revolutionary Guards, believed to support his conservative opponent Ebrahim Raisi, not to meddle in the vote.

Suspicions that the Guards and the Basij militia under their control falsified voting results in favor of hardliner Mahmoud Ahmadinejad led to eight months of nationwide protests in 2009. Dozens of people were killed and hundreds arrested, human rights groups say, in the worst unrest to hit the Islamic Republic.

“I am on my way to vote for Rouhani. I like his detente policy with the world. I know he is not a reformist but who cares. What matters is that he is not Raisi,” government employee Yousef Ghaemi, 43, said by phone in the western city of Kermanshah.

“I cast my vote already – I voted for Raisi because he is a follower of Imam Khamenei. He will not confront the leader (Khamenei) if elected. He will protect our Islamic identity,” said Mehran Fardoust, 36, a shop keeper in the city of Mashhad, Raisi’s home town.

Raisi, 56, and Rouhani, 68, traded charges of graft and brutality in debates with an open vehemence unseen since the 1979 Islamic Revolution. Both deny the other’s accusations.

State media showed lengthy queues forming outside polling stations in several cities and said 56 million Iranians out of the more than 80-million-strong population were eligible to vote.

“But it is a risky decision. It might cause protests similar to those in 2009, as different walks of the society, desiring evolution inside the establishment, have united against Raisi.”

The Guards hope that a win for Raisi will give them an opportunity to claw back economic and political power lost in Shi’ite Iran’s complex theocratic and republican governing structure since 2015, when Iran struck a nuclear deal with world powers that brought it out of international isolation.

Although Khamenei is guarded about his political preferences, he appears to back Raisi both as a presidential candidate and possible successor.

But in an apparent reference to the 2009 disturbances, Khamenei, an unelected clerical hardliner who has the ultimate say in Iran, has previously warned he would confront anyone trying to interfere in the election.

Rouhani, who championed the deal to lift most sanctions on Iran in return for curbs on its disputed nuclear program, is a staunch supporter of engagement with the West and liberal reforms to the economy, now dominated by state institutions.

He also says a hardline victory could put Iran back on a more confrontational, economically damaging course with the West, and would prevent the opening of society that a majority of Iranians, especially the youth, yearn to see.

But hardline rivals hammered Rouhani over his failure to boost an economy weakened by decades of sanctions, even after most were rescinded following the nuclear agreement.

Despite the removal of nuclear-related sanctions in 2016, lingering unilateral U.S. sanctions that target Iran’s record on human rights and terrorism have kept many foreign companies wary of putting stakes in the Iranian market.

A protégé of Khamenei, Raisi focused his campaign on the economy, visiting rural areas and villages, promising housing, jobs and more welfare benefits for the poor.

Analysts have rejected Raisi’s promises of jobs and cash handouts as unrealistic but admit these could win traction with voters who have felt few benefits so far from the nuclear deal.

Raisi, a long-serving member of the judiciary who was one of four judges who sentenced thousands of political prisoners to death in 1988, gathered the hardline camp behind him after other conservative candidates dropped out of the race.

But analysts agreed that the gathering of Khamenei’s powerful allies behind Raisi seemed to have the unintended effect of energizing Rouhani’s supporters, uniting opposition and pro-reform figures, artists and activists to back his re-election.

The campaign was replete with caustic debates and bruising broadsides. Raisi accused Rouhani of “economic elitism, mismanagement, yielding to Western pressure, and corruption.”

Rouhani hit back in a sharper campaign strategy to mobilize Iranian women and young people who became jaded about the vote after losing hope in his ability to ease religious repression in society as promised in 2013, when he won by a landslide.

While the vote may not have a decisive influence on foreign policy, which is set by Khamenei, the election of a hardliner could harm Iran’s global image and further deter foreign trade and investment seen as vital to rebuilding the economy.

Some 350,000 security forces were deployed around the country to protect the election, state medium reported.

Polls close at 6 p.m. local time, although authorities often extend voting into the evening. Ballot counting will start at midnight and final results are expected within 24 hours of polls closing, the semi-official Fars news agency said. The elections are also for city and village councils.