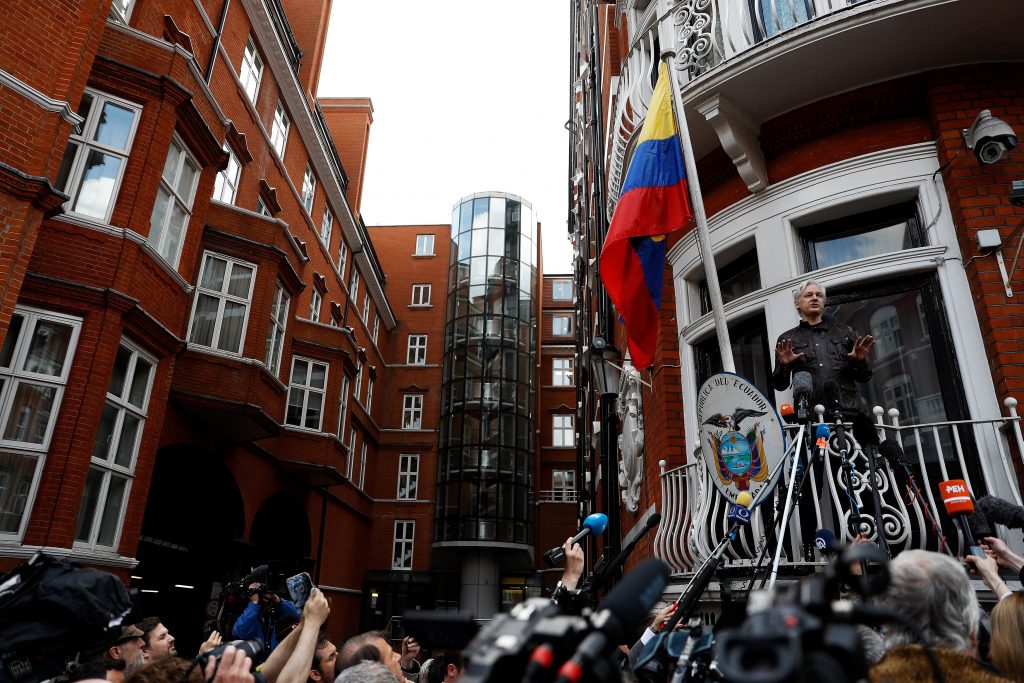 Swedish prosecutors on Friday dropped an investigation of WikiLeaks founder Julian Assange over a criminal charge in Sweden unrelated to WikiLeaks, but British police said he would still be arrested if he left the Ecuadorean embassy in London where he has been holed up for five years.

Assange took refuge in the embassy in June 2012 to avoid extradition to Sweden after the criminal investigation was opened. He feared Sweden would hand him over to the United States to face prosecution over WikiLeaks’ publication of swathes of classified military and diplomatic documents in one of the largest information leaks in U.S. history.

Appearing on the balcony of the embassy after the Swedish announcement, Assange, 45, said he was ready to talk to Britain “about what is the best way forward” and with the U.S. Department of Justice, but also defended his right to stay put.

“The road is far from over. The war, the proper war, is just commencing,” he told supporters and media after raising a clenched fist in a gesture of victory.

Police in London said they were still obliged to arrest Assange if he left the embassy for skipping bail. They said that would be a far less serious offense than the crime Sweden had been investigating, but if convicted he could still face up to a year in jail.

Earlier on Friday, Swedish Chief Prosecutor Marianne Ny said the criminal investigation could not proceed due to legal obstacles.

“We are not making a statement about his guilt,” Ny said, adding that the investigation could be reopened if Assange came to Sweden before the statute-of-limitations deadline in 2020.

Assange’s lawyer, Per Samuelson, hailed Sweden’s decision to drop the investigation as “a total victory for us.”

Assange always denied the Swedish allegations and said they were a ploy to get him whisked off to the United States.

In January, Assange said he stood by an offer to go to the United States providing his rights were upheld and if former military intelligence analyst Bradley Manning, who was responsible for a 2010 leak of classified materials to WikiLeaks, was freed.

Manning was released on Wednesday after spending seven years in a U.S. military prison for passing the documents to WikiLeaks. Manning had been sentenced to 35 years in prison, but the sentence was commuted by President Barack Obama shortly before he left office.

British Prime Minister Theresa May said on Friday that it would be “an operational matter for the police” to decide whether to arrest Assange if he left the embassy.

Asked if she would support Britain extraditing Assange to the United States, she said, “We look at extradition requests when we receive them on a case-by-case basis.”

While Assange may still not be able to leave the embassy in the upmarket Knightsbridge area of London, the Swedish prosecutor’s decision to drop the investigation brings to an end a seven-year stand-off with Sweden.

The Ecuadorean government welcomed the decision, and in a statement called on Britain to grant Assange safe passage to Ecuador. Foreign Minister Guillaume Long said Assange was welcome to stay in the embassy if this was not granted.

“As long as we fear that this is a case of political persecution … as long as we fear for Mr. Assange’s integrity and human rights, we will continue with our policy of offering him asylum,” Long said in a telephone interview.

He said that recent statements by U.S. President Donald Trump and Attorney General Jeff Sessions indicating that United States authorities would seek to arrest Assange were a sign that he still faces persecution outside Britain.

Last month, CIA Director Mike Pompeo called WikiLeaks a “hostile intelligence service,” and Sessions, responding to a question about Assange, said the Trump administration was stepping up its efforts against all leaks of sensitive information.

“Whenever a case can be made, we will seek to put some people in jail,” Sessions said.