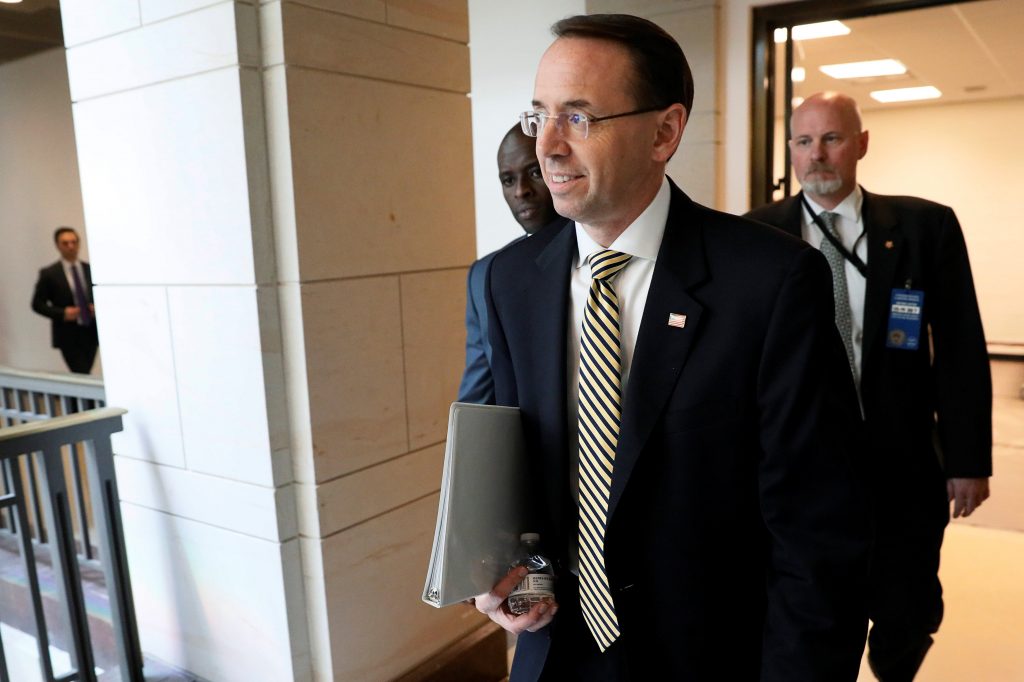 Deputy Attorney General Rod Rosenstein told the full Senate he knew that former director James Comey would be fired before he wrote his controversial memo that the White House initially used as justification for President Trump firing the FBI director.

Sen. Richard Durbin, D-Ill., said that Rosenstein told the senators that he knew on Monday, the day before Comey was fired, that Trump was going to fire him. He also told them that he was not pressured into writing his memo.

“He learned the president’s decision to fire him and then he wrote his memo with his rationale,” Durbin said.

The day after Rosenstein appointed a special counsel to investigate possible coordination between Trump’s associates and Russian officials, he appeared before the Senate on Thursday afternoon to brief senators in a closed session.

Rosenstein received support from the Senate a month ago when he was confirmed by a vote of 94 to 6 to be the Justice Department’s second-highest-ranking official. But his reputation has come under fierce attack in the past week over a memo he wrote about James Comey that the White House initially used as a justification for Trump to fire the FBI director.

Since Comey’s firing on May 9, the calls for Rosenstein to appoint a special counsel have intensified, especially from Democratic lawmakers who believe he can longer be impartial in the Russia investigation, given his role in the firing. Rosenstein was put in charge of the Russia investigation as soon as he was confirmed because Attorney General Jeff Sessions recused himself after The Washington Post revealed contacts he had with the Russian ambassador that he had not reported when asked about it during his Senate confirmation hearing.

Rosenstein’s 2:30 p.m. briefing with the Senate was scheduled before he announced late Wednesday that he was appointing Robert Mueller, a former prosecutor who served as FBI director from 2001 to 2013, to take over the Russia investigation as special counsel.

To emphasize the independence of his decision, Rosenstein did not notify White House counsel Donald McGahn of the appointment until 5:30 p.m., the same time Justice Department officials were briefing reporters and 30 minutes before the news became public.

Trump tweeted early Thursday that he was the victim of a “witch hunt” and expressed anger that a special counsel hadn’t ever been appointed to investigate Hillary Clinton or former president Barack Obama for their “illegal acts.”

“With all of the illegal acts that took place in the Clinton campaign & Obama Administration, there was never a special councel [sic] appointed!” Trump tweeted. “This is the single greatest witch hunt of a politician in American history!”

Rosenstein met with all U.S. senators in one of the most protected rooms on Capitol Hill, “the SCIF,” or a sensitive compartmented information facility. The below-ground facilities in the Capitol Visitors Center – one on the House side, one on the Senate side – are primarily used by national security committees to receive updates on classified or sensitive matters from top government officials, who regularly visit the Capitol to meet with lawmakers. One part of the Senate SCIF is large enough to hold all 100 senators, a senior aide said.

After the Senate briefing was announced Monday by a spokesman for Senate Majority Leader Mitch McConnell, R-Ky., Senate Minority Leader Charles Schumer, D-N.Y., said in a statement that he hoped senators on both sides of the aisle would “use this opportunity to seek the full truth” about Comey’s firing.

But why Rosenstein’s briefing needed to happen in a room designed for classified briefings is still unclear. McConnell aides wouldn’t say whether Rosenstein requested that the briefing be classified or whether he has told Senate leaders that he has classified information to share.

Rosenstein may have been asked about his decision to open an independent investigation, as well as the circumstances surrounding the memo he wrote about Comey.

In the memo, Rosenstein wrote that the FBI director had violated long-standing Justice Department practices in his handling of the bureau’s investigation of Clinton’s use of a private email server when she was secretary of state. Principal deputy White House press secretary Sarah Huckabee Sanders pointed to Rosenstein’s memo as the reason Trump fired Comey, saying that Comey had committed “atrocities” in overseeing the FBI’s investigation of Clinton.

By May 10, White House officials had backed off blaming Rosenstein for the firing and the next day, Trump contradicted his own officials and told NBC News that the decision to fire Comey was his alone and that he was thinking of “this Russia thing with Trump” when he made it.

Rosenstein may have blunted some of the criticism of his actions in the past week with his announcement Wednesday that he had appointed a special counsel. Both Democratic and Republican lawmakers praised Rosenstein’s appointment of Mueller to oversee the investigation of Russian meddling in last year’s presidential election and possibly whether the president or anyone at the White House has interfered with the inquiry.