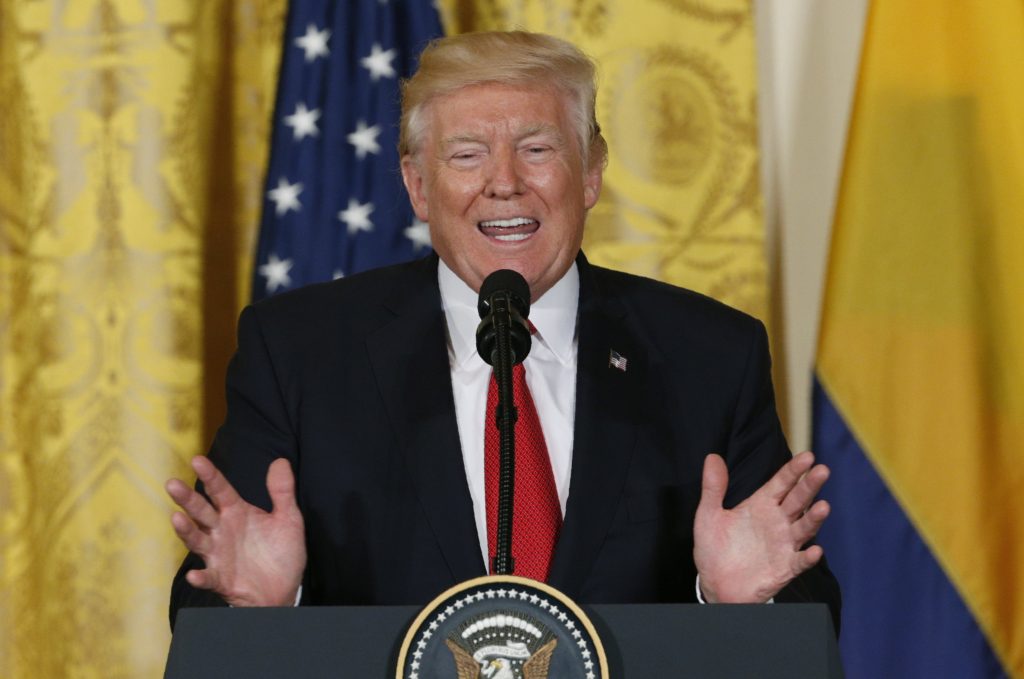 President Donald Trump on Thursday denied ever asking FBI Director James Comey to back off his agency’s investigation into possible collusion between the Trump campaign and Russia, and the role played by former national security adviser Michael Flynn.

Asked whether he urged Comey to ease up on the Flynn investigation, Mr. Trump said at a news conference, “No, no,” before ordering the media to move on to the “next question.”

Earlier this week there were several news reports that the president made the request regarding Flynn during a February meeting in the Oval Office – these accounts were based on a memo Comey drafted at the time, the contents of which were described by officials familiar with the memo. Mr. Trump fired Comey last week.

At the news conference, the president also reiterated his claim that the Justice Department’s decision to appoint a special counsel to look into possible collusion with Russia was “a witch hunt,” saying he had never colluded with the Russians.

“I respect the move, but the entire thing has been a witch hunt, and there is no collusion between – certainly myself and my campaign, but I can only speak for myself and the Russians. Zero,” Mr. Trump said, at a joint news conference Thursday afternoon with President Juan Manuel Santos of Colombia. “Believe me, there’s no collusion. Russia is fine, but whether it’s Russia or anybody else, my total priority, believe me, is the United States of America.”

Mr. Trump lashed out in the morning on Twitter at the news that the Justice Department appointed a special prosecutor, former FBI director Robert Mueller, to oversee the investigation, calling the move a politically motivated “witch hunt” by his Democratic rivals. The president’s anger contrasted with a more measured written statement released by the White House on Wednesday evening, when he declared that a thorough investigation would find “no collusion between my campaign and any foreign entity.”

The president’s frustration has been building since he abruptly fired Comey. Trump said he acted because Comey, who had been overseeing the Russia investigation, “wasn’t doing a good job” leading the agency, calling him a “showboat” and a “grandstander.”

But a report in the New York Times this week that Mr. Trump allegedly asked Comey to end the investigation undercut the president’s rationale and has led to accusations from some in Congress that he was attempting to obstruct justice. Another report, in The Washington Post, that Trump revealed highly classified information to Russian diplomats in a meeting in the Oval Office last week has amplified concerns about the president’s dealings with Moscow.

During a speech at the Coast Guard Academy commencement Wednesday, an aggrieved Mr. Trump aired his mounting frustrations, declaring that “no politician in history, and I say this with great surety, has been treated worse or more unfairly. You can’t let them get you down, can’t let the critics and the naysayers get in the way of your dreams.”

And earlier in the day, during a private lunch of tv anchors at the White House, Trump said he believes the decision to appoint a special counsel “hurts our country terribly” and called it “a pure excuse for the Democrats having lost an election.”

“It shows we’re a divided, mixed-up, not-unified country,” Mr. Trump told the group. “I think it shows division, and it shows that we’re not together as a country. And I think it’s a very, very negative thing.”

The president is scheduled to leave Washington on Friday on his first foreign trip, a nine-day sojourn with stops in Saudi Arabia, Israel, Italy and Belgium, as well as a visit to the Vatican to meet Pope Francis.