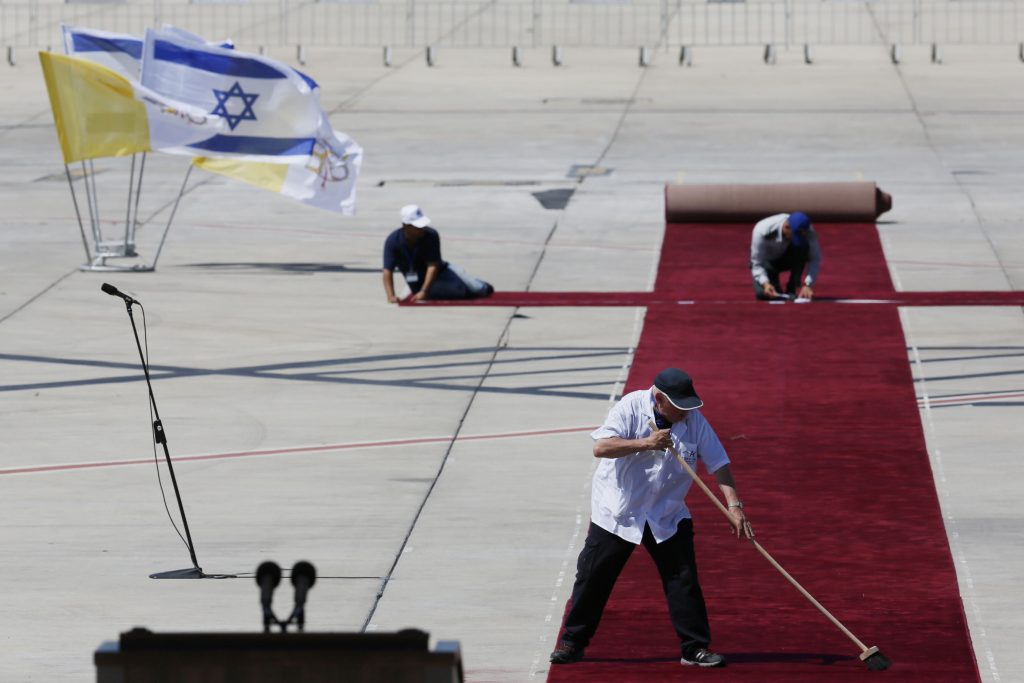 The red carpet to be rolled out for U.S. President Donald Trump on his arrival at Ben Gurion Airport will be 300 feet long.

That and various other facts and figures about the Israeli preparations for the historic visit were published by Arutz Sheva on Thursday.

Carpenters, electricians, security personnel and a host of others are finalizing the construction of platforms and light towers for the president’s arrival at Ben Gurion Airport. Hundreds of U.S. and Israeli flags and bouquets of flowers will adorn the venue, as well.

A secure complex designed specially to accommodate hundreds of VIPs, officials, and 300 journalists from Israel and abroad will be erected at the airport.

The Directorate of Military Intelligence (Aman) at the Defense Ministry has overall responsibility for ensuring that the visit goes smoothly, not a small task.

Dudu Chen, the head of Aman, said that “from the moment the mission is received, the Defense Ministry’s Operation’s Directorate works around the clock to ensure that the event will be held in an exemplary manner, both in preparation and in execution.”

“During visits by previous presidents, and during the Pope’s visit, the Defense Ministry was in charge of the complex operations and our professionals have accumulated considerable experience in VIP visits, and we will conduct the operation sensitively and professionally from the moment the presidential plane lands down to its departure from Israel.”

However, if the Israelis feel confident about their own preparations for the visit, there was a report this week that they did not view their American counterparts with the same confidence.

Israeli officials were said to be critical of the lack of organization on the other side, blaming it on “first visit symptoms,” the jitters and confusion typical of an inexperienced staff, according to a report on Ynet.

Previous administrations had presidential visits well in hand by this time, only a few days before arrival, on May 22, whereas the Trump team was still making signifcant changes in the itinerary.

The decision to cancel the speech at Masada, for example, was only made on Tuesday.

Most of all, the flap over the president’s visit to the Kosel and who would be there was an embarrassment to both sides.