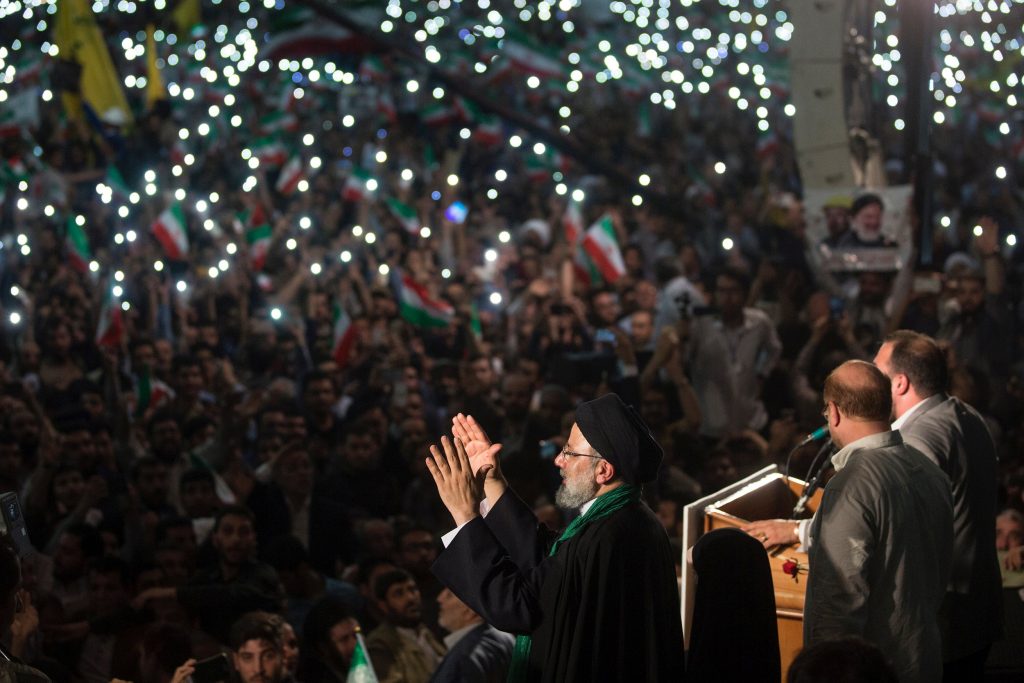 Iranians will vote on Friday for their next president. In the history of the Islamic republic, no incumbent has failed to win a second term. But this time, President Hassan Rouhani faces a tricky contest whose result may have major implications for the future of the country’s politics.

The race has essentially boiled down to a two-person battle between Rouhani and hard-line cleric Ebrahim Raisi. Although polls place Rouhani in the lead, a significant proportion of voters remain undecided. Rouhani’s bid has been hampered by widespread frustration among ordinary Iranians, who have yet to see the dividends of the country’s nuclear deal, inked with world powers in 2015, trickle down to them.

Rouhani “oversold the nuclear deal; he did not manage expectations well,” Nasser Hadian-Jazy, a political scientist at Tehran University, told the Christian Science Monitor. “He was so much concerned about selling it, he didn’t think about the future and delivery and managing of expectations.”

Raisi is counting on populist promises to lift him above Rouhani. There are also genuine concerns that the regime’s conservative establishment — anchored by the country’s supreme leader, Ayatollah Ali Khamenei, and the powerful Revolutionary Guard Corps — may tamper with ballots to rig the vote in favor of Raisi, who is believed to be their preferred choice. This would mirror what seemed to take place in 2009, when Mahmoud Ahmadinejad won reelection under murky circumstances, prompting protests that eventually led to two leading reformist candidates being placed under house arrest that continues to this day.

“Rouhani seems to be positioning himself as the anti-establishment candidate who dared to negotiate with the enemy,” wrote my colleague Carol Morello.

She noted that if Rouhani wins reelection, he “would be welcomed by Europeans who desire more business dealings with Tehran and who would likely resist or ignore any U.S. efforts to slap nuclear sanctions back on Iran. But if Raisi wins, both Iran and the United States would be led by presidents who considered the deal a bad one and are inclined to demonstrate military strength over the soft power of diplomacy. In that case, the orphaned deal could have a short lifespan.”

That’s something anti-Iran hawks in Washington would welcome.

“If Rouhani wins, it won’t change their perceptions of Iran,” said Karim Sadjadpour, an Iran analyst at the Carnegie Endowment for International Peace, speaking to Morello about the regime’s critics. “If Raisi wins, it makes their case easier to portray Iran as the malign actor in the region.”

That perspective was on full display in an op-ed written by Elliott Abrams, a national security official under former presidents George W. Bush and Ronald Reagan, in which he said he was “rooting” for Raisi.

“Raisi is the true face of the Islamic Republic, while Rouhani is a façade,” wrote Abrams. “Rouhani has shown himself powerless to affect any change in the regime’s conduct, and his only role is to mislead the West into thinking ‘moderates’ are in charge. We are far better off, as we were when Mahmoud Ahmadinejad was president, when there are no illusions about Iran’s regime and the men who lead it.”

He concluded: “If Raisi wins, two things will happen. First, it will be evident — especially to Iranians — that the election was stolen, so the Iranian people will be that much more alienated from their rulers. The day the regime falls will have been brought that much closer. And second, the entire world will have a much clearer view of the nature of that regime today.” (This, ironically, is quite similar to the view of staunch leftists who believed President Trump’s election victory would reveal the “empire” for what it is and lead to its implosion.)

Rouhani, who has ties to Khamenei, is not a real reformist. But, particularly during the election campaign, he has taken a striking line, attacking Raisi for his own role as a prosecutor in decades-old mass executions and berating the Revolutionary Guard for its anti-Israel sloganeering. He is appealing to a significant segment of the country’s population that is eager for political change in the country and rapprochement with the wider world. Human rights activists and leaders from ethnic minorities in Iran have come out in his support.

For that reason, perhaps, Rouhani has seemed at odds with elements of the regime in recent years. He and his allies, including the Western-educated foreign minister, Javad Zarif, can do little as authorities arrest and arbitrarily detain foreigners and brutalize dissidents. If he wins, the backlash from more conservative forces may be swift.

“Every time they lose, they arrest more people in Iran, crackdown even more on the press, and become even more hostile against the West,” wrote Meir Javedanfar, an expert on Iranian affairs, referring to Iran’s hard-liners. “Why? Because they know that these are the areas which the reformists and the moderates want to improve. Therefore, they will try to weaken them and make them look feeble in front of their voters by doing things which the winning camp has stood against.”

Outsiders may be justifiably cynical about Iranian democracy, but when Iranians vote in their greatest numbers, they do so for reformist politics.

“Reformist President Mohammad Khatami won in 1997 and 2001 with 79.9 percent and 66.8 percent voter turnout, respectively. Rouhani won four years ago with 72.9 percent turnout and 18.6 million votes. In contrast, no hardline presidential candidate has ever exceeded Ahmadinejad’s 17.2 million votes in 2005,” wrote Reza Marashi, research director at the National Iranian American Council. “If voter turnout is anywhere near 2013 levels, a Raisi victory would require an electoral feat that hardliners have never before accomplished.”

And if that happens, Iranians will once more have to confront how their political game is rigged.