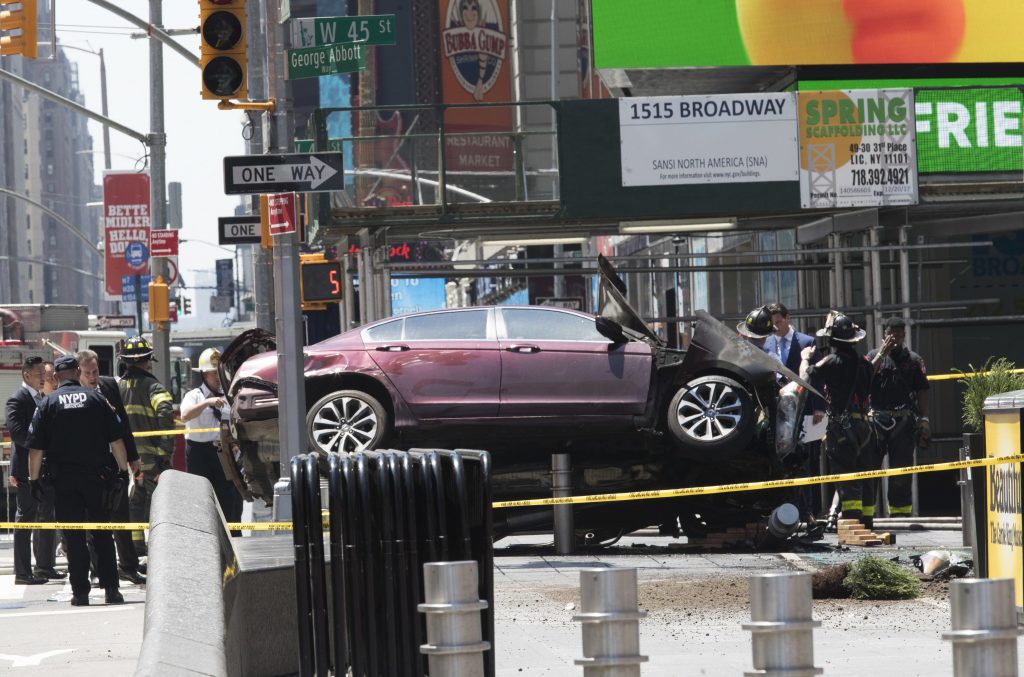 A man who appeared intoxicated drove his car the wrong way up a Times Square street Thursday and plowed into pedestrians on the sidewalk, hitting 23 people and killing one, according to authorities and witnesses. The driver was taken into custody.

Pandemonium erupted when the maroon 2009 Honda sedan barreled through three blocks of the prime tourist location, from 42nd Street to 45th Street, where it hit lamppost and steel barriers intended to block vehicles from getting onto the sidewalk. The car came to rest with its right-side wheels in the air.

“He’s just mowing down people,” said Asa Lowe, of Brooklyn, who was standing outside a store when he heard screaming. “He didn’t stop. He just kept going,” he said.

The crash happened just before noon on a hot, clear day that brought large crowds of people into the streets to enjoy the good weather. Video posted online showed steam or smoke pouring from the car for a few moments after it stopped moving.

After the car struck a barricade and stopped, the driver climbed out of his vehicle, Lowe said.

The driver, 26-year-old Richard Rojas, a Navy veteran, was taken into custody and was underwent tests for alcohol and illegal substances, Police Commissioner James O’Neill said. Later, ABC7 reported that unnamed law-enforcement sources said they believe Rojas had been using an illegal substance.

Rojas had been arrested at least twice previously for driving while intoxicated, once in 2008 and once in 2015, police said.

The deceased was an 18-year-old woman. Her 13-year-old sister was among the injured.

Police do not suspect a link to terrorism, but the vehicle was checked by the bomb squad and certain city landmarks were getting a beefed up police presence “out of an abundance of caution,” Mayor Bill de Blasio said.

Police said Rojas made a quick U-turn onto 42nd Street and then drove up the sidewalk for three blocks, passing tourist draws like the Hard Rock Cafe and the Bubba Gump Shrimp Company restaurant and mowing people down before slamming into a pole. He was combative with officers arresting him.

Bruno Carvalho, a student at SUNY Albany, said the car approached quickly and passed him on the sidewalk.

“People just got stunned,” he said. “I don’t think there was actually time for screaming.”

He said he saw about five people who looked gravely injured — “people, really bad, in front of us.”

Tourists Patrick and Kelly Graves of Sheboygan, Wisconsin, were waiting to get on a tour bus when they heard the crash. Kelly said she feared the worst, maybe a bomb, as “chaos” erupted and people began running.

People rushed to help the injured, who were lying on the sidewalk.

The White House said President Donald Trump has been “made aware” of the situation in Times Square and will continue to receive updates as the situation unfolds. Press secretary Sean Spicer tweeted that Trump was briefed before New York authorities confirmed the death.

The sidewalks in many parts of Times Square and surrounding blocks are lined with metal posts designed to prevent cars from getting onto the sidewalks and other public areas. That network of barricades, though, is far from a complete defense. There are many areas where vehicles could be driven onto packed sidewalks or public plazas. Times Square also has a heavy police presence at all hours of the day and night.

“We feel deeply for those injured and particularly for the family of the young woman who was lost,” the mayor said. “Our prayers are with all of them.”