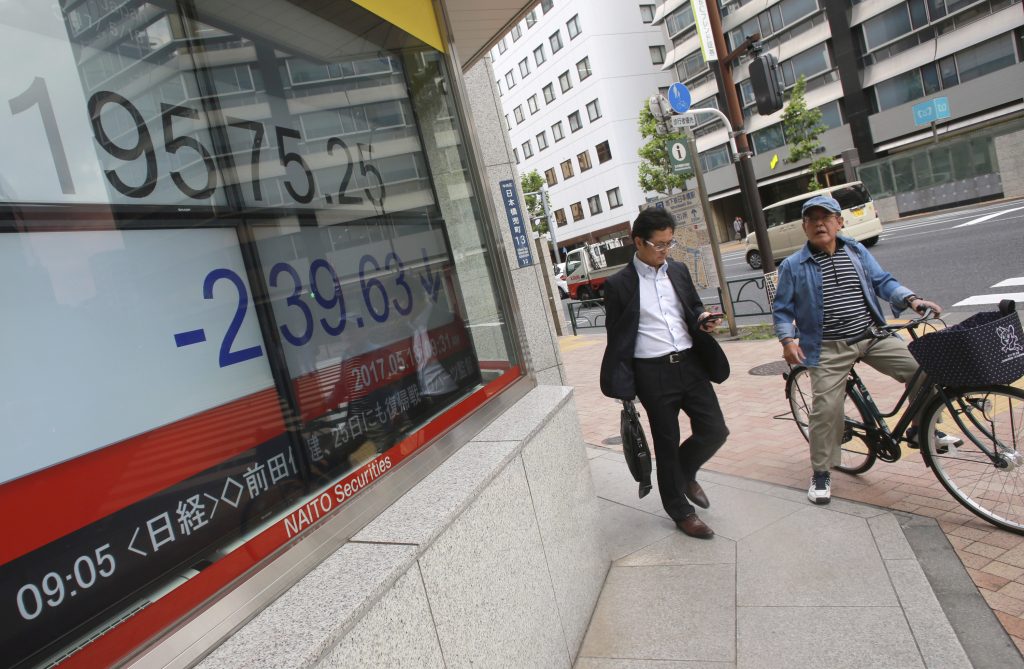 Equities in Asia took cues from Wall Street, where the Dow and S&P 500 both sank about 1.8 percent overnight following reports that President Trump tried to influence a federal probe.

The allegations have not only thrown doubt over the future of the pro-growth policies that President Trump promised, but they have raised the possibility he could end up leaving the presidency.

The region’s shares showed little reaction to news that former FBI chief Robert Mueller was appointed to investigate alleged Russian interference in the 2016 election, although the S&P mini futures were a shade higher while the dollar bounced modestly against the safe-haven yen.

“The appointment appears to be an attempt at tackling the problem early. While it is a bit of good news, further investigations are needed and it still remains to be seen what those could reveal. As such, the markets are still faced with uncertainty,” said Yoshinori Shigemi, global market strategist at JPMorgan Asset Management in Tokyo.

In other political developments, trouble mounted for Brazilian President Michel Temer, who was recorded discussing payments to silence testimony by a potential witness in the country’s biggest-ever graft probe.

An exchange-traded fund of Brazilian equities was down more about 8 percent in Tokyo, where it is traded.

In currencies, the euro extended its overnight surge to touch $1.1174, its highest since November, before pulling back slightly to $1.1142.

“There are two implications from the latest developments in Washington, first being the possibility of congressional procedures reaching an impasse and second is the potential of Trump being forced out,” said Masafumi Yamamoto, chief forex strategist at Mizuho Securities in Tokyo.

“But judging by how steeply the dollar has fallen, participants may have already priced in much of the negative news regarding Trump. The dollar could even benefit with the market thinking of post-Trump scenarios.”

The dollar index against a basket of major currencies was flat at 97.604, not far from a six-month trough of 99.333 reached the previous day.

The benchmark 10-year Treasury yield was at 2.239 percent after going as low as 2.209 percent overnight, its lowest since April 21.

With Treasury yields falling, the gap between U.S. and German government debt yields reached its narrowest in more than six months on Wednesday, as a tumultuous week in Washington contrasted with a sense of improved political stability in Europe.

In commodities, oil prices dipped after settling at a two-week high overnight. An ongoing effort by OPEC to cut production has partially propped up oil but prices remain under pressure from still plentiful supplies.

Gold hovered near a two-week high thanks to the weaker dollar and the risk aversion gripping the broader markets.