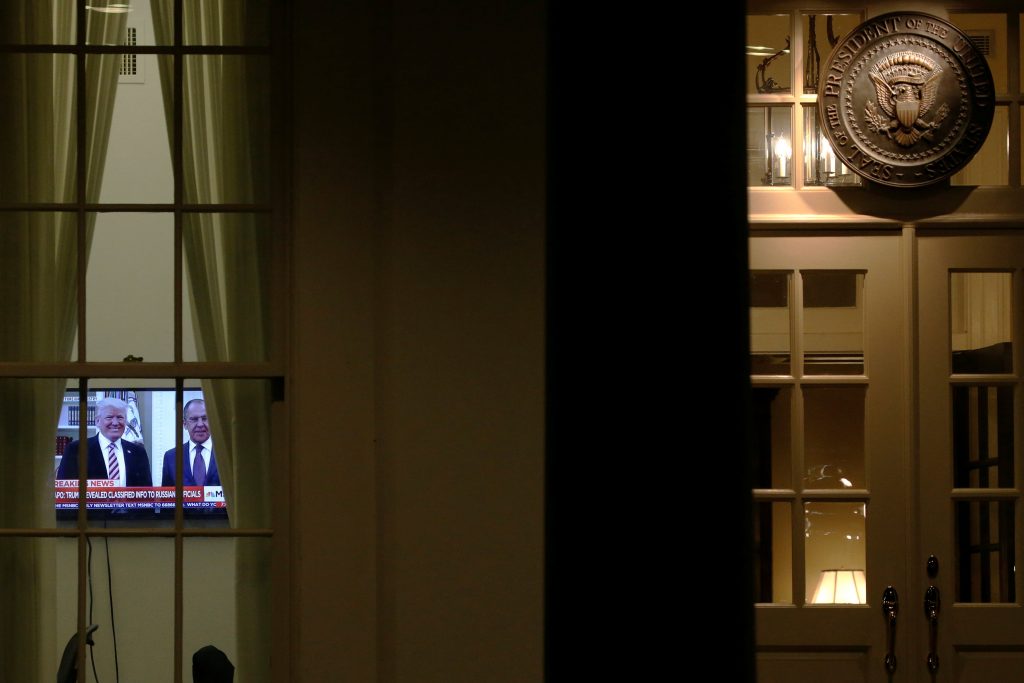 Some experts added, however, that the reports could undermine trust between partners.

In a meeting with Russian Foreign Minister Sergei Lavrov and Russian ambassador Sergei Kislyak, President Trump disclosed intelligence about a planned Islamic State operation, which was supplied by a U.S. ally, two officials with knowledge of the situation said.

The name of the ally or intelligence-sharing operation was not disclosed.

Two of Washington’s allies in the intelligence sharing network known as “Five Eyes” – which groups the United States, Britain, Canada, Australia and New Zealand – played down the impact on their relationship with Washington.

Australian Prime Minister Malcolm Turnbull told a radio station in Adelaide he would maintain “my normal circumspection and discretion” on classified matters, adding the alliance with the United States “is the bedrock of our national security.”

President Trump and Prime Minister Turnbull met last week aboard a decommissioned aircraft carrier in New York City after beginning their relations with a testy phone call in February.

“The media reports have been rejected by senior U.S. officials who were in the meeting,” he said in an email via his spokeswoman. “If there is ever to be a resolution of the dreadful situation in Syria, it will require concerted efforts from both the U.S. and Russia.”

A Japanese government official said it was simply not possible to stop cooperating with Washington on intelligence matters.

“If the report is true and Mr. Trump is an untrustworthy person, it doesn’t necessarily mean that we don’t share information with the U.S. anymore,” said the official, speaking on condition of anonymity.

While the president has the authority to disclose even the most highly classified information at will, in this case he did so without consulting the ally that provided it, which threatens to jeopardize a long-standing intelligence-sharing agreement, the two U.S. officials said.

James Curran, professor of foreign policy at the University of Sydney, said the intelligence relationships were too important and productive to be damaged by President Trump’s alleged disclosures to the Russians.

“No real practical impact, but I do think it will raise more eyebrows about this president’s style and his cavalier attitude to this type of thing, said Curran.

Over the long term, however, such behavior “can potentially have very serious consequences for America’s intelligence relationships across the world,” Curran said.

Rhys Ball, who formerly worked for New Zealand’s intelligence service and is now a Massey University security and defence analyst, said he thought it would be “business as usual” for the “Five Eyes” community.

“Clearly someone has gulped at what was discussed or exchanged. But this might be the new norm when it comes to the United states and its attitude and foreign policy approach to the likes of the Russians,” Ball said.

They include the investigations into his election campaign’s ties to Moscow, probes into Russian interference in the election, the president’s own expressions of disdain for the U.S. intelligence community and his claim that former President Barack Obama spied on him, citing a media report that Britain’s spy agency GCHQ was behind the surveillance.

“Five Eyes is far too significant for anyone to wash their hands of it and Five Eyes has weathered a few storms over the years,” Ball said.