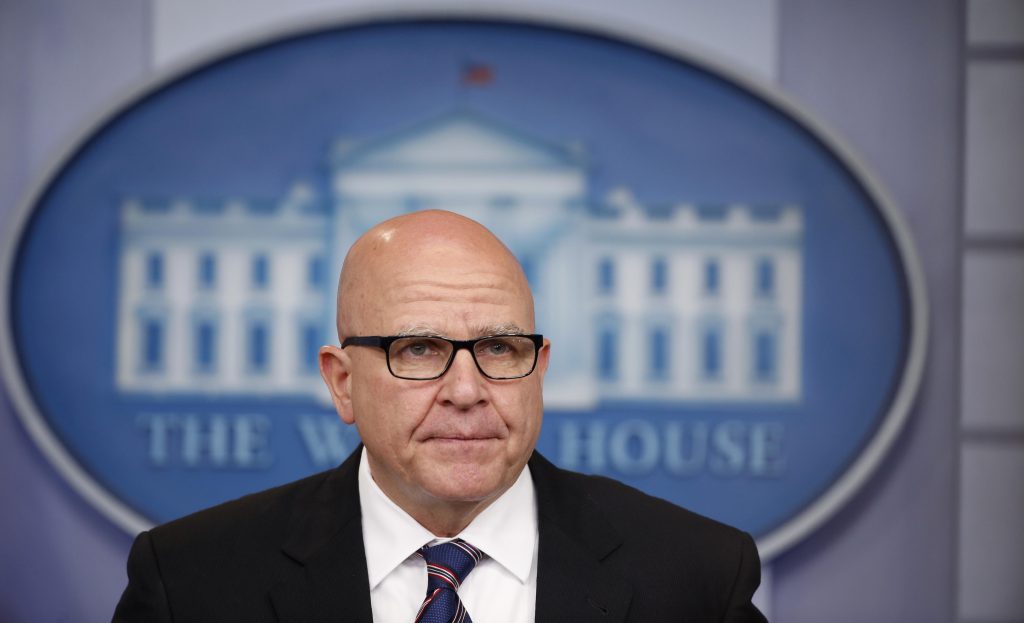 Pushing back against allegations of damaging intelligence disclosures, President Donald Trump’s national security adviser insisted Tuesday that Mr. Trump’s revelations to Russian officials about the terrorist threat from the Islamic State terror group were “wholly appropriate” and amounted to a routine sharing of information.

H.R. McMaster added that none of the U.S. officials present for the president’s Oval Office meeting with the Russian foreign minister last week “felt in any way that that conversation was inappropriate.” He used the words “wholly appropriate” nine separate times.

Mr. Trump himself claimed the authority to share “facts pertaining to terrorism” and airline safety with Russia, saying in a pair of tweets he has “an absolute right” as president to do so. Mr. Trump’s tweets did not say whether he revealed classified information about IS, as published reports have said, and as a U.S. official told The Associated Press.

McMaster, in a White House briefing, said: “In the context of that discussion, what the president discussed with the foreign minister was wholly appropriate to that conversation and is consistent with the routine sharing of information between the president and any leaders with whom he is engaged.”

He cast some of Mr. Trump’s revelations as information that was available from publicly available “open-source reporting” and added that the president did not know the precise source of the intelligence he had shared, suggesting that Mr. Trump could not have compromised confidential sources.

Still, the White House has not expressly denied that classified information was disclosed in the Oval Office meeting between Mr. Trump and Russian diplomats last week. The Kremlin dismissed the reports as “complete nonsense.”

The news reverberated around the world as countries started second-guessing their own intelligence-sharing agreements with the U.S.

A senior European intelligence official told the AP his country might stop sharing information with the United States if it confirms that Mr. Trump shared classified details with Russian officials. Such sharing “could be a risk for our sources,” the official said. The official spoke only on condition that neither he nor his country be identified, because he was not authorized to discuss the matter publicly.

On Capitol Hill, Democrats and Republicans alike expressed concern about the president’s disclosures. Sen. John McCain, R-Ariz., called the reports “deeply disturbing” and said they could affect the willingness of U.S. allies and partners to share intelligence with the U.S.

“I think we could do with a little less drama from the White House on a lot of things so that we can focus on our agenda,” he told Bloomberg Business.

Doug Andres, a spokesman for House Speaker Paul Ryan, said the speaker was looking for “a full explanation of the facts from the administration.”

Minority Leader Chuck Schumer, D-N.Y., called for Congress to have immediate access to a transcript of Mr. Trump’s meeting with the Russians, saying that if Mr. Trump refuses, Americans will doubt that their president is capable of safeguarding critical secrets.

Mr. Trump said in his tweets, “I wanted to share with Russia (at an openly scheduled W.H. meeting) which I have the absolute right to do, facts pertaining … to terrorism and airline flight safety. Humanitarian reasons, plus I want Russia to greatly step up their fight against ISIS & terrorism.”

Later Tuesday, Mr. Trump told reporters he’d had a “very, very successful meeting” with Lavrov. He promised that “we’re going to have a lot of great success over the next coming years” in the fight against IS “and we want to get as many to help fight terrorism as possible.”

A senior U.S. official told AP that Mr. Trump shared details about an Islamic State terror threat related to the use of laptop computers on aircraft with Russian Foreign Minister Sergey Lavrov and Russian ambassador to the U.S. Sergey Kislyak. The classified information had been shared with the president by an ally, violating the confidentiality of an intelligence-sharing agreement with that country, the official said.

Mr. Trump later was informed that he had broken protocol and White House officials placed calls to the National Security Agency and the CIA looking to minimize any damage.

The official, who spoke on condition of anonymity because the official was not authorized to speak publicly, would not say which country’s intelligence was divulged.

Asked why the NSA and CIA were put on notice if the revelations were not problematic, McMaster cast the notification as being provided “from an overabundance of caution.”

The disclosure put a source of intelligence on the Islamic State at risk, according to The Washington Post, which first reported the disclosure on Monday.

The CIA and the Office of the Director of National Intelligence have declined to comment. CIA Director Mike Pompeo was to brief members of the House intelligence committee later in the day.

The U.S. official said that Mr. Trump boasted about his access to classified intelligence in last week’s meeting with Lavrov and Kislyak. An excerpt from an official transcript of the meeting reveals that Mr. Trump told them, “I get great intel. I have people brief me on great intel every day,” he said.

On Monday, McMaster told reporters: “The president and the foreign minister reviewed a range of common threats to our two countries including threats to civil aviation. At no time, at no time were intelligence sources or methods discussed and the president did not disclose any military operations that were not already publicly known.”

The revelations could further damage Mr. Trump’s already fraught relationship with U.S. intelligence agencies. He’s openly questioned the competency of intelligence officials and challenged their high-confidence assessment that Russia meddled in last year’s presidential election to help him win. His criticism has been followed by a steady stream of leaks to the media that have been damaging to Mr. Trump and exposed an FBI investigation into his associates’ possible ties to Russia.

The disclosure also risks harming his credibility with U.S. partners around the world ahead of his first overseas trip. The White House was already reeling from its botched handling of Mr. Trump’s decision last week to fire James Comey, the FBI director who was overseeing the Russia investigation.

The Royal Court in Jordan said that King Abdullah II and Mr. Trump spoke by phone about anti-terror cooperation and other issues Tuesday, a conversation that was scheduled last week.

The revelation also prompted cries of hypocrisy. Mr. Trump spent the campaign arguing that his opponent, former Secretary of State Hillary Clinton, should be locked up for careless handling of classified information.

Secretary of State Rex Tillerson disputed the report. He said Mr. Trump discussed a range of subjects with the Russians, including “common efforts and threats regarding counter-terrorism.” The nature of specific threats was discussed, he said, but not sources, methods or military operations.