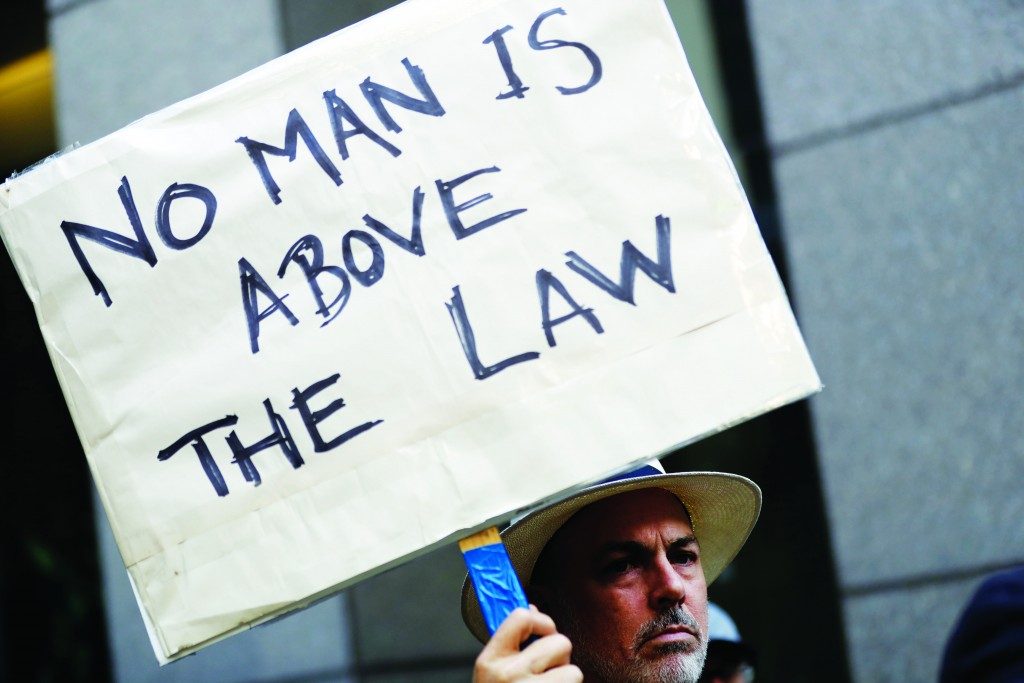 It was implausible that FBI Director James Comey was fired
in May 2017 for actions committed in July 2016 — the rationale contained in the memo by Deputy Attorney General Rod Rosenstein.

It was implausible that Comey was fired by Donald Trump for having been too tough on Hillary Clinton, as when, at that July news conference, he publicly recited her various email misdeeds despite recommending against prosecution.

It was implausible that Trump fired Comey for, among other things, reopening the Clinton investigation 11 days before the election, something that at the time Trump praised as a sign of Comey’s “guts” that had “brought back his reputation.”

It was implausible that Trump, a man notorious for being swayed by close and loyal personal advisers, fired Comey on the recommendation of a sub-Cabinet official whom Trump hardly knew and who’d been on the job all of two weeks.

It was implausible that Trump found Rosenstein’s arguments so urgently persuasive that he acted immediately — so precipitously, in fact, that Comey learned of his own firing from [monitors] that happened to be playing behind him.

These implausibilities were obvious within seconds of Comey’s firing and the administration’s immediate attempt to pin it all on the Rosenstein memo. That was pure spin. So why in reality did Trump fire Comey?

Over the last year, Comey has been repeatedly wrong. Not, in my view, out of malice or partisanship (although his self-righteousness about his own probity does occasionally grate). He was in an unprecedented situation with unpalatable choices. Never in American presidential history had a major party nominated a candidate under official FBI investigation. (Turns out the Trump campaign was under investigation as well.) Which makes the normal injunction that FBI directors not interfere in elections facile and impossible to follow. Any course of action — disclosure or silence, commission or omission — carried unavoidable electoral consequences.

Comey had to make up the rules as he went along. He did. That was not his downfall. His downfall was making up contradictory, illogical rules, such as the July 5 non-indictment indictment of Clinton.

A series of these — and Comey became anathema to both Democrats and Republicans. Clinton blamed her loss on two people. One of them was Comey.

And there’s the puzzle. There was ample bipartisan sentiment for letting Comey go. And there was ample time from Election Day on to do so. A simple talk, a gold watch, a friendly farewell, a Comey resignation to allow the new president to pick the new director. No fanfare, no rancor.

True, this became more difficult after March 20 when Comey revealed that the FBI was investigating the alleged Trump-Russia collusion. Difficult but not impossible. For example, just last week Comey had committed an egregious factual error about the Huma Abedin emails that the FBI had to abjectly walk back in a written memo to the Senate Judiciary Committee.

Here was an opportunity for a graceful exit: Comey regrets the mistake and notes that some of the difficult decisions he had previously made necessarily cost him the confidence of various parties. Time for a clean slate. Add the usual boilerplate about not wanting to be a distraction at such a crucial time. Awkward perhaps, but still dignified and amicable.

Instead we got this — a political ax murder, brutal even by Washington standards. (Or even Roman standards. Where was the vein-opening knife and the warm bath?) No final meeting, no letter of resignation, no presidential thanks, no cordial parting. Instead, a blindsided Comey ends up in a live-streamed O.J. Bronco ride, bolting from Los Angeles to be flown, defrocked, back to Washington.

Why? Trump had become increasingly agitated with the Russia-election investigation and Comey’s very public part in it. If Trump thought this would kill the inquiry and the story, or perhaps even just derail it somewhat, he’s made the blunder of the decade. Whacking Comey has brought more critical attention to the Russia story than anything imaginable. It won’t stop the FBI investigation. And the confirmation hearings for a successor will become a nationally [viewed] forum for collusion allegations, which up till now have remained a scandal in search of a crime.

So why did he do it? Now we know: The king asked whether no one would rid him of this troublesome priest, and got so impatient he did it himself.