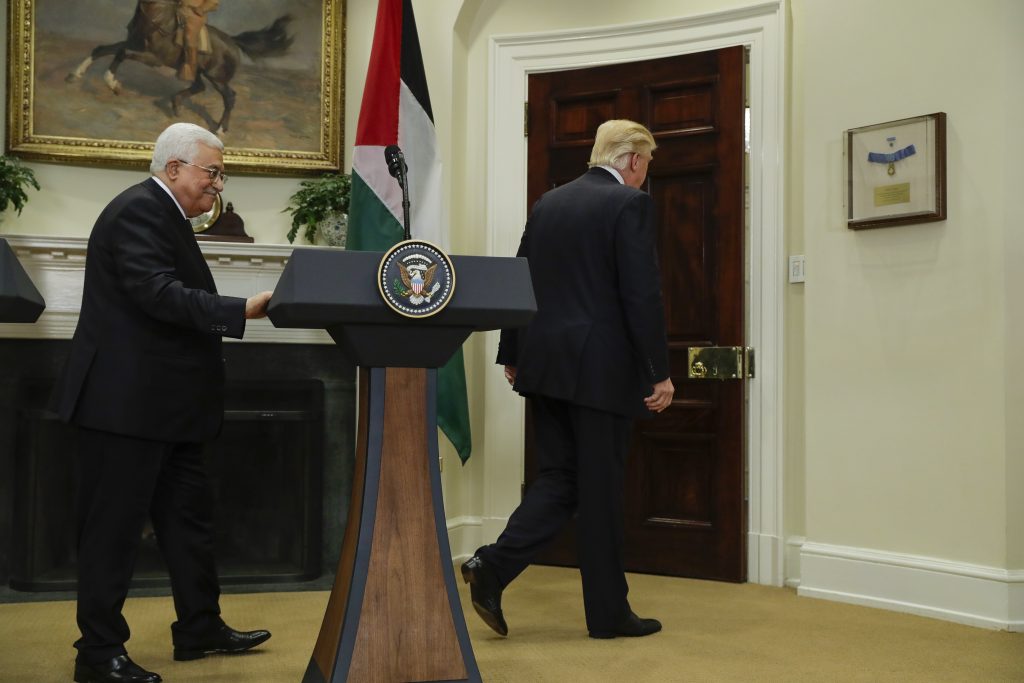 The Palestinian government is “hopeful” that the Trump administration will make real progress on peace between Israel and the Palestinians, even though there’s no actual plan for achieving that peace, said the Palestinian Liberation Organization’s new representative in Washington. In fact, he said, Mr. Trump’s lack of a real plan might help.

“We have had so many plans, and it didn’t work. So perhaps if we start without a plan, it might work,” said Husam Zomlot, at an event Monday hosted by the Arab Center.

Zomlot was previewing President Donald Trump’s trip to the region later this week, which will include a visit to Israel May 22 and a meeting with Palestinian President Mahmoud Abbas in Beis Lechem on May 23. He said Mr. Trump’s blank slate on how to move forward was preferable because all the various plans and frameworks proposed in previous iterations of the peace process were obstacles to progress.

“They were a major reason why we failed, because they had a habit of framing the agenda that was exactly in the opposite agenda of peace, an agenda that wanted to create and build and sustain a process that was designed to prevent the outcome,” said Zomlot. “So I’m even happier that we don’t have a plan.”

Standing beside Israeli Prime Minister Benjamin Netanyahu in Washington in February, Mr. Trump said he had no real preference between a one-state or two-state solution for the Israeli-Palestinian conflict.

“I’m very happy with the one that both parties like,” Mr. Trump said “I can live with either one.”

The Palestinians are insisting on the two-state option, Zomlot said. He expressed support for the idea that Mr. Trump might endorse the idea of Palestinian “self-determination,” as national security advisor H.R. McMaster said Friday, although the Palestinian government has no real confirmation of what Mr. Trump will say on the matter when he gets to the region.

There are several signs that Mr. Trump is serious about finding a way forward, Zomlot said, including that he is holding back from such campaign promises as moving the U.S. Embassy from Tel Aviv to Jerusalem.

“I believe that they are open, and I believe they are attentive,” he said. But “there is no approach, there is no mechanism, there’s nothing. We did not discuss or agree on the way forward.”

Zomlot praised Jason Greenblatt, the White House special envoy to the region, who visited Yehudah and Shomron in March and met Pres. Abbas and other Palestinian leaders, describing the interactions as “positive” and “far-reaching. Zomlot also described as “crucial” the visit of CIA Director Mike Pompeo in February.

The Palestinian position heading into the visit is to insist on a Palestinian state that enjoys “full sovereignty,” a capital in East Jerusalem and an arrangement for millions of Palestinian refugees that may not provide for them all to return to their homes but at least acknowledges their status and some of their rights.

There’s little chance the Palestinian side will give Mr. Trump any significant concessions on the issues the administration has focused on — Palestinian incitement and the PLO’s policy of paying subsidies to the families of those who have attacked Israeli and American civilians. Success going forward will depend on Washington’s ability to play the role of the mediator and place itself exactly in the middle of the two sides, said Zomlot.

But Messrs. Trump and Abbas have established “good chemistry” and were able to establish a relationship of trust during their meeting at the White House earlier this month, he said.After the meeting, Mr. Abbas went off script and delivered impromptu remarks in English, said Zomlot.

“Now, Mr. President, with you we have hope,” said Mr. Abbas.