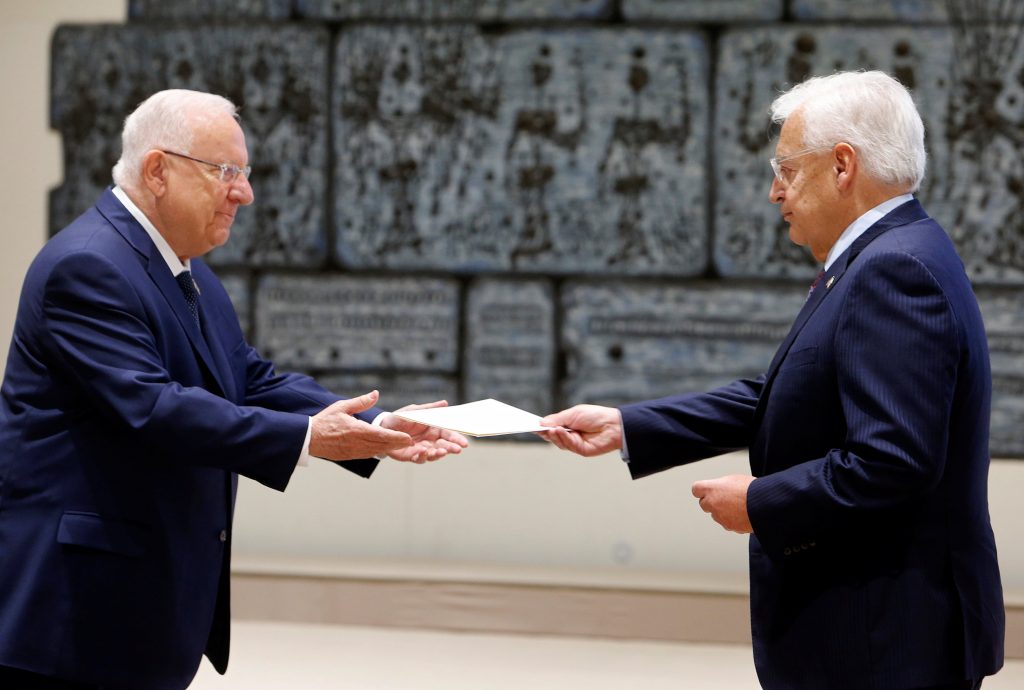 U.S. Ambassador to Israel David Friedman presented his diplomatic credentials to President Reuven Rivlin on Tuesday during an official ceremony, pledging to do all within his power to take the Israel-U.S. relationship to “new heights.”

During their meeting, President Rivlin called on the United States to recognize Yerushalayim as Israel’s official capital a day after American officials preparing for President Trump’s visit told their Israeli counterparts “the Western Wall is not in your territory — it is in the West Bank.”

In response, the Prime Minister’s Office said Monday it believed the comments do not represent the president’s position, an assertion which was confirmed by a senior Trump administration officials hours later.

Rivlin added that Israel is excitedly awaiting the president’s visit, which he said is a symbol of the unbreakable bonds between the two countries.

“We look forward to working with the new administration to find new ways and to think of new ideas, of how to move forward and build trust between Israelis and Palestinians,” added Rivlin.

Prime Minister Netanyahu said to Friedman that “it’s a pleasure to see you and to welcome you to Jerusalem, our eternal capital. I know you went to the Kotel. It’s deeply appreciated by all our people.”

Ambassador Friedman replied that “there was no other place to go.”

Mr. Netanyahu noted that to visit the Kosel “was a strong gesture of solidarity.

“We look forward to receiving President Trump and we want to work with you and with the president these coming years to strengthen our great alliance.”