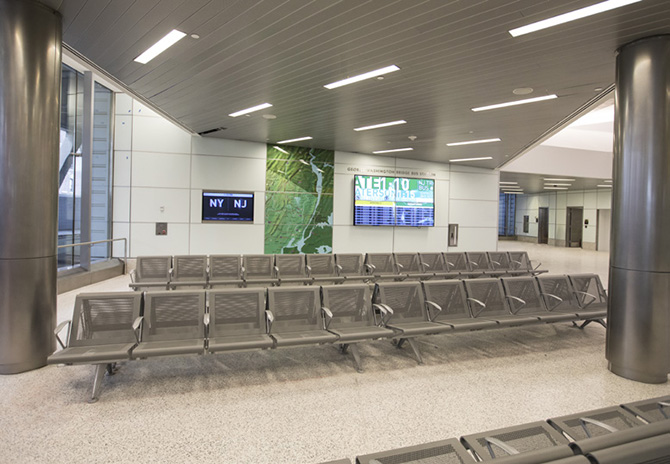 According to the Port Authority of New York and New Jersey, the station has a waiting area with air-conditioning and heating, seating for up to 125 people and gates that comply with the Americans With Disabilities Act by removing barriers for passengers with disabilities to get on and off their buses conveniently. Passengers who need assistance will no longer have to arrange with their carrier for separate pick-up and drop-off on Fort Washington Avenue.

The new station allows for convenient use by passengers with disabilities. According to the Port Authority of New York and New Jersey, all levels of the station are connected by escalators and elevators, and a new ramp allows access to the elevator at the Fort Washington Avenue level.  Passengers who require assistance no longer need to make arrangements with their carrier for separate pick-up and drop-off on Fort Washington Avenue.

All bus service is now at the Bus Pavilion on Level 3 of the terminal. Customers can enter the terminal at Fort Washington Avenue and take the escalator,  stairs or elevator up to the bus pavilion. There are also express elevators at the Broadway entrance.

The project was nearly two years behind schedule and $17 million over budget.

The tunnel between the bus terminal and the New York City Metropolitan Transportation Authority’s A Line station at 175th Street will reopen at a later date.

More information on the new terminal is available a: