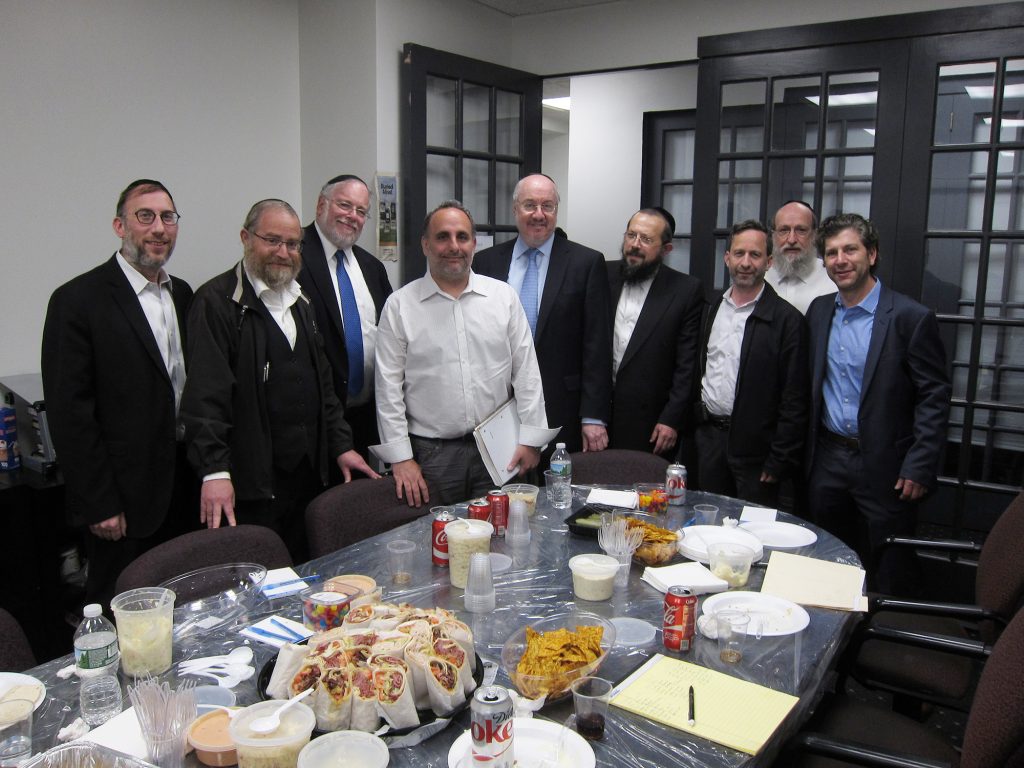 A freeze on all construction in Fallsburg announced last year hit the myriad camps and bungalow colonies who call the Sullivan County town home for the summer like a ton of bricks.

No adding annexes to buildings, no dividing rooms into two, not even constructing new steps or gates. Moratorium means moratorium: a total freeze, enforced by the town’s building inspector.

With the yearlong suspension coming to an end in June, Fallsburg’s town supervisor, Steven Vegliante, came into Boro Park last week Wednesday for a meeting with representatives of the Orthodox summer lifestyle.

More than a dozen bungalow colony reps from Loch Sheldrake, Mountain Dale, Woodridge, Woodbourne and South Fallsburg met with Vegliante, who doubles as police commissioner and who is an attorney for real estate developers in his private life.

Convening at a financial company’s 16th Ave. conference room, Vegliante immediately brought up the moratorium, which “let’s not kid ourselves, is the elephant in the room.”

Platters of roast chicken, corned beef sandwiches, cole slaw and popcorn lay mostly ignored on the table as the meeting quickly evolved into heated complaints about the inspectors’ strong-arm tactics.

One person pulled out a stack of forms, saying that he had “10,000 signatures, plus paid staff” to canvass voters ahead of the upcoming local elections.

“You’re our friend,” the person addressed Vegliante. “But you have to help us.”

Vegliante, who is up for reelection for a fifth term this November, tried to calm tempers, saying he could not accept criticisms without the other side present. But several people piled on their stories — how the inspectors turned back a bus of six families who came from New Square on Erev Shabbos since they were defined as a “new camp,” how a development had to redo their gates since they had square tops instead of round ones.

“Whenever they come down and have a list of things which need repair, we fix it, and then they have a new list,” one colony rep said. “This is inhumane, what they’re doing to us.”

Appearing off-guard at the level of animosity, Vegliante countered with his own stories, of live wires found in a children’s area during a preannounced inspection, a condemned building he found full of children playing. But he promised to hire an additional building inspector to speed things up.

“We’re all shareholders in this corporation,” he told the assembled, adding that he wanted to work with them to improve communication. “The liaison you’re looking for is sitting right here. The buck stops here,” he said, pointing to his heart.

One issue which cropped up was brought up by Leon Goldenberg, a Flatbush activist, who asked about police stopping cars at Four Corners on Friday afternoons, which sometimes leads to a “backup of a half mile.”

Vegliante said that cops are specifically instructed to keep the traffic flowing. He said that one option he is looking at to solve the problem of parking in Woodbourne is to purchase land for hundreds of parking spots.

“I’m working on it,” he said, adding sarcastically that “but here’s big bad Steve trying to take away parking from the Orthodox community.”

The problem facing Fallsburg — and the reason for the building moratorium, Vegliante told Hamodia in an interview prior to the meeting — is one of simple mathematics: how to square a round hole.

A town incorporated back in 1826 took 190 years to reach a population of about 7,500. Then, as it became a favored summer getaway for the Orthodox community, the sleepy village began swelling to an astronomic 200,000 residents every summer. It currently has 13,000 year-round residents, including about 6,000 from the Orthodox community.

It’s like preparing for a simchah for 200 guests and 4,000 people show up. The town prepares as much as it can, Vegliante said, including with things that nearby townships don’t, such as a water and sewer inspector and a building inspector.

“We were coming up to our limit on one of our sewer plants, water is always an issue as things go online,” Vegliante said. “We felt it was important to take a break, look at our zoning, really get the opinions of our residents and develop a zoning code that would serve us going forward for our entire community.”

More than a third of the town’s $18 million annual budget comes from revenue generated by Orthodox residents who own summer homes. Most, if not all, of the camps in the area are exempt from property taxes as religious entities.

Vegliante sharply disputed a characterization of the construction freeze as anything but a tactical break.

“Fallsburg is a very spiritual place, and I don’t know exactly the reason,” said Vegliante, citing the Yeshivah Gedolah of South Fallsburg, as well as two meditation centers which were opened decades ago.

He acknowledged that the moratorium was “a dramatic thing to do — I recognize that. It was not done irrationally, we thought long and hard before doing it.” But “we just want to be heard,” he said.

“We can handle growth. But when you’re talking about growth that’s almost 40 percent of the current amount of houses — that’s a rate of growth that I don’t think any municipality can ever be prepared for at one time.”

“We’d love for people to move up here year-round,” he joked, “but we recognize that a good portion of our residents can’t afford to do that. But they do want to come up and leave the city, leave the honking cars and the heat, and they want to see trees and they want to enjoy our parks and they want to walk. They want the country. What we’re trying to do is make sure that we can accommodate growth. And we want to make sure that we build that in a smart way so that as it gets built, it’s still the experience that people who grew up in Fallsburg enjoy.”