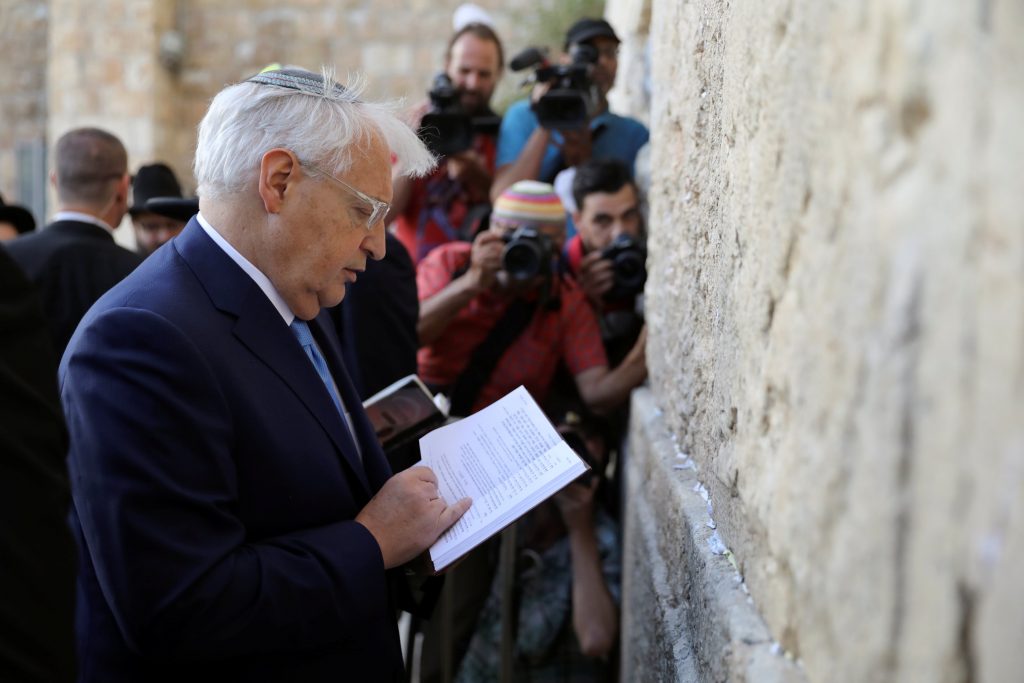 A White House spokesperson told Hamodia on Monday that highly controversial comments made by an American government official that generated unexpected friction on Monday between U.S. and Israeli officials, were not authorized and do not reflect President Trump’s views.

News reports of a heated exchange between an unidentified U.S. official overshadowed plans for an unprecedented visit to the Kosel by U.S. President Donald Trump.

When the American delegation, which had arrived at the Kosel to prepare for Mr. Trump’s visit, was queried as to whether Prime Minister Binyamin Netanyahu could accompany Mr. Trump to the Kosel, the suggestion was rudely rejected. The Israelis were informed by someone described variously as a member of the U.S. consulate or a senior U.S. official that it would be “a private visit” by the president and that he would make the visit on his own.

When the Israelis then asked whether live media coverage of the Kosel visit could be arranged, they were pointedly told, “What are you talking about? It’s none of your business. It’s not even part of your responsibility. It’s not your territory. It’s part of the West Bank.”

The Prime Minister’s Office confirmed the report, and said they were “shocked” by the comments and have asked the Trump administration to clarify the incident.

Mr. Netanyahu reportedly said he is certain that the comment does not reflect President Trump’s views.

In response to an inquiry by Hamodia, a White House spokesperson said that “These comments were not authorized by the White House. They do not reflect the U.S. position, and certainly not the President’s position.”

Ironically, the unpleasant exchange made the news shortly after the new ambassador to Israel, David Friedman, arrived in the country to formally assume his post.

Friedman, an Orthodox Jew, went directly to the Kosel, where he said he davened for the president and for the success of next week’s visit.

“We’re a bit tired, but we wanted to come straight to the holiest place in the entire Jewish world, the ‘Kotel Hama’aravi,’ so we came straight here,” Friedman said in a filmed statement provided by the U.S. Embassy.

Friedman is scheduled to hand his formal diplomatic credentials to President Reuven Rivlin on Tuesday morning.

The Americans suggested as an alternative that Pres. Rivlin could accompany Pres. Trump to Yad Vashem, thereby fulfilling both obligations.

All during the conversations, the U.S. officials emphasized that the Trump visit was not a formal state visit, but only a “working visit,” thereby exempting him from at least some of the protocols.

Agreement on plans for a visit to Masada have yet to be reached. While the Israelis want Mr. Netanyahu to speak there before or after Mr. Trump, the Americans have so far insisted that only Mr. Trump will speak.

That has been designated as the final oration of the trip. “He will make his final statement of the trip, ‘Masada will not fall again,’” they said. And from there the president is scheduled to fly by helicopter directly to Ben Gurion Airport, and from there to the next stop on his journey, the Vatican.