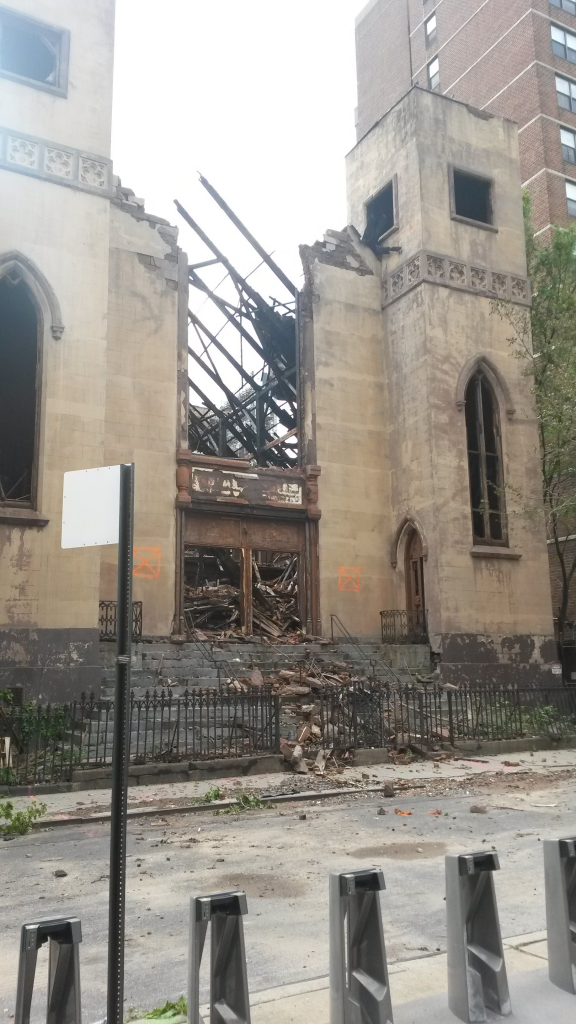 A massive fire has destroyed the structure of one of New York’s historically rich shuls, Beis Medrash Hagadol, located on Manhattan’s Lower East Side. There were no injuries and no sifrei Torah or other sefarim are thought to have been damaged, as the premises have been locked since it ceased operation in 2007.

It took nearly three hours early Sunday evening to extinguish the 3-alarm fire that engulfed the entire building and caused its roof to collapse. The cause remains unknown, according to FDNY officials.

The shul, which in its heyday had over 1,000 members, was the rabbinic seat of Harav Yaakov Joseph, zt”l, known as the “Rav Hakollel,” and more recently was led by Harav Ephraim Oshry, zt”l.

“It’s very sad,” Rabbi Mendel Greenbaum, who serves as the congregation’s Rabbi, told Hamodia. “I came in the middle and flames were already all over the building … we hope this is not the end of the shul’s history, but it certainly makes a hard situation much more difficult.”

Rabbi Greenbaum took over the shul following the petirah of his father-in-law, Rav Oshry, in 2003. He said that even after minyanim were no longer tenable, shiurim continued for some time and there has been hope that some arrangement could be made to preserve the dwindling congregation in some form.

As of Monday, authorities had not concluded whether the building’s walls would have to be knocked down for safety purposes or if renovations would be possible.

Even though the shul has not been active for some time, the damage caused by the fire leaves a gaping hole in the geography of what was once the city’s largest Jewish community. The imposing structure is located at 60 Norfolk Street in the heart of the core of the small but vibrant group of Jews that have remained in the neighborhood.

The building was erected in 1850 as a church, but was purchased in 1885 by a group of Russian Jews, who converted the site to house their growing congregation. In 1888, Rav Yaakov Joseph, a talmid of Yeshivas Volozhin and of Harav Yisrael Salanter, zt”l, founder of the Mussar Movement, assumed leadership of the shul and was crowned as New York City’s only Chief Rabbi. His drashos drew thousands of listeners, though several ill-intentioned individuals and a general anti-religious climate largely undermined his efforts to raise the community’s standards of observance.

Rav Oshry assumed leadership of Beis Medrash Hagadol in 1952, when the congregation was aging but still very vibrant. He is widely known for his sefer, Mi’Maakim, a collection of responsa written while he was in the Kovno ghetto. Due to the heartbreaking nature of the questions dealt with therein, the work is looked at as one of the scholarly monuments to the “spiritual heroism” of observant Jews during the Holocaust.

In 1967, Rav Oshry saved the site from demolition by procuring official Landmark status. The building’s history and unique Gothic Revival-style has led it to be held in high value by the New York’s architectural preservationists. In 2001, another fire destroyed the building’s roof and ceiling, but was repaired with funds from a grant.