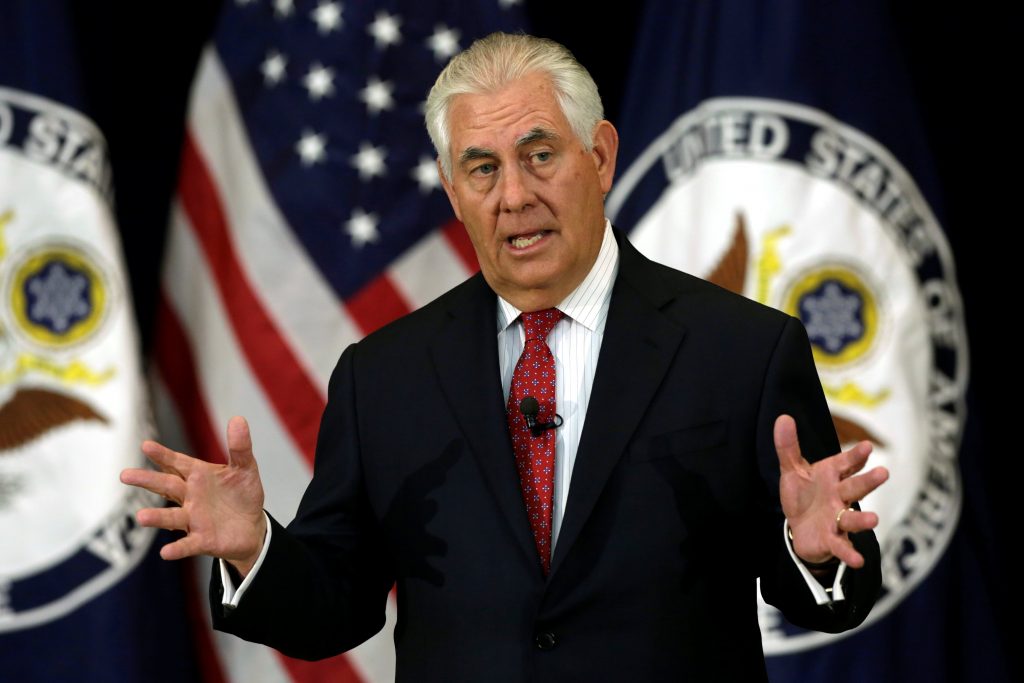 President Donald Trump is assessing whether moving the U.S. Embassy in Israel to Yerushalayim would help or hurt prospects for clinching an Israeli-Palestinian peace deal, Secretary of State Rex Tillerson said, revealing President Trump’s criteria for a decision that could reverberate throughout the volatile Middle East.

Since taking office, Mr. Trump has backed away from his campaign pledge to move the embassy in a gesture to Israel, instead saying he’s still studying the issue. But Tillerson linked President Trump’s deliberations directly to his aspirations for brokering Mideast peace.

“The president is being very careful to understand how such a decision would impact the peace process,” Tillerson said in an interview broadcast Sunday on NBC. He said President Trump’s decision would be informed by feedback from all sides, including “whether Israel views it as helpful to a peace initiative or perhaps a distraction.”

President Trump’s decision is being closely watched as the president prepares to depart Friday on his first foreign trip. After stopping in Saudi Arabia, President Trump will visit both Israel and the PA territories, in a nod to his nascent bid to strike the Israeli-Palestinian deal that has eluded his predecessors.

Yerushalayim’s status is one of the most emotionally charged issues in the conflict, with both sides laying claims. Israel liberated the eastern part of the city — claimed by Palestinians for the capital of a future independent state — from Jordan in 1967 and annexed it, a move not internationally recognized.

U.S. presidents of both parties have repeatedly waived a U.S. law requiring the embassy be moved to Yerushalayim. The most recent waiver — signed by former President Barack Obama — expires on June 1. President Trump is expected to sign a six-month renewal of the waiver before it expires, as he continues deliberating.

In another sign the White House is proceeding cautiously, Mr. Trump’s ambassador to Israel, David Friedman, plans to work out of the current embassy in Tel Aviv rather than out of the U.S. Consulate in Yerushalayim, as some had urged him to do. Friedman, who owns an apartment in Yerushalayim, is expected to live in the U.S. ambassador’s official residence in Herziliya.

Palestinians argue moving the embassy would prejudge one of the most sensitive issues in the conflict, undermining America’s status as an effective mediator. There have been some signs that the Israeli government, while publicly supportive of moving the embassy, has quietly raised concerns that doing so could enflame the political and security situation.

In the interview, Tillerson downplayed suggestions that the U.S. needed to deal decisively with Russia’s interference in the U.S. election before it could pursue better relations with Moscow. Though Tillerson said he’d seen the intelligence implicating Russia and believed there was no question Russia meddled, he said it was just one of a “broad range of important issues that have to be addressed in the U.S.-Russia relationship.”

He said the notion of a “reset” with Russia — which both President Obama and President George W. Bush pursued — was misguided.

“You cannot erase the past. You cannot start with a clean state,” Tillerson said “We’re starting with the slate we have, and all the problems we have are in that slate.”