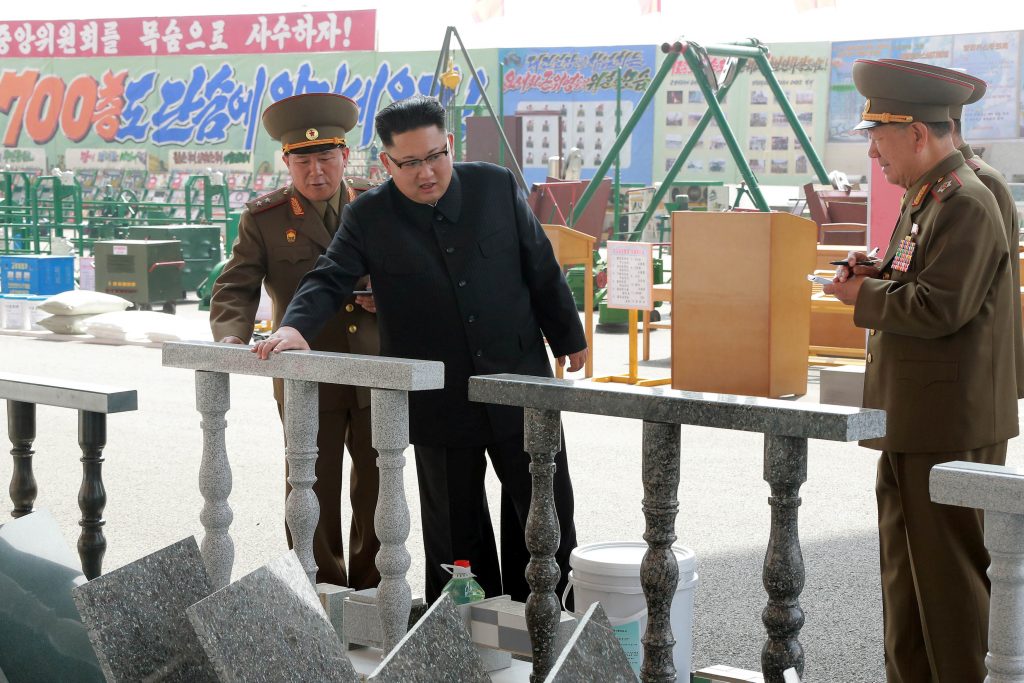 North Korea fired a ballistic missile early Sunday, sending it from a launch site near its border with China some 450 miles into the sea between the Korean Peninsula and Japan.

It was launched from the same site where North Korea fired two mystery missiles that some analysts thought could have been intercontinental ballistic missiles capable of reaching the mainland United States.

But the U.S. military said that the flight pattern was “not consistent” with an ICBM and did not threaten the United States.

Regardless, the apparent success of the launch and the steady pace of firings will only heighten tensions in the region.

Sunday’s launch is the first since Moon Jae-in, a liberal who is promoting engagement with North Korea, took office as South Korea’s new president Wednesday. Moon immediately convened an emergency meeting of his national security council to discuss the launch.

It also comes after repeated warnings from President Donald Trump to North Korea to stop – and China to crack down on its errant neighbor. Trump will likely urge Beijing to use its leverage over Pyongyang to punish it for this latest provocation.

In a statement late Saturday, the White House said, “North Korea has been a flagrant menace for far too long…Let this latest provocation serve as a call for all nations to implement far stronger sanctions against North Korea.”

The statement also noted the missile’s proximity to Russia: “With the missile impacting so close to Russian soil – in fact, closer to Russia than to Japan – the President cannot imagine that Russia is pleased.”

U.S. Pacific Command, based in Hawaii, said it had detected and assessed the missile, and “the flight was not consistent with an intercontinental ballistic missile.” However, it did not state what kind of missile it appeared to be.

“The North American Aerospace Defense Command determined the missile launch from North Korea did not pose a threat to North America,” Pacific Command spokesman Rob Shuford said in a statement.

South Korea’s Joint Chiefs of Staff said that the missile was fired shortly after 5 a.m. North Korea time, from Kusong, an area not far from the border with China.

In Tokyo, the Japanese government said that the missile flew for 30 minutes. It strongly condemned the “absolutely unacceptable” behavior.

“These repeated missile launches by North Korea are a grave threat to our country and are in clear violation of U.N. Security Council resolutions,” Japanese Prime Minister Shinzo Abe told reporters.

North Korea has been testing missiles at a rapid rate over the past year, apparently working toward leader Kim Jong Un’s ambition to develop an ICBM that can reach the United States.

The two most recent launches last month were deemed to have failed, as they exploded within seconds. However, Sunday’s missile appears to have been successful.

The site of the latest launches is raising suspicions.

North Korea launched two missiles in October last year from an air base in Kusong on North Korea’s west coast, on the other side of the country from the usual intermediate-range Musudan test site near Wonsan, on the east coast.

U.S. Strategic Command said they were “presumed” to be Musudans, which are technically capable of flying as far as 2,400 miles, putting Guam within range and almost reaching Alaska.

But Jeffrey Lewis, director of the East Asia nonproliferation program at the Middlebury Institute of International Studies at Monterey in California, said at the time that there was an “even chance” that they were intercontinental ballistic missiles (ICBMs).

At a huge military parade that Kim presided over last month, North Korea displayed two of its newest model missiles, including the submarine-launched ballistic type it successfully fired last year and the land-based version it launched last month.

One of the missiles looked similar to the KN-08 intercontinental ballistic missile that North Korea had included in previous parades. This missile has a theoretical range of about 7,500 miles, which is enough to reach all of the United States from North Korea.

It also put two ICBM canisters, which protect solid-fueled missiles from the effects of the environment, on the trucks that had carried the ICBMs previously. One may have been a KN-14, another missile capable of reaching the U.S. mainland, although it has a slightly shorter range.

Although there are still plenty of technical hurdles to be overcome, many analysts believe North Korea will eventually achieve Kim’s stated goal of developing an ICBM that can reach the mainland United States.