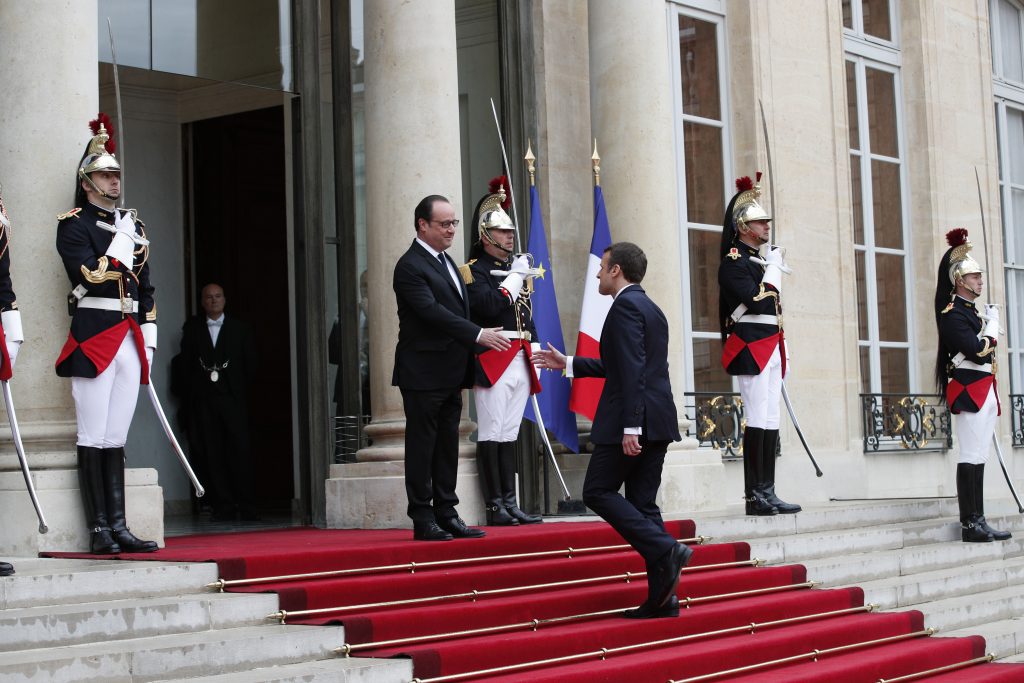 France’s Emmanuel Macron arrived Sunday for his inauguration ceremony at the Elysee presidential palace in Paris, ready to fully embark on his mission to shake up the world of French politics.

His predecessor, Francois Hollande, welcomed him in the courtyard, shaking hands in front of hundreds of journalists. The two were meeting in the president’s office before Hollande’s departure, taking a last few minutes to discuss the most sensitive issues facing France, including the country’s nuclear codes.

Macron takes charge of a nation that, when Britain leaves the European Union in 2019, will become the EU’s only member with nuclear weapons and a permanent seat on the U.N. Security Council.

Macron will then make a speech in the Elysee reception hall in front of about 300 guests, officials and family members.

Outside the Elysee, a few dozen supporters waved French tricolor and European blue flags at the arrival of the new president.

Following the ceremony and military honors at the Elysee palace, Macron will go to the Tomb of the Unknown Soldier, at the Arc de Triomphe at the top of the Champs-Elysees Avenue, a tradition followed by all heads of states in France’s modern history.

His first visit abroad will be to Germany on Monday, to visit with German Chancellor Angela Merkel in Berlin.

He will have to name his prime minister and form a government in the following days.

A former economy minister with pro-business, pro-European views, Macron quit Hollande’s Socialist government last year to launch his independent bid. He is the first French president who doesn’t originate from one of the country’s mainstream parties.

He has promised to reinvigorate French politics by bringing in new faces. His Republic on the Move movement has announced an initial list of 428 candidates for the 577 seats up for grabs in France’s lower house of parliament in June. Macron is seeking a majority of lawmakers so he can pass his programs.

Many of the Republic on the Move candidates are newcomers in politics. Their average age is 46, compared to 60 for the outgoing assembly. Half of them are women. Only 24 are lawmakers running for re-election, all of them Socialists.