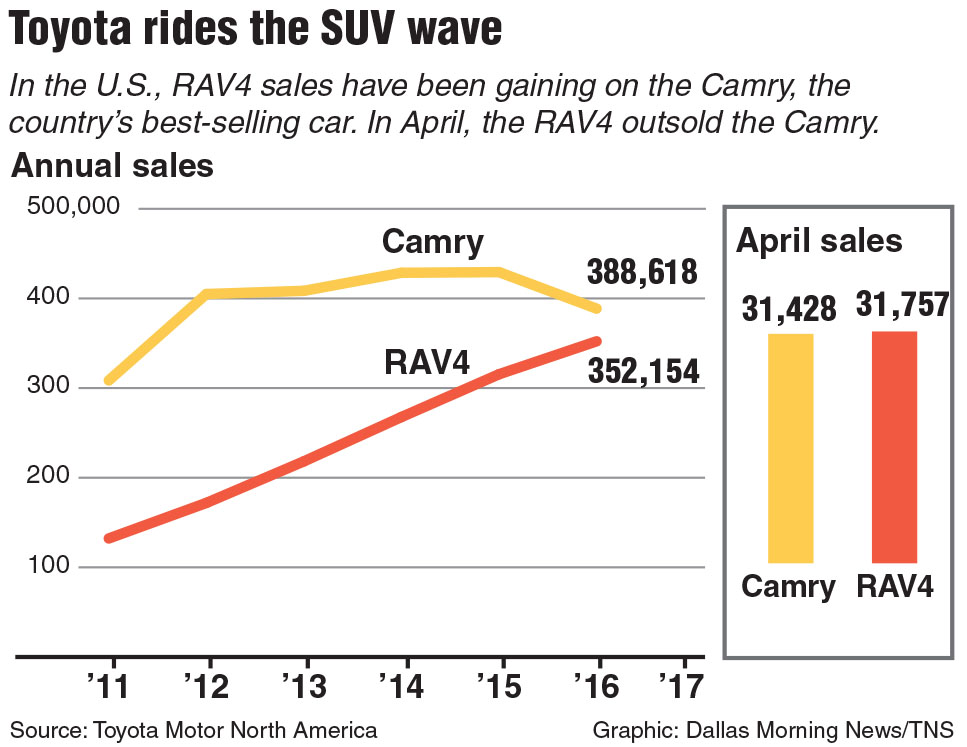 The Toyota Camry has been America’s best-selling car for 15 years. Yet last month, Toyota’s RAV4, a crossover sport utility vehicle, sold 329 more units in the U.S.

It’s the second time this year that the RAV4 has topped the Camry in monthly sales, and the trend says a lot about the direction of the market and how the world’s most valuable automaker is adjusting.

Vehicle sales in the U.S. have been climbing steadily since the recession and set another record last year at about 17.5 million units. That growth has been driven by trucks and SUVs, recently at the expense of passenger cars.

So-called light trucks accounted for over 60 percent of U.S. sales last year, up from half in 2012. The shift continues to accelerate, with trucks and SUVs nearing 63 percent of sales through the first four months of 2017.

This has played to the strength of General Motors, Ford and Fiat Chrysler, which have a stable of popular trucks and large SUVs. Low gasoline prices and high consumer confidence have stoked sales in the segment, and the models’ higher prices and margins are driving strong profits.

The challenge for Toyota is to adjust its products for the new demand and to do so without giving away too much in incentives. Early last month, the industry’s average incentive was nearly $3,500 per vehicle, the highest ever for April, according to J.D. Power.

Toyota is best known for cars, which outsold its light trucks in the U.S. in 2015. But last year, Camry sales fell 9.5 percent. The Prius, which ushered in the hybrid era, had a 26 percent decline in U.S. sales. Even the popular, economical Corolla, which managed to grow in 2016, has declining sales this year.

At an auto forum in New York, Carter acknowledged that dealers probably had too many cars on their lots. A year ago, when the trend was clear, Toyota’s manufacturing base was not set up, he said.

Toyota has adjusted the product mix, ramped up overtime hours for workers, and invested heavily to retool plants and make them more flexible, he said. Several years ago, Toyota expanded a Canadian plant to boost RAV4 production by 50,000 units.

In January, Toyota pledged $10 billion more on upgrades, including the North American headquarters being built outside Dallas. It also announced $600 million for an Indiana plant to boost future production of the Highlander SUV.

“We’re in a much better position than we were a few years ago,” Carter said. “If consumers want to buy utility vehicles, which are red hot right now, that’s what we want to build.”

Carter said that Toyota was on pace to build over 100,000 more pickups and SUVs this year. Plants are running two shifts a day, usually six days a week.

“Toyota is very good at adding flexibility and scaling up production,” said Bernard Swiecki, senior analyst at the Center for Automotive Research in Ann Arbor, Mich. “And they have such a loyal customer base that if people don’t want to buy a Camry, there are a lot of other ways to keep them in the Toyota family.”

One example is the RAV4 hybrid, also an alternative for Prius buyers. Sales are up nearly 15 percent this year, a faster growth rate than the conventional RAV4.

Carter doesn’t expect sedans to outsell SUVs anytime soon. But he’s optimistic about a new Camry design that debuts this year, and the Honda Accord is also getting a makeover. Midsize sedans remain “incredibly important,” Carter said, and account for over two million sales a year for the industry.

“We’re gonna start to see a plateau and, who knows, maybe a little bit of growth,” Carter said.

But incentives are higher than ever, and that’s risky. In the past, automakers used consumer rebates to keep plants running at high capacity, said Stephanie Brinley, senior auto analyst at IHS Markit. That hurt profit margins and residual values, and was unsustainable.

This year, U.S. vehicle sales are forecast to be around 17 million again, which is a healthy market. She believes the most difficult thing will be for companies to cut production of passenger cars.

“Toyota doesn’t want to have too many Camrys and Corollas,” Brinley said. “They’re still working on finding that balance.”