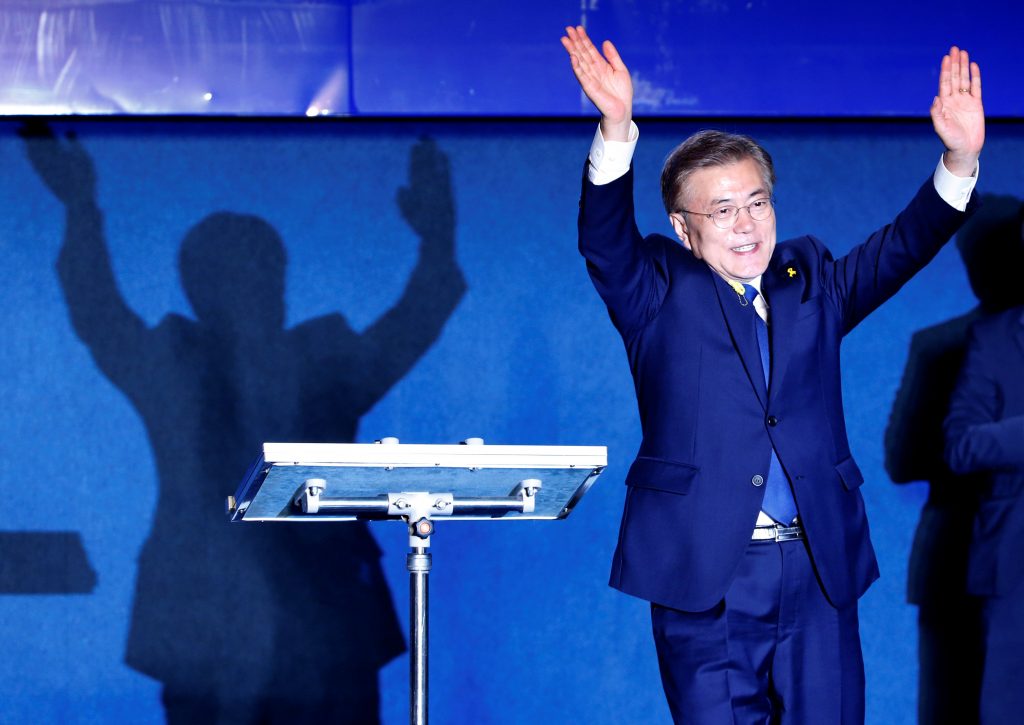 North Korea on Sunday test-launched a ballistic missile that flew for half an hour and reached an unusually high altitude before landing in the Sea of Japan, the South Korean, Japanese and U.S. militaries said. The launch, which Tokyo said could be of a new type of missile, is a direct challenge to the new South Korean president and comes as U.S., Japanese and European navies gather for joint war games in the Pacific.

It wasn’t immediately clear what type of ballistic missile was launched, the seventh such firing this year, although the U.S. Pacific Command said that “the flight is not consistent with an intercontinental ballistic missile.” Japanese officials, however, said the missile flew for about 30 minutes, traveling about 500 miles and reaching an altitude of 1,240 miles — a flight pattern that could indicate a new type of missile.

David Wright, co-director of the Global Security Program at the Union of Concerned Scientists, said the missile could have a range of about 2,800 miles if flown on a standard, instead of a lofted, trajectory — considerably longer than Pyongyang’s current missiles. He said Sunday’s launch may have been of a new mobile, two-stage liquid-fueled missile North Korea displayed in a huge April 15 military parade.

“The president expressed deep regret over the fact that this reckless provocation … occurred just days after a new government was launched in South Korea,” said senior presidential secretary Yoon Young-chan. “The president said we are leaving open the possibility of dialogue with North Korea, but we should sternly deal with a provocation to prevent North Korea from miscalculating.”

Japanese Prime Minister Shinzo Abe told reporters that the launch was “absolutely unacceptable” and that Japan will respond resolutely. Japan’s Foreign Minister Fumio Kishida said he and his South Korean counterpart agreed that “dialogue for dialogue’s sake with North Korea is meaningless.”

The White House took note of the missile landing close to Russia’s Pacific coast and said in a statement that North Korea has been “a flagrant menace for far too long.”

The statement said Washington maintains its “ironclad commitment” to stand with its allies in the face of the serious threat posed by North Korea. The latest “provocation” should serve as a call for all nations to implement far stronger sanctions against the North, it said.

Outside militaries and experts will closely analyze what the North fired. While Pyongyang regularly tests shorter-range missiles, it is also working to master the technology needed to field nuclear-tipped missiles that can reach the U.S. mainland. Past North Korean missiles have flown farther than Sunday’s test, landing closer to Japan, but this launch follows a series of high-profile failures.

Japanese Defense Minister Tomomi Inada said North Korea might have launched a “new type of missile,” given the altitude and duration of its flight. But she said more analysis was needed.

Inada’s remarks suggest the missile might have been on a “lofted” trajectory, meaning it could have a far longer range than it actually flew. Japan’s Kyodo News agency said the missile may be capable of covering a range as far as 2,500 miles) if launched at a normal trajectory, citing unidentified sources.

South Korea’s Joint Chiefs of Staff said in a statement that the missile was fired early Sunday morning from near Kusong, in North Phyongan province.

North Korea’s past satellite rocket launches have been called clandestine tests of ICBM technology, but it is not believed to have tested a true intercontinental ballistic missile yet. The Trump administration has called North Korean ballistic and nuclear efforts unacceptable and has swung between threats of military action and offers to talk as it formulates a policy.

The North’s state media said Saturday that the nation will bolster its nuclear capability unless the United States abandons its hostile policy.

“The United States should never expect us to give up our nuclear capability,” the main Rodong newspaper said in a commentary carried by the Korean Central News Agency. It said President Donald Trump’s “maximum pressure and engagement” policy is only aimed at “stifling us” and will compel the North to “strengthen our nuclear deterrent at the maximum speed.”

The launch also comes as troops from the U.S., Japan and two European nations gather near Guam for drills that are partly a message to North Korea. The USS Carl Vinson, an aircraft supercarrier, is also engaging with South Korean navy ships in waters off the Korean Peninsula, according to Seoul’s Defense Ministry.

Moon, the first liberal leader in Seoul in nearly a decade, said as he took his oath of office that he’d be willing to visit the North if the circumstances were right. Trump has also said he’d be “honored” to talk with leader Kim Jong Un under favorable conditions.

On Saturday, a top North Korean diplomat in charge of U.S. relations, Choe Son Hui, told reporters in Beijing that Pyongyang would be willing to meet with the Trump administration for negotiations “if the conditions are set.” She did not elaborate.