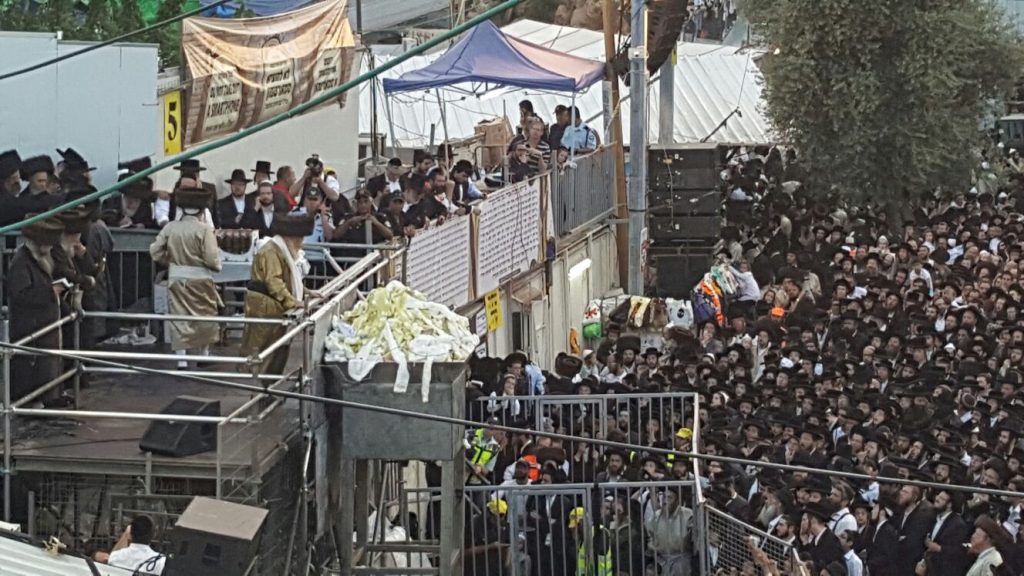 The final hadlakah has been performed at at the kever of Rabi Shimon bar Yochai, shortly before sunset on Lag BaOmer, by the Toldos Aharon Rebbe, shortly after a hadlakah by the Toldos Avraham Yitzchak Rebbe.

As of Sunday afternoon, rescue workers for Magen David Adom and Ichud Hatzalah said that 446 people needed treatment for variety of falls, injuries, burns and other issues. The majority were treated at first-aid stations and released. 47 were taken to hospitals in the region for further treatment.

With the long day behind them, many families were set to be heading home – and rescue services were turning their attention to the dangers inherent in driving. Moshe Teitelbaum, organization chairman of Ichud Hatzalah, called on drivers not to take to the road if they felt tired. “Unfortunately, in past years we have been witness to terrible accidents that were caused by driving when too tired, with drivers losing their concentration or even falling asleep. For visitors who must drive, they must rest often and ensure that they remain alert.”

MDA tended to a family who were lightly injured when their car overturned on Route 90 en route to Yerushalayim.

At the weekly meeting of the heads of the coalition parties with the prime minister on Sunday afternoon, Health Minister Rabbi Yaakov Litzman and Chairman of the Finance Committee Rabbi Moshe Gafni raised the issue of the chaos in Meron.

“The scenes from Meron on Lag BaOmer are reminiscent of a third world country,” said Rabbi Gafni. “Year after year, the same scenarios are played out. Meron is the second most popular tourist attraction in Israel, and the way it is budgeted is outrageous.”

Rabbi Litzman blessed the initiative to set up a committee to oversee the fiascoes of this year. The hope is that finally all the talk will turn into reality and come next Lag BaOmer all problems will be tended to.

The committee, which will also tend to the budget of the Lag BaOmer in Meron will be headed by Finance Minister Moshe Kahlon.

The transportation chaos was not only from Meron. Mrs. S. from Yerushalayim spoke to Hamodia Sunday afternoon after a very difficult experience.

“We left Yerushalayim on the 1 a.m. bus, with the hope to be in Meron for Shacharis at netz. From the onset, I felt this was an older bus, and wouldn’t make the distance to Meron. After about 40 minutes, the driver pulled up at the side and asked us to leave the bus and a new bus would be coming. It took over an hour until the next bus came. This was already close to 3 a.m. When I asked the driver what took a newer, empty, bus over an hour to get to the same place that had taken his bus to get to, he explained that there aren’t enough buses because they weren’t expecting this on Motzoei Shabbos. To me this was unbelievable; all the preparations over the last year, since the day after Lag BaOmer, and this is the result?

“And it doesn’t get better. When we finally made it to Meron, I thought I would at long last be able to daven at the tziyun – after all, who doesn’t have what to daven for – but this too wasn’t to be. There were long lines, with policewomen directing traffic, as if we were the traffic, not allowing anyone to stay inside the tziyun for more than five minutes. I understand that we can’t stand there all day, but five minutes is a little tight. And the way it was done was very undignified for a makom kadosh.

“The story of the Arizal getting off the donkey and walking up the mountain is what came to mind. Not that I am comparing myself to the Ari, but that conditions seemingly haven’t changed over the centuries…

“The Gemara says that Rabi Shimon can be relied on b’shaas hadchak, literally in times of distress. Today I think the pshat can also be that Rabi Shimon is with us, even when it’s tough to get to his kever.

“Our hope is that all our tefillos be answered, together with those of all of Klal Yisrael. That is, after all said and done, the reason we make our way to Meron on this auspicious day, a day noted in the sefarim as a Yom Tefillah.”

Ultimately, the real story of Lag BaOmer is inside the kever itself, where thousands upon thousands daven for yeshuos, shidduchim, hatzlachah in Torah and every kind of siyatta d’Shmaya.

Asking someone who spent the night in Meron to describe the chaos, he noted that ultimately when one comes to the tziyun, all the other hassles are diminished. “When opening a Tehillim, I feel the connection to the words of Tehillim, to Rabi Shimon, and what we really came for; to take part in the simchah and to daven for what we really need.

“Not playing down the chaos, and I hope the lessons will be learned for future years.”

After Shacharis, thousands waited at the bus stops for buses back home.

The bus companies did not manage to keep up with the huge demands, and this caused a backlog of several hours.

Many, including families with children, were kept waiting. The buses that did come were at no time enough for the demand.

“Every year the times of the pressure on the transportation are after the Boyaner hadlakah, after Shacharis at the netz and towards the end of the day,” noted longtime Meron travelers. “This year, being Motzoei Shabbos, and the hadlakah was moved to well after midnight, this meant much more pressure was moved towards the end of the night and Shacharis, and when it came to the crunch, despite much preparation, it all fell threw. And it is a pity, to end such a meaningful experience with a letdown like this.”

Perhaps the highlight of the hilula is the lighting of the traditional fire on the me’arah of the Rashbi by the Boyaner Rebbe, shlita, who upholds the chazakah from his forebears, the Rebbes of the Ruzhin dynasty, zy”a.

This year, with Lag BaOmer on Motzoei Shabbos, the Boyaner Rebbe delayed the lighting of the main medurah until 1:15 a.m., in order to ensure there would be no chillul Shabbos, chas v’shalom. The police chief promised the Rebbe that if he delays the bonfire until 1:15 a.m., there would be no chillul Shabbos by the police relating to preparations for the event.

Ichud Hatzalah said that 96 people were treated over Shabbos in Meron, for minor injuries such as bruising, fainting and dehydration.

A crowd estimated to be in the tens of thousands, from all walks of Jewish life, from across Eretz Yisrael as well as many from overseas, spent Shabbos in Meron.