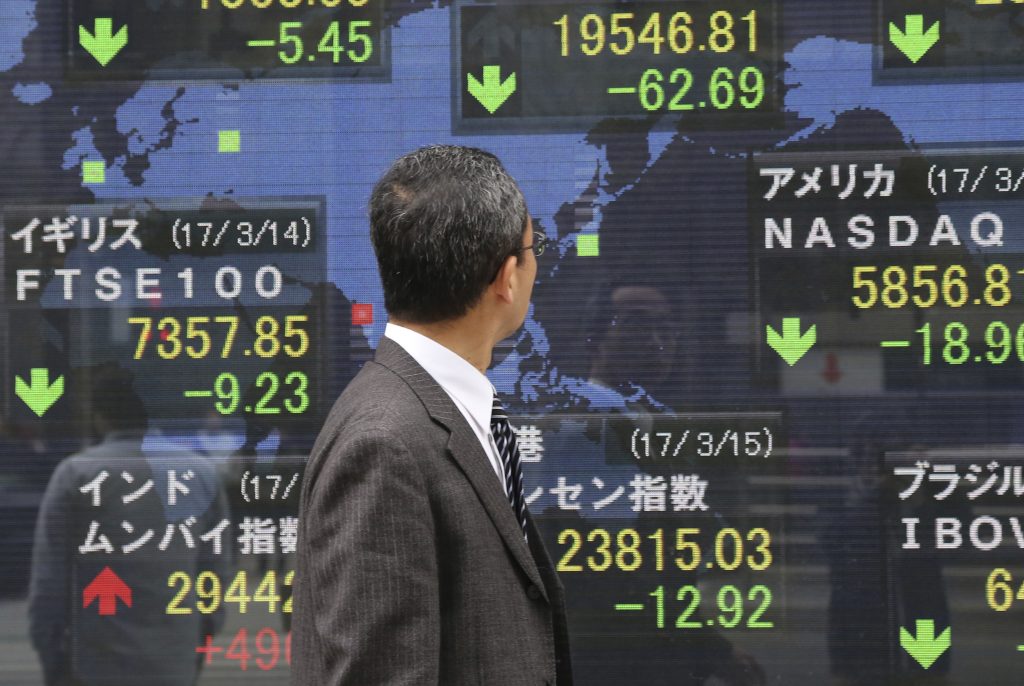 Asian shares were hobbled on Friday by a downbeat performance on Wall Street though they remained on track for weekly gains, while oil prices extended a rally on hopes for output cuts.

“European stocks are still in the sweet spot of basking in the removal of political risk in Europe for the time being, though it is somewhat ironic that we could see a modest decline on the week as investors take stock,” said Michael Hewson, chief markets analyst at CMC Markets in London.

MSCI’s broadest index of Asia-Pacific shares outside Japan erased early slight gains and was down 0.2 percent in afternoon trading, shy of nearly two-year highs probed in the previous session but still up 1.5 percent for the week.

“We’ve had a nervous twitch about China, over this week,” said Sean Darby, chief global equity strategist at Jefferies. “We’ve had a bit more of a regulatory overhang coming through in the financial system.”

Earlier in the day, China’s central bank injected fresh funds through a medium-term lending facility while keeping a tight rein on short-term funding in what appeared to be a further effort to dampen speculative investment.

Japan’s Nikkei stock index ended down 0.4 percent, as investors locked in gains after it came close to the psychologically significant 20,000 milestone this week, above which it hasn’t traded since December 2015. It added 2.3 percent for the week.

The political turmoil tends to have a secondary effect on markets because of its impact on investors’ appetite for risk and their expectations that the Trump administration will succeed in passing tax reform and stimulus steps.

Combined with a tightening labor market, firming inflation backs market expectations that the Federal Reserve is poised to raise interest rates at its meeting next month. The central bank has forecast two more hikes this year after a quarter point increase in March.

But lower Treasury yields offset the dollar’s upward pressure. The benchmark 10-year U.S. yield stood at 2.382 percent in Asian trade, down from its U.S. close of 2.400 percent as well as a nearly six-week high of 2.423 percent touched on Thursday.

The dollar index, which tracks the greenback against a basket of six major rivals, was flat on the day at 99.622 , but was up 1 percent for the week.

Dovish comments from a European Central Bank official weighed on the single currency. Maintaining its ultra-loose monetary policy for longer is the safer way for the ECB to avoid an economic relapse, its vice-president Vitor Constancio told Reuters on the sidelines of an ECB conference on Thursday, signaling a change of tack was unlikely until the autumn.

Sterling was steady on the day at $1.2886 after dropping to a one-week low on Thursday following the Bank of England’s decision to keep interest rates unchanged. Policymakers indicated that rates were unlikely to rise until late 2019.

Both benchmarks had risen for a second day on Thursday, finishing up more than 1 percent at their highest respective closing prices in a week as support grew for OPEC output cuts following U.S. government data earlier in the week showing a big draw in crude inventories.