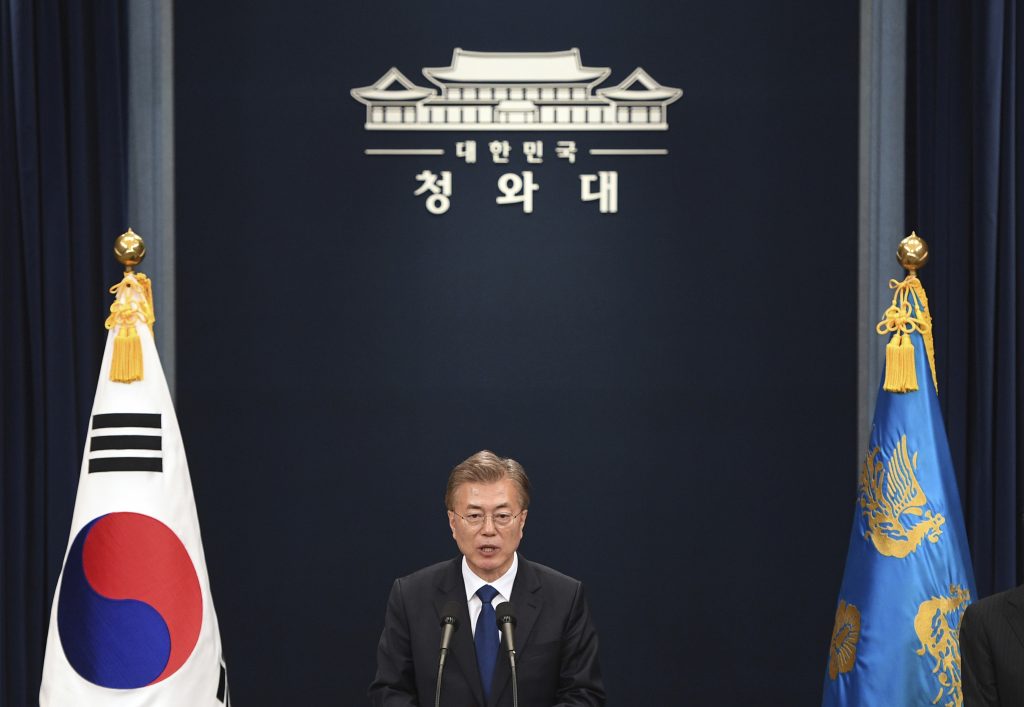 Moon Jae-in, a liberal former human–rights lawyer, was sworn in on Wednesday and said in his first speech as president he would immediately address security tensions that have raised fears of war on the Korean Peninsula.

Moon first spoke to Chinese President Xi Jinping and later to Japanese Prime Minister Shinzo Abe. The conversations were dominated by how to respond to North Korea’s rapidly developing nuclear and ballistic missile programmers, which are in violation of U.N. Security Council resolutions.

“The resolution of the North Korean nuclear issue must be comprehensive and sequential, with pressure and sanctions used in parallel with negotiations,” Moon’s spokesman, Yoon Young-chan, quoted Moon as telling Xi.

“Sanctions against North Korea are also a means to bring the North to the negotiating table aimed at eliminating its nuclear weapons,” Yoon told a briefing, adding that Xi indicated his agreement.

Moon has taken a more conciliatory line with North Korea than his conservative predecessors and advocates engagement. He has said he would be prepared to go to Pyongyang “if the conditions are right.”

Moon’s advocacy of engagement with North Korea contrasts with the approach of the United States, South Korea’s main ally, which is seeking to step up pressure on Pyongyang through further isolation and sanctions.

U.S. President Donald Trump, who spoke with Moon on Wednesday, this month opened the door to meeting North Korea’s Kim Jong Un, saying he would be honored to meet the young leader — but under the right circumstances.

U.S. officials have said they see no value in resuming international talks with North Korea under current circumstances and that Pyongyang must make clear it is committed to denuclearization.

A spokeswoman for the U.S. State Department said Washington had worked closely with Seoul on North Korea.

“The United States looks forward to continuing our close coordination with the Moon administration in addressing the threat from North Korea,” Katina Adams said.

“We remain open to talks with the DPRK, but need to see that the DPRK will cease all its illegal activities and aggressive behavior in the region,” she said, referring to North Korea by the acronym for its official name, the Democratic People’s Republic of Korea.

Regional experts have believed for months that North Korea is preparing for its sixth nuclear test. It has also been working to develop a nuclear-tipped missile capable of reaching the United States, presenting Mr. Trump with perhaps his most pressing security issue.

Trump told Reuters in an interview last month that major conflict with North Korea was possible, though he would prefer a diplomatic outcome.

North Korea says it needs its weapons to defend itself against the United States, which it says has pushed the region to the brink of nuclear war.

“How to respond to North Korea … is an urgent issue. I would like to closely cooperate with the president to achieve the denuclearization of North Korea,” Abe told Moon.

But Abe also said “dialogue for dialogue’s sake would be meaningless” and he called on North Korea to demonstrate “sincere and concrete action,” Hagiuda said, adding that Moon shared Abe’s views.

Japan has been concerned that Moon will take a tough line on feuds stemming from the bitter legacy of its 1910-45 colonization of the Korean Peninsula and could fray ties at a time when cooperation on North Korea is vital.

Moon told Abe to “look straight at history” and not make the past “a barrier,” Korea’s presidential office said.

While South Korea, China and Japan all share worry about North Korea, ties between South Korea and China have been strained by South Korea’s decision to install a U.S. anti-missile system in defence against the North.

China says the Terminal High Altitude Area Defense (THAAD) undermines its security as its powerful radar can probe deep into its territory.

China says the system does little to curb the threat posed by North Korea’s nuclear and missile programmers, which Pyongyang has been pressing ahead with in defiance of U.S. pressure and U.N. sanctions.

The deployment of THAAD was agreed last year by South Korea’s previous administration after North Korea conducted a long-range rocket launch that put an object into space.

Moon came to power with a promise to review the system, and he told Xi that North Korea must cease making provocations before tension over the deployment could be resolved, officials said.

“President Moon said he understands China’s interest in the THAAD deployment and its concerns, and said he hopes the two countries can swiftly get on with communication to further improve each other’s understanding,” Yoon told a briefing.

South Korea and the United States began deploying the THAAD system in March and it has since become operational.

As well as clouding efforts to rein in North Korea’s nuclear ambitions, the THAAD deployment has also led to recriminations from Beijing against South Korean companies.

Moon explained the difficulties faced by South Korean companies that were doing business in China and asked for Xi’s “special attention” to ease those concerns, Yoon said.

China has denied it is doing anything to retaliate against South Korean businesses.