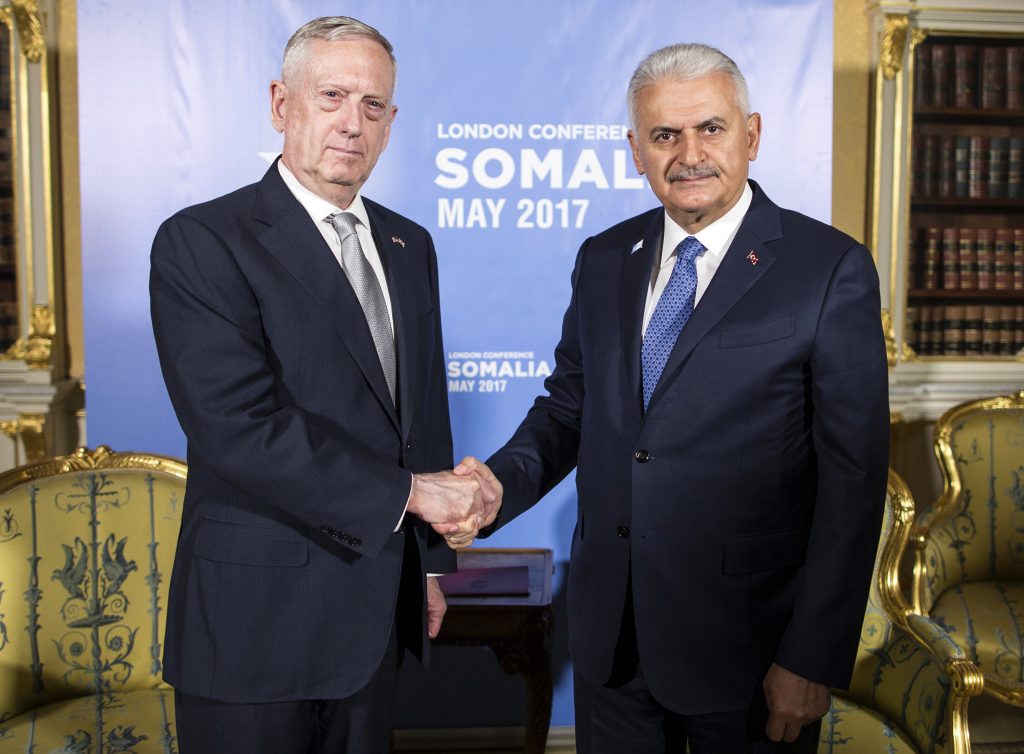 Pentagon chief Jim Mattis on Thursday made clear that America is committed to protecting Turkey, a NATO ally that is upset at the Trump administration’s agreement to arm anti-Islamic State fighters in Syria that Turkey considers terrorists.

Mattis stressed the enduring nature of the U.S.-Turkey relationship in a meeting with Prime Minister Binali Yildirim, the first face-to-face contact between officials from the two countries since the U.S. announcement about military support for the Syrian Kurds.

In talks that Pentagon chief spokesperson Dana White described as good and calm, the officials reaffirmed their support for peace and stability in Iraq and Syria.

The U.S. is convinced that the Kurdish fighters, known as the YPG, are the most effective local force in trying to oust IS militants from their stronghold in Raqqa, Syria. Turkey wants the arms agreement reversed, and Yildirim on Wednesday said the U.S. cannot use one terrorist group to fight another.

Mattis and Yildirim met for about 30 minutes before the start of an international conference in London on security threats and humanitarian crises in Somalia.

A senior American official said the U.S. will step up joint intelligence-sharing with the Turks in an effort to help them better target terrorists. The move, first reported by The Wall Street Journal, is part of the assurances to Turkey, which is concerned that the weapons will end up in the hands of its enemies.

The official, who was not authorized to discuss the issue publicly and spoke on condition of anonymity, also said that the weapons have not started flowing to the Kurds.

Mattis has played down the friction between the allies, saying that while “it’s not always tidy,” they will resolve any differences.

Turkey’s president, Recep Tayyip Erdogan, is to visit President Donald Trump in Washington next Tuesday. Erdogan has demanded that Washington undo the arms decision, and said he would take up the issue with Trump.

The Trump administration has not specified the kinds of arms to be provided. U.S. officials have indicated that 120 mm mortars, machine guns, ammunition and light armored vehicles were possibilities. The officials, who spoke on condition of anonymity because they weren’t authorized to publicly discuss the matter, said artillery or surface-to-air missiles would not be provided.

A spokesman for the U.S.-led coalition against IS, Col. John Dorrian, said Wednesday that the weapons would be delivered to the Kurds soon. He and other officials have said the U.S. will closely monitor the weapons’ distribution and ensure that they are used only against IS.

The Syrian Kurds have been encircling Raqqa, preparing for the launch of what the U.S. military predicts will be a long and difficult battle to retake the city.