Technology Here’s How the Russians Might Have Snuck a Recording Device into the Oval Office
Health, Science & Technology 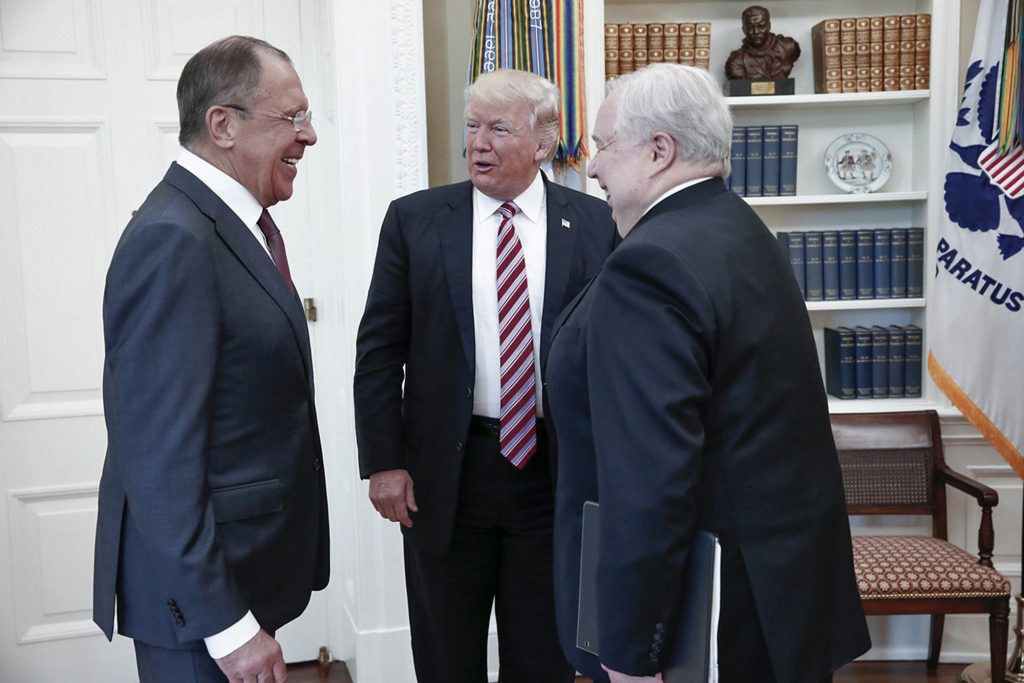 The photograph was unexpected.

It shows President Donald Trump meeting with Russian Foreign Minister Sergey Lavrov on Wednesday, with a coterie of other officials — including Russian Ambassador Sergey Kislyak — in attendance. Although the meeting wasn’t unexpected, the photograph was, taken by a photographer who was accompanying Lavrov and was subsequently pushed out by Russia’s state news agency.

When the photo became public, people were quick to question the wisdom of allowing into the Oval Office at least one Russian who hadn’t been screened enough to identify that dual role. Much less, one who brought with him electronic equipment in the form of his camera. The Russians would love to place a recording device in the Oval Office, of course, and have a track record of using innocuous-seeming methods to bug their opponents. (Gizmodo noted that the Russians had once had schoolchildren present the U.S. ambassador to Russia with a decorative carving that included a listening device.)

But, really, how much damage could be done? Could an agent actually get away with planting a device in the Oval Office?

An expert we spoke with said they could — but perhaps not for long.

Todd Morris is founder and chief executive of Brickhouse Security, a company based in New York that works with law enforcement and corporate customers on surveillance and counter-surveillance techniques. Some of Brickhouse’s clients are financial firms that are looking to prevent surveillance of confidential information that could be used to their disadvantage.

When we spoke by phone, I asked Morris to explain how he would plant a recording device in the Oval Office — and how the information would make its way back out.

“I would bring in a device roughly the size of a book of matches, very small,” he said. “It would be set up to record on audio record, audio activated. It would store that data locally. And then, within a certain amount of time and in a burst of transmission, it would transmit that to a server.”

Here’s what that accomplishes.

First, it’s small enough to be hidden easily from the Secret Service. (In The Post’s initial report on the meeting, we note that former intelligence officials say that a standard visitor screening on entering the White House might not detect a sophisticated device.) Once in the Oval Office, the device could be slipped out of sight fairly easily.

“Go to any magic show, and you can see that sleight of hand is not all that hard to master,” Morris said. “To take a device the size of a matchbook and slip it between some couch cushions or drop it under the carpet as you’re tying your shoe? Not impossible.” Or, say, if you’re standing next to a bookshelf in a small group of people.

Which brings us to the second goal of Morris’ device: recognizing that it’s not going to be there forever.

“It would eventually be found,” he said. “It is an office that does get an extensive sweep by well-trained professionals” — although not necessarily after every meeting. Such a sweep, he said, would include far more than simply holding up some electronic gizmo that would ping if it detected a signal. It would mean looking in every imaginable place — behind electrical outlets, inside cushions — for anything that might be used to spy on Oval Office meetings. “They really disassemble most of the room,” Morris said.

In some cases, spies can drop off devices that don’t need to transmit out, because the device can simply be picked up again later. That’s pretty clearly not the case here. Reporting indicates that Russian President Vladimir Putin asked Mr. Trump to host Lavrov in the White House, emphasizing how unusual such access would be. It also makes clear that the Russian government actively sought that access, which is relevant to the current discussion.

Knowing that the device would be found, then, Morris’ would transmit a signal out in as quick a burst as possible. This is meant to prevent White House security from detecting the burst — and then tracking down its point of origin. Morris figured that he’d send out the data after about 12 hours, although it would also be useful to send a burst after only a few hours, given that you’d then have captured the conversation debriefing the Russians’ visit.

This raises the question of whether a signal could escape the Oval Office. Morris was confident that it could. The room itself isn’t a SCIF — a specially designed secure location that’s meant to contain electronic communication and prevent eavesdropping. But it does have certain counter-surveillance technologies. For example, Morris said, it probably has a special device attached to the windows that causes them to vibrate, preventing someone from remotely training a laser on the glass to detect the vibrations caused by people speaking in the room.

There are two options for transmitting out: using a normal cell-tower transmission or using a low-frequency signal that would stand a better chance of passing through the walls of the White House. Nor would the Russians need to park a white van subtly labeled “VLADIMIR’S FLOWERS” on Pennsylvania Avenue to detect the emission. Such a signal could travel a mile, Morris said, allowing them to camp out in a nearby hotel, for example.

Morris, too, was amazed that this was even an issue.

“Obviously the first line of defense for White House security is pre-screening of guests,” he said. “The White House is known traditionally as being one of the most secure places on the planet. The fact that someone got in who it sounds like held a dual role without good screening . . . is a little bit shocking.” You don’t get frisked when you enter the White House grounds, he said, because they don’t invite in people who might need to be frisked.

For what it’s worth, the photographer who’s been the focus of the speculation wrote a post on social media denying that he was up to anything nefarious — calling such speculation “hysteria” — and emphasizing that he’d been a member of the media for years.

“I passed the routine check on the scanner, a personal inspection, then your sniffing dogs,” it reads, according to the social media rough translation (which we’ve cleaned up a bit). “On the footage, I went with only two cameras. All things, including cell phone, I left in the other room” before entering the Oval Office.

He didn’t offer any information about what he or others in his party might have accidentally left behind.