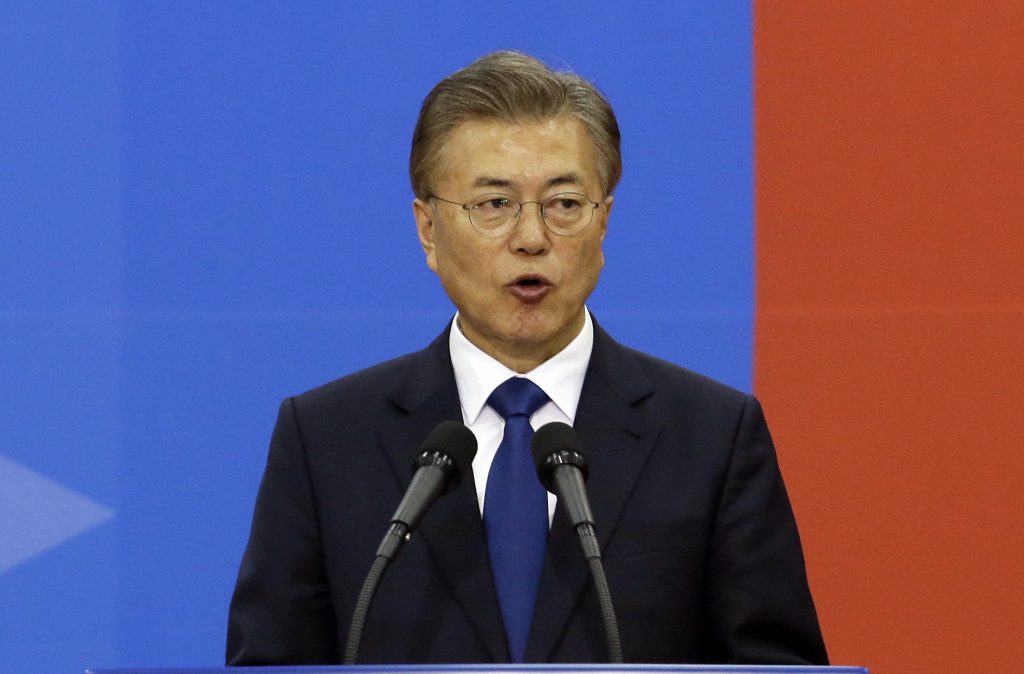 Moon’s softer stance on North Korea could create friction with Washington, which has swung from threats of military action to hints of dialogue as it seeks to formulate a policy under President Donald Trump.

Moon, speaking during his oath of office as the first liberal leader in a decade, also said he’ll “sincerely negotiate” with the United States, Seoul’s top ally, and China, South Korea’s top trading partner, over the contentious deployment of an advanced U.S. missile-defense system in southern South Korea. The system has angered Beijing, which says its powerful radars allow Washington to spy on its own military operations.

In a speech at the National Assembly hours after being declared the winner of Tuesday’s election, Moon pledged to work for peace on the Korean Peninsula amid growing worry over the North’s expanding nuclear weapons and missiles program.

“I will quickly move to solve the crisis in national security. I am willing to go anywhere for the peace of the Korean Peninsula — if needed, I will fly immediately to Washington. I will go to Beijing and I will go to Tokyo. If the conditions shape up, I will go to Pyongyang,” Moon said.

Moon, whose victory capped one of the most turbulent political stretches in the nation’s recent history, assumed presidential duties early in the morning after the National Election Commission finished counting and declared him winner of the special election necessitated by the ousting of conservative Park Geun-hye.

He is also expected to nominate a prime minister, the country’s No. 2 job that requires approval from lawmakers, and name his presidential chief of staff later Wednesday.

Moon thanked the millions of people who staged peaceful protests for months calling for the ousting of Park, who was impeached and arrested in March over a corruption scandal. He also offered a message of unity to his political rivals — Moon’s Democratic Party has only 120 out of 300 seats in the National Assembly, so he may need broader support while pushing his key policies.

“Politics were turbulent [in the past several months], but our people showed greatness,” Moon said.

“In face of the impeachment and arrest of an incumbent president, our people opened the path toward the future for the Republic of Korea,” said Moon, referring to South Korea’s formal name. To his rivals, Moon said, “We are partners who must lead a new Republic of Korea. We must put the days of fierce competition behind and hold hands marching forward.”

Taking up his role as the new commander in chief, Moon began his duties earlier in the day by receiving a call from Army Gen. Lee Sun-jin, chairman of South Korea’s Joint Chiefs of Staff, who briefed him on the military’s preparedness against North Korea.

He then left his private residence in an emotional send-off from hundreds of people and visited a national cemetery in Seoul, where he wrote in a visitor book: “A country worth being proud of; a strong and reliable president!”

He also visited the offices of opposition parties, seeking support in governing the country split along ideological lines and regional loyalties.

The leaders of China and Japan sent their congratulations. South Korea’s relations with Japan are strained and relations with China have been irritated over the deployment of the THAAD missile-defense system. Moon made a campaign vow to reconsider THAAD.

The son of refugees who fled North Korea during the war, Moon will lead a nation shaken by the scandal that felled Park, whose criminal trial is scheduled to start later this month.

Taking office without the usual two-month transition, Moon initially will have to depend on Park’s Cabinet ministers and aides, but is expected to move quickly to replace them. He will serve the typical single five-year term.

Moon was chief of staff for the last liberal president, the late Roh Moo-hyun, who sought closer ties with North Korea by setting up large-scale aid shipments and working on now-stalled joint economic projects.

Winning 41 percent of the votes, he comfortably edged conservative Hong Joon-pyo and centrist Ahn Cheol-soo, who had 24 percent and 21 percent, respectively.

The conservative Hong had pitched himself as a “strongman,” described the election as a war between ideologies and questioned Moon’s patriotism.

Park’s trial on bribery, extortion and other corruption charges could send her to jail for life if she is convicted. Dozens of high-profile figures, including Park’s longtime confidante, Choi Soon-sil, and Samsung’s de-facto leader, Lee Jae-yong, have been indicted along with Park.

Moon frequently appeared at anti-Park rallies and the corruption scandal boosted his push to re-establish liberal rule. He called for reforms to reduce social inequalities, excessive presidential power and corrupt ties between politicians and business leaders. Many of those legacies dated to the dictatorship of Park’s father, Park Chung-hee, whose 18-year rule was marked by both rapid economic rise and severe civil rights abuse.

Many analysts say Moon likely won’t pursue drastic rapprochement policies because North Korea’s nuclear program has progressed significantly since he was in the Roh government a decade ago.

A big challenge will be President Trump, who has proven himself unconventional in his approach to North Korea, swinging between intense pressure and threats and offers to talk.

“South Koreans are more concerned that Trump, rather than North Korean leader Kim Jong Un, will make a rash military move, because of his outrageous tweets, threats of force and unpredictability,” Duyeon Kim, a visiting fellow at the Korean Peninsula Future Forum in Seoul, wrote recently in Foreign Affairs magazine.