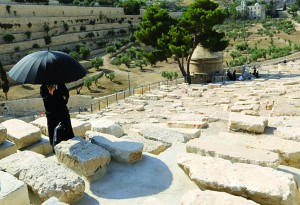 A former Yerushalayim city councilwoman has complained to Mayor Nir Barkat of a stone-throwing attack on her family’s car at Har Hazeisim on Sunday, and the failure of police to prevent or respond to the incident in a timely manner, Arutz Sheva reported.

In a letter to the mayor, Minna Fenton described the harrowing experience that occurred as she was leaving the holy site after a memorial service for her father:

“A stone was thrown with great force at the car in which my daughter was driving. The Arab youth came closer to the car without fear and then fled into the crowd of Arabs who stood in the street and did nothing. The car window was smashed to smithereens, the one next to where my son was sitting adjacent to the driver. The stone landed in the car and my daughter was injured. Her face was bleeding and the window next to her was smashed into small shards. My son was covered in glass,” Fenton wrote.

Fenton continued on to the gate of the Hebrew University campus at Har Tzofim, where they were met by the university’s security officer and medical response teams. However, it took the police “more than 20 minutes to arrive,” she said.

Her children were evacuated to nearby Hadassah hospital. B’chasdei Shamayim, their injuries turned out to be “light.”

However, Fenton cautioned that “this is not a small incident, this was an incident with murderous intent and this is how it should be addressed. They are laughing at us and at the Jewish sovereignty which is non-existent.”

She also recalled her efforts to arrange for public transport to the cemetery while serving on the city council, but to no avail:

“They said they didn’t have stone-proof buses, they said it wasn’t economically viable. I said I would fight for this, we can’t give in. Hundreds of thousands of families from around the country want to reach Har Hazeisim, but they are scared and worried.”

Three Israeli Arabs Arrested for Plotting to Join IS