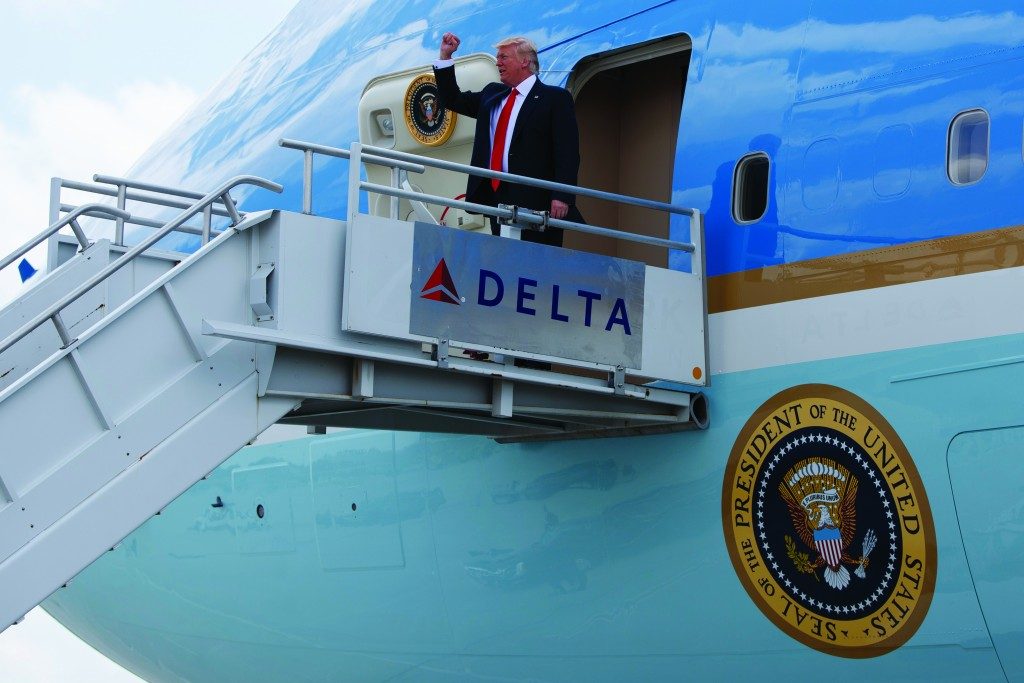 The political climate in the U.S. in the aftermath of the election of Donald J. Trump is a departure from any previous post-election period and, frankly, extremely troubling. In its simplest form, the liberal left feels cheated of a victory they felt was within their grasp. The “new order” (of liberalism) they felt was theirs in the aftermath of the election of Barack Obama suddenly was snatched out of their clutches and abruptly came to a screeching halt. Their heir apparent, Hillary Clinton, in their mind, was the popular choice of Americans (she won the popular vote by three million votes), although the electoral system again proved that it was a necessary barometer of the will of Americans of all stripes and not just of the (liberal-leaning) major population centers on both coasts.

Almost from the moment Mr. Trump was elected, the left has made every effort to delegitimize the new president and to prevent his often “erratic” behavior (such as his continued use of Twitter) from becoming the new norm. They jumped at every pronouncement of the president, particularly his attempts to protect the borders of the U.S., as being anti-Muslim, anti-Mexican and anti-immigration. President Trump’s attempts at overhauling Obamacare and taxes gave the left further fodder to step up what it now termed the “resistance.”

The very use of the term “resistance” is, to say the least, completely alien to American values and to its democratic way of life. Not only was the left not accepting of the election results, it was now part of a resistance moment. Resistance? A resistance movement, says the dictionary, is “an organized effort by some portion of the civil population of a country to resist the legally established government or an occupying power and to disrupt civil order and stability.” Resistance movements like the one that opposed the Nazis in World War II are perfectly legitimate. So are similar movements that took on brutal dictatorships and even Communism. But in the U.S., after our democratically held elections, resistance is clearly out of character for a nation that prides itself in its democratically held elections.

Hillary Clinton, Barack Obama and Joe Biden are all now part of the resistance. They have each vowed to be part of or indeed “lead” the resistance. What does that mean? According to leading leftists, it means making sure that President Trump is never accepted as the legitimate leader of our country and the free world. They are, of course, nurtured by the leftist media, including CNN, The New York Times and The Washington Post.

Which brings me to the issue of respect — if not for the man, then for the office. Chazal have long admonished us that dina d’malchusa dina and that we should pray for the welfare of the leader of the country we live in. For Jews, it was simple; it meant that the welfare of the head of state was paramount because it related directly to the well-being of the Jews. How disturbing was it to read that several Rabbis refused to say the customary tefillah for the president? Perhaps these Rabbis should be reminded that we are commanded to say a brachah when we see a president and that even in the days of the czar, Jews were mispallel for his well-being. “Long live the czar,” was the rallying cry even in the face of pogroms and persecution.

So for those Jews who bought into the liberal agenda because it was part of their anschauung of tikkun haolam, how can this be at the expense of other more important values such as dina d’malchusa dina, namely, that the electorate has spoken? Freedom of speech does not give one the right to “resist,” especially when the resistance is based upon a need to speak out because their candidate has lost or that some liberal agenda items were being dissed.

It is no secret that men like billionaire George Soros, a perfect example of a self-hating Jew, are stirring up the resistance, which includes taking to the streets every few days not only in the U.S. but worldwide. Is this not a double standard? It is fair to say that there were many Americans who were less than thrilled at the election of Barack Obama in 2007. Yet, there was no resistance, no demonstrations in the streets, and not a whimper from outgoing President George Bush. The resistance came in the form of a huge GOP victory in the midterm elections.

The sinister campaign of the left was most pronounced during the so-called first 100 days of the president. The recent litmus test of a new president was certainly not applied fairly to President Trump, especially since Congress had not even confirmed all of his nominees for the cabinet. He was deemed a failure by some because he had failed on health care when it did not initially pass in the House of Representatives (although he succeeded a few days later), and had not yet managed to pass a tax cut even while many stumbling blocks were placed in his way to success.

Presidents often make pronouncements and pledges during a campaign that they modify once they take office. That is only natural, as the new president becomes privy to new intelligence information as well as other realities. In Mr. Trump’s case, it became a “Gotcha!” for the Left, to be used as yet another indication of the president’s instability.

In a government like ours, the existence of an “opposition” is welcome, particularly in a two-party system, as well as the separation of powers which offers many checks and balances. What is not welcome is the type of “resistance” that we are currently experiencing as well as the lack of respect for the president and the office.