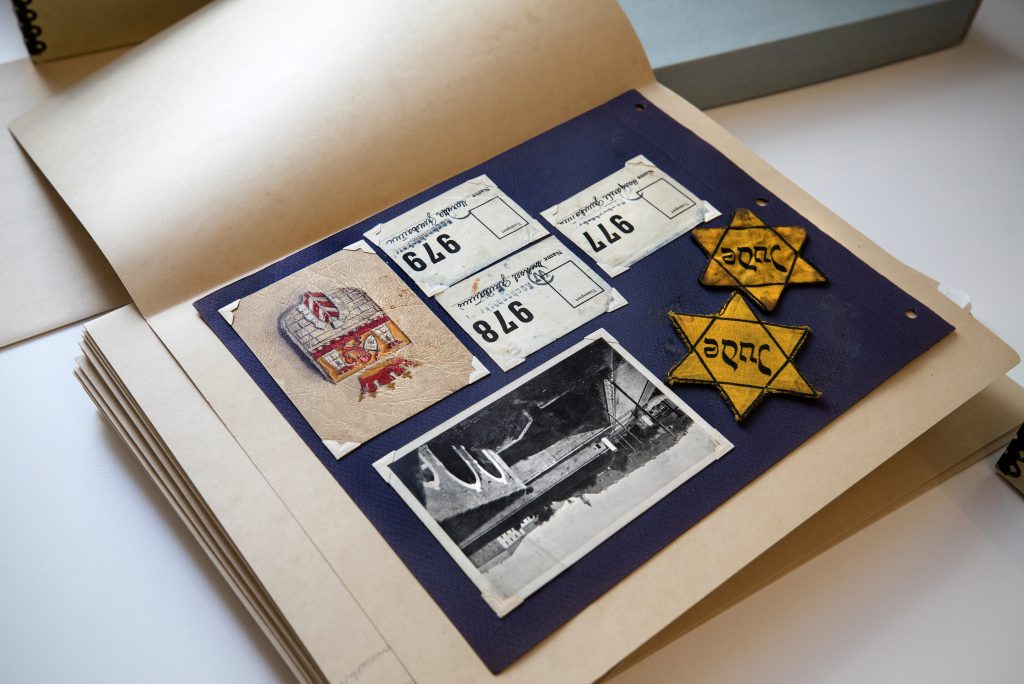 Guta Strykowski’s terrors would often come at night as she slept. She wouldn’t wake up right away, but she would dream that she was back in the Bergen-Belsen concentration camp, and her screams would disturb everybody in the little house on 28th Street in San Francisco.

Her husband would rouse her. Frightened and shaking, she would be unable to go back to sleep.

So reported a psychiatrist on Jan. 18, 1966, in a letter that resides in a tan folder on a shelf in the U.S. Holocaust Memorial Museum’s new collections and conservation center in Bowie, Md.

It is the only document in her file – a 15-page, neatly typed glimpse into the horror of one woman’s encounter with the Holocaust.

It’s one of the array of items that have just been moved into the $50 million facility that now houses the bulk of what the museum says is the most comprehensive Holocaust collection in the world.

The formal completion of the move was Friday.

The letter concerning Strykowski, a Polish Jew who was beaten, starved and brutalized in a string of ghettos and Nazi concentration camps during World War II, is one of millions of documents the center has shelved in row upon row of gray archival boxes.

Some files, like Strykowski’s, contain a single item. Others, like the papers of Robert M.W. Kempner, a prosecutor at the Nuremberg war crimes trials, are voluminous, said Travis A. Roxlau, the museum’s director of collection services.

– A white wedding dress made from a parachute for a young Jewish woman in a displaced persons camp in Germany right after the war. At least a dozen other brides at the camp wore the same dress.

– An antiseptic-looking desk from a Nazi medical center where mentally and physically disabled people were processed for extermination.

– The scrapbook of a woman who, with her two children, avoided being shipped to the Auschwitz concentration camp by making teddy bears for German youngsters.

Many objects are “the items that people carried with them and saved that were very important to them,” Roxlau said last week at the site, officially the David and Fela Shapell Family Collections, Conservation and Research Center.

“Behind every object is an individual . . . with a unique story,” he said.

The Holocaust was the systematic murder by the Nazis and their allies of more than 6 million European Jews and others before and during World War II.

The U.S. Holocaust Memorial Museum in Washington honors the victims and documents the catastrophe.

Starting in 1990, the museum’s collections were stored in a leased warehouse in Linthicum, Md.

By 2010, museum officials realized they would soon be out of space, and their collections were likely to grow as Holocaust survivors aged and families sought a proper place to donate precious artifacts.

“The eyewitness generation is quickly passing away,” Roxlau said.

The museum projects that its collections will double in size within the next 10 to 15 years. So the center has room inside for growth, and space outside for expansion.

Ground was broken for the center in early 2015, and the work was completed Feb. 1.

The moving process began last September. The first truckload of artifacts – one of 23 tractor-trailer loads – arrived at the new site in February. The last arrived March 31.

During a visit to the center last week, Roxlau showed samples of the holdings.

In a document vault, he pulled a box from a shelf at random and opened the folder containing the Strykowski letter, which he had never seen before.

It was addressed to the German consulate in San Francisco, probably in the hopes of getting some kind of compensation, he said.

The daughter of a shoemaker, Guta Strykowski was 17 when she was first imprisoned with her parents and three siblings in the Jewish ghetto of Lodz, Poland, wrote the psychiatrist, Peter F. Ostwald of the University of California Medical Center in San Francisco.

There, her father had starved to death. She was forced to make shoes for German soldiers and suffered from malnutrition and sickness.

“In 1943 or 1944, the patient is not sure which year, the Jews were rounded up and put on trains for Auschwitz Concentration Camp,” the psychiatrist wrote.

Once there, she was separated from her family and taken away with 500 other women. “She describes this sudden separation as the most disturbing experience of her life,” Ostwald wrote.

“It all happened in a split second,” she told the doctor. “I never saw my mother again.”

Strykowski said the Nazis shaved her head, and forced her and the other women to march before Nazi “doctors.”

She was then sent to a labor camp in Hamburg, where she helped clean up rubble from allied bombing raids. She was later moved among other camps, and wound up in the Bergen-Belsen concentration camp, where she was liberated by the British in 1945.

She returned to Lodz hoping to find family members. None of them, nor any of her friends, had survived.

But there she met her husband, Abram, who had lost his first wife and a son in the Holocaust.

Together they moved to a displaced persons camp in Austria in 1946, had two children, and moved to San Francisco, where Abram had a brother, in 1950.

Twenty years after the war, she was still tormented by the memory of the camps.

“The dreams are terrible,” she told the doctor. ” It’s always the same thing. Somebody is after me. They chase me, they want to beat me or kill me.”

The doctor described Strykowski, who was then 44, as shy. She wore a pink dress and blue coat during the examination. She had a pronounced squint and an accent, he wrote.

Her prognosis was guarded, the psychiatrist concluded. “I do not expect any significant improvement in her symptoms or illness,” he wrote.

Later that year, her daughter donated the psychiatrist’s letter to the museum.

Travis Roxlau fetched the key, and opened the door to a locked cabinet in the center’s pristine personal artifacts vault. He slid out a tray and, there, under folds of opaque tissue, was a white wedding dress.

It had a white ribbon that could be tied in the back, and a story.

The dress was made right after the war from a parachute acquired by Ludwig Frydman, 21, for his betrothed, Lili Lax, 22, in the displaced persons camp in Celle, Germany, near Bergen-Belsen. Lili had told Ludwig that she had always wanted a white wedding dress, so Ludwig traded two pounds of coffee and cigarettes to a former German aviator for the parachute, according to the museum.

Ludwig had lost his parents and seven siblings in the Holocaust. Lili’s father and brothers were gassed at Auschwitz. The couple met in June 1945 and were married in the Celle synagogue on Jan. 27, 1946.

The light from the north-facing windows was gentle, and easy on the old scrap book that conservator Emily Olhoeft examined at her desk in the center’s high-tech paper conservation laboratory.

The lab was designed to have windows allowing in the less-damaging light from the north.

The scrapbook at hand was created by Margaret Gruenbaum, a lawyer’s wife from Prague, who was incarcerated at the Nazi’s “propaganda” camp at Theresienstadt, in Czechoslovakia.

The Nazis would show off Theresienstadt to visiting Red Cross officials and dignitaries to suggest that their camps were relatively benign. Visitors would be shown camp gardens and cultural events.

In reality, it was a collection center from which Jews were sent to ghettos and concentration camps like Auschwitz. Eighty percent of the Theresienstadt population was eventually killed.

And Margaret Gruenbaum, her son and daughter narrowly escaped that fate. (Her husband had already been executed by the Gestapo, according to the museum.)

In the camp, she had been forced to work in the toy shop, making teddy bears for German youngsters.

When she and her children were put on a train for Auschwitz, she argued that, if she was sent away, the teddy bears would not get finished. All three were taken off the train. Afterward, there were no further transports from there to Auschwitz.

The museum said her scrapbook, compiled after the war, contains a striking collection of things: yellow Stars of David she wore that say “Jude”; her transit papers for Auschwitz; and samples of camp money that bore an image of Moses on the bills.

“It’s heavy content,” Olhoeft said of much of the grim material she cares for. “I found that if I get sucked in to reading (a) translation . . . it can be hard to come back out of that.”