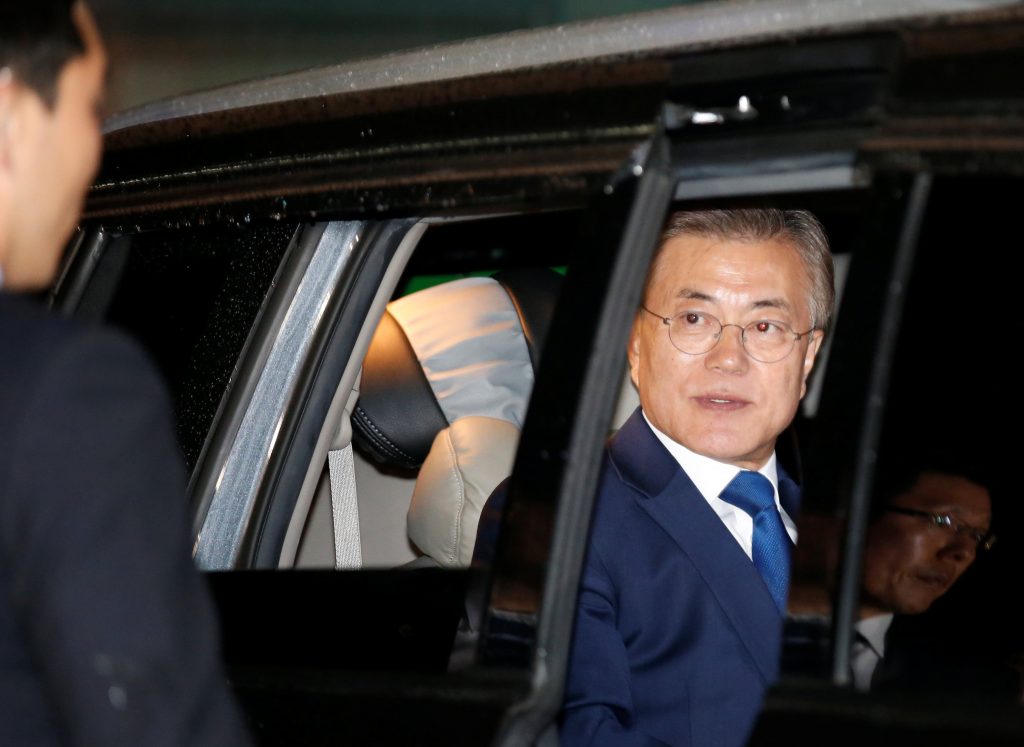 A decisive win by Moon, with more than 40 percent of votes in a field of 13 candidates, would end months of political turmoil stemming from a parliamentary vote in December to impeach former President Park Geun-hye over an extensive corruption scandal.

The Constitutional Court upheld her impeachment in March, making her the first democratically elected leader to be removed from office and triggering a snap election to choose her successor.

Wearing a dark blue suit and blue tie, Moon was seen shaking hands with supporters and party officials and smiling on his way to a meeting of his Democratic Party after the exit poll results were announced.

“We will need to calmly wait and see, as this was just exit polls,” he told party members. “But if things go on this way and we win, today’s victory is thanks to sheer desperation of the people who wanted a regime change.

“We will accomplish the two tasks given to us, reform and national unity that the people of this country desire.”

A Gallup Korea poll last week showed Moon had 38-percent support in a field of 13 candidates.

Moon is expected to be sworn in on Wednesday after the National Election Commission releases the official result. He has said he would skip a lavish inauguration ceremony and start work straight away.

Moon, who narrowly lost to Park in the last presidential election, in 2012, favors dialogue with North Korea to ease rising tension over its accelerating nuclear and missile program. He also wants to reform powerful family-run conglomerates, such as Samsung and Hyundai, and boost fiscal spending to create jobs.

Moon has criticized the two former conservative governments for failing to stop North Korea’s weapons development. He advocates a two-track policy of dialogue while maintaining pressure and sanctions to encourage change.

Moon faces working with a fractured parliament where his Democratic Party holds 40 percent of the single-chamber, 299-seat assembly, which will likely mean difficulties and deals to pass bills.

“He has to pursue cooperation with other liberal and centrist parties, since the Democratic Party does not have the majority,” said Kim Man-heum, head of the Korea Academy of Politics and Leadership.

“Moon has been criticized for running his own ‘clique,’ so in order to get over that negative image, he’ll seek cooperation to avoid rifts and conflicts,” Kim said.

His victory was bolstered by strong support from younger people, the majority of whom voted for him, according to the exit polls. Many of his supporters participated in big, peaceful weekend rallies over the last few months of 2016 and early this year, demanding Park step down.

The election was closely watched by allies and neighbors at a time of high tension over North Korea’s accelerating development of weapons since it conducted its fourth nuclear test in January last year. It conducted a fifth test in September and is believed ready for another.

Moon said in a live stream on Tuesday that South Korea should take on a more active diplomatic role to curb North Korea’s nuclear threat and not watch idly as the United States and China talk to each other.