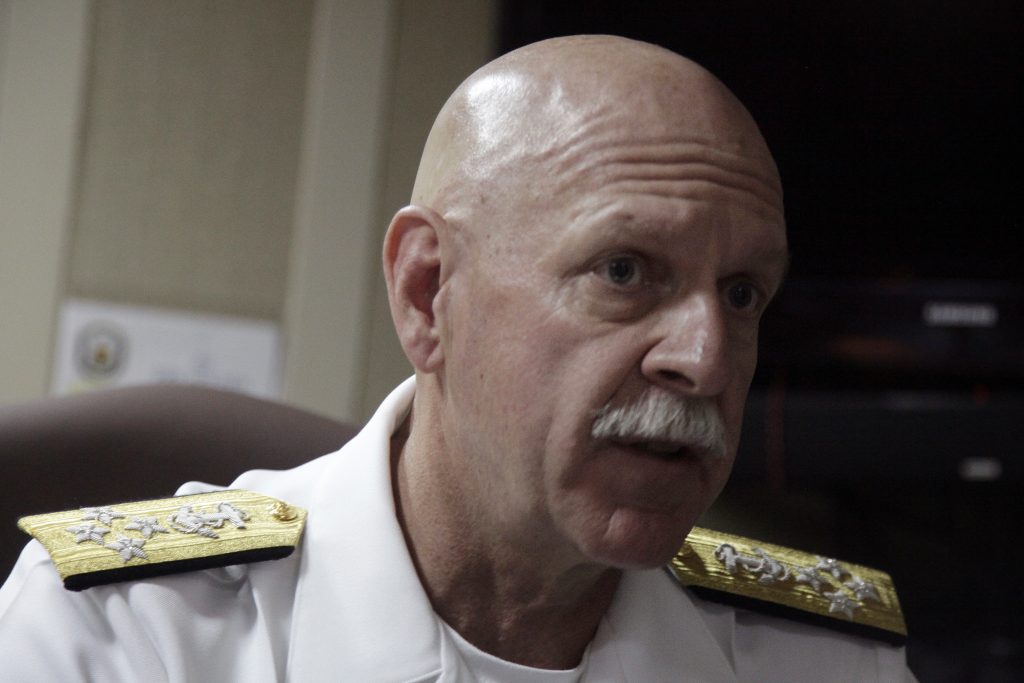 The U.S. Navy will still challenge claims by nations like China to exclusive access in the South China Sea, Pacific Fleet Commander Scott Swift said, insisting a hiatus in “freedom of navigation” patrols doesn’t mean the disputed waterway is a lower priority for the Trump presidency.

“We just went through a change in administration,” Admiral Swift said on Monday at a briefing in Singapore. “I am not surprised that process has continued in a dialogue as the new administration gets its feet on the ground and determines where would be appropriate to take advantage of these opportunities and where we may want to wait.”

“We just present the opportunities when we have a ship in the area and there is an area of interest,” he said, adding the Navy continues to propose such operations. There’s been “no change in policy” toward the region under Donald Trump, he said.

The U.S. hasn’t conducted any so-called FONOPs in the South China Sea since Trump took office, a Pentagon official said previously. Such patrols — where ships or planes go near features claimed by China and others to test their assertions to exclusive access — have typically produced protests from Beijing. The U.S. is not a claimant in the South China Sea, where China has built military airstrips and boosted its naval presence.

Trump called out China during his election campaign for its reclamation of rocks and reefs in the waterway, one of the world’s busiest shipping lanes that carries more than $5 trillion in annual trade. But he’s since made clear he’s counting on cooperation with Beijing to rein in North Korea, and has frequently praised President Xi Jinping.

Leaders of the 10-nation Association of Southeast Asian Nations have also signaled a warmer approach to China. They put out a statement after a late-April summit in Manila noting “the improving cooperation between ASEAN and China” in the South China Sea. They welcomed “progress to complete a framework of the Code of Conduct in the South China Sea” by the middle of this year.

Swift said within the military the process for proposing freedom of navigation operations remained the same. He said there would be advantages in doing them, noting a sense of uncertainty in Asia since the election about the U.S.’s future role.

Still, he said concerns about the U.S. commitment to the region were not new.

Swift added he was unconcerned by China’s recent launch of its second aircraft carrier, its first built domestically.

The carrier program lies at the heart of China’s effort to build a “blue water” navy capable of projecting power beyond its coast and protecting increasingly far-flung interests. Xi has made overhauling and modernizing the People’s Liberation Army a centerpiece of his agenda since taking power in 2012.

“If you have a global economy I think you need a global navy to look after that economy,” Swift said.

“China is emerging on the global stage, and in my view that stage isn’t getting any bigger so we need to make space for China on the global stage; it’s in everyone’s best interest,” he said. “If they think they need carriers to support their maritime strategy then I am not concerned about that.”