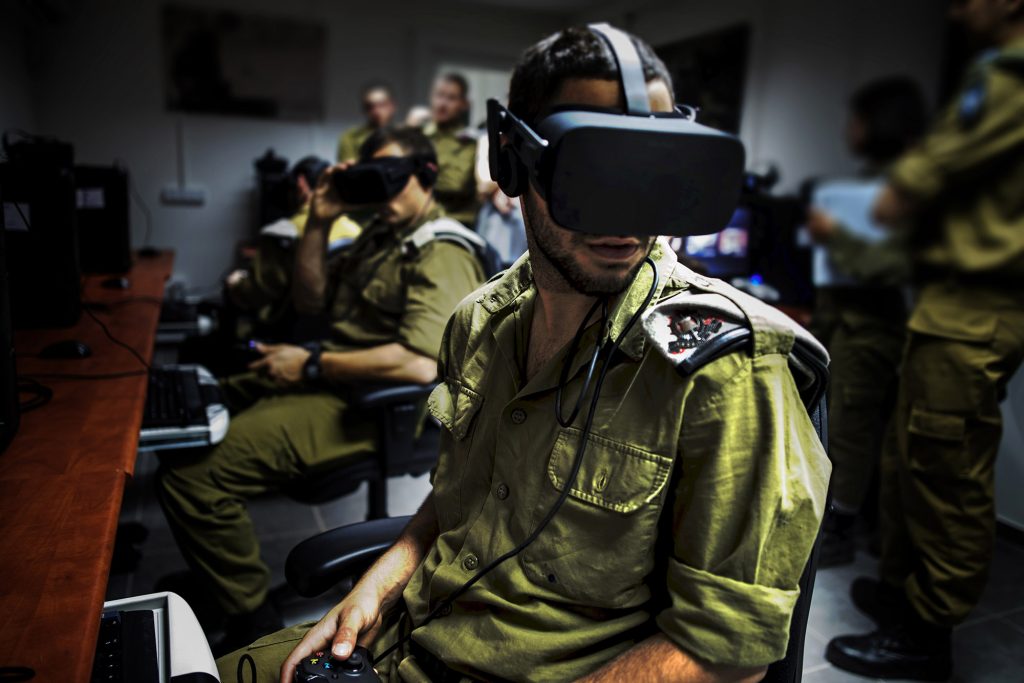 In a refurbished building on a military base in central Israel, soldiers are training in underground combat using headsets made by Oculus, the virtual-reality headset maker owned by Facebook, and Vive, owned by HTC Corp.

While it’s not unusual for a military to use virtual reality — Britain’s Ministry of Defense has been using it in training simulations for more than a decade — the Israel soldiers are using VR to prepare for Hamas attacks through tunnels that crisscross Israel’s border with Gaza, learning how to navigate the claustrophobic terrain both alone and as a team.

Virtual reality allows commanders to put soldiers through exercises that are impossible to carry out in the physical world, said their training officer, Lt. Col. O., whose full name can’t be published due to military regulations. Oculus goggles, chosen for high resolution, create realistic tunnel systems and obstacles for soldiers sitting at a computer, and Vive headsets transport a standing soldier underground, with control sticks to dismantle booby traps. Facebook and HTC didn’t respond to requests to comment.

Deployed in April to train a special force in the combat engineering unit, the VR exercises are cost-effective and cut training time in half, Lt. Col. O. said. The army has spent hundreds of thousands of dollars on the system, which comprises about 10 workstations, and one Vive physical tunnel experience. After the virtual training, the soldiers progress to a tunnel built above ground, whose form can be changed with modular add-ons like giant Legos.

The goal is that with Oculus and Vive, more Israeli soldiers will know how to fight in the tunnels Palestinian terrorist groups dig under the Gaza Strip and across its border into Israel. The tunnels, along with rocket fire on Israeli towns, prompted an Israeli military operation against Gaza in 2014 that left more than 2,000 Palestinians and 70 Israelis dead.

Several soldiers were killed during the fighting by Palestinian gunmen who emerged from tunnels, and one soldier was abducted through a tunnel. A state comptroller report on the war, issued in February, found the government and army had been unprepared to deal with the tunnel threat.

The tunnels may not be a “strategic game changer in the battle of wills between Israel and Hamas,” said Assaf Orion, senior research fellow at the Institute for National Security Studies in Tel Aviv and former head of the Israeli military’s general staff strategic planning division. But they’re “a great attention grabber” and can have a psychological impact.

Israel destroyed more than 32 tunnels in the 2014 war, and two more since then, the army spokesman’s office said. The quickest way to demolish the tunnels is to have soldiers enter and place explosives inside, but many of the underground pathways are booby-trapped for just such a situation, O. said.

Israel is not the only country seeking to defend itself against a tunnel threat. Lt. Col. O. said South Korea, the U.S., Mexico and Iraq also deal with tunnel threats, and he expects interest in the Israeli VR platform to grow.

O. hopes to expand the number of platforms so a squad of about 20 soldiers can train together. Israel also is using augmented reality software to train soldiers to dismantle different types of weapons, and is planning further use of similar technologies. A development unit is working with Microsoft Corp.’s Hololens glasses to create software to turn the headsets into training devices for field personnel and to improve battlefield strategy.