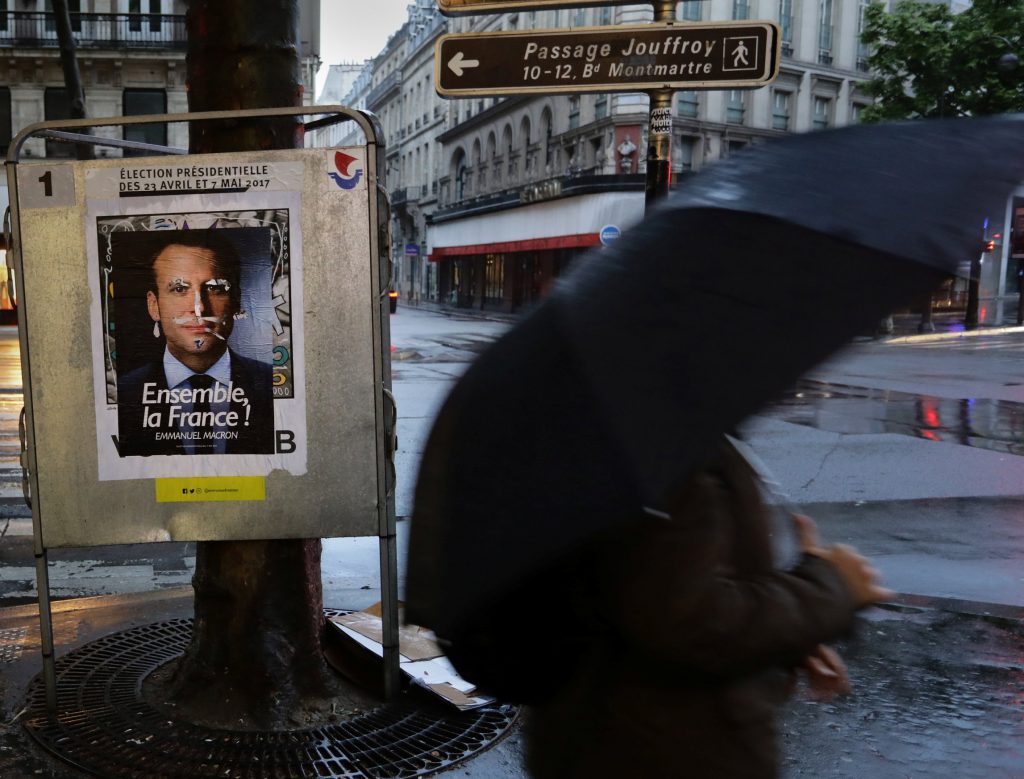 The rapid spread on social media of emails and other campaign documents that Macron’s campaign said on Friday had been stolen recalled the effort by right-wing activists and Russian state media to promote hacked documents embarrassing to Democratic presidential candidate Hillary Clinton last year.

It also renewed questions about whether social media companies have done enough to limit fake accounts or spammed content on their platforms and how media organizations should report on hacked information.

Analysis conducted by The Atlantic Council’s Digital Forensic Research Lab published on Saturday found that the hashtag #MacronLeaks reached 47,000 tweets in three and a half hours after it was first used by Jack Posobiec, a writer in Washington for the far-right news organization The Rebel. Posobiec’s online biography said he coordinated grassroots organizing for a group that supported President Donald Trump’s campaign.

Posobiec’s initial tweet on the Macron documents was retweeted 15 times within one minute and 87 times in five minutes, Atlantic Council senior fellow Ben Nimmo wrote in a post.

Posobiec is prolific on Twitter, where he has a large following of more than 100,000 accounts. Contacted by Reuters, Posobiec said he did not operate bots and that he used his account to share a post he saw on 4chan.

Bots helped move the hashtag from the United States to France, according to Nimmo.

French electoral law forbids candidates from commenting during Saturday and until polling stations close on Sunday.

WikiLeaks, the anti-secrecy group that published hacked emails belonging to Democrats during the 2016 presidential election, provided the largest boost of attention on Twitter to the Macron emails, Nimmo said.

The group did not publish the information itself but tweeted about the leak at least 15 times.

“As the dominant publication in the field we were hours ahead of all other major outlets,” WikiLeaks said in a private Twitter message to a Reuters reporter. “That’s what our readers expect.”

Some researchers also observed the use of identical phrasing in online posts about the leaks, which they alleged was aimed at driving Alphabet Inc’s Google search result rankings. Google did not immediately respond to a request for comment.

About nine gigabytes of data purporting to be documents from the Macron campaign were posted on a site that allows anonymous document sharing.

Other recent high-profile political leaks, including those during the U.S. presidential election, have often been dumped by WikiLeaks, which has a sizable online following and international recognition.

“There is a noticeable lack of a persona taking credit for this,” said John Hultquist, a cyber researcher at FireEye, adding that such an absence made attribution more difficult.

The U.S. cyber intelligence firm Flashpoint told Reuters late Friday that an initial review of the Macron leaks indicated that APT 28, a group tied to the GRU, the Russian military intelligence unit, may be behind the leak, though evidence was not yet conclusive. Among other indicators, the firm said metadata contained in one of the leaked files showed it had been modified by someone who works in the technology industry in Moscow.

But other cyber researchers said that analysis was premature, and Western security officials contacted by Reuters were cautious about assigning any attribution. The Kremlin has repeatedly denied accusations it has attempted to use cyber attacks to meddle in either the French or U.S. elections.

The Macron leaks prompted swift alarm in the United States, where many believed Russian President Vladimir Putin was again trying to put his thumb on the scales of a Western election.

U.S. intelligence agencies concluded that Putin ordered the hacking of Democratic emails during the U.S. election to benefit Republican Trump, who has been at times dismissive of those findings and resurfaced his claim last week that China could have been responsible.

Senator Mark Warner, the top Democrat on the Senate Intelligence Committee, said in a statement to Reuters that the Macron leak demonstrates the urgency of his panel’s investigation into Russia’s alleged interference in last year’s U.S. election.

Noting the Macron dump may contain fake documents mixed in with authentic material, as some analysts have suggested, Representative Adam Schiff, the top Democrat on the House Intelligence Committee, said in a statement that the leak may represent “yet another dangerous escalation of cyber interference in a Western nation’s democracy.”