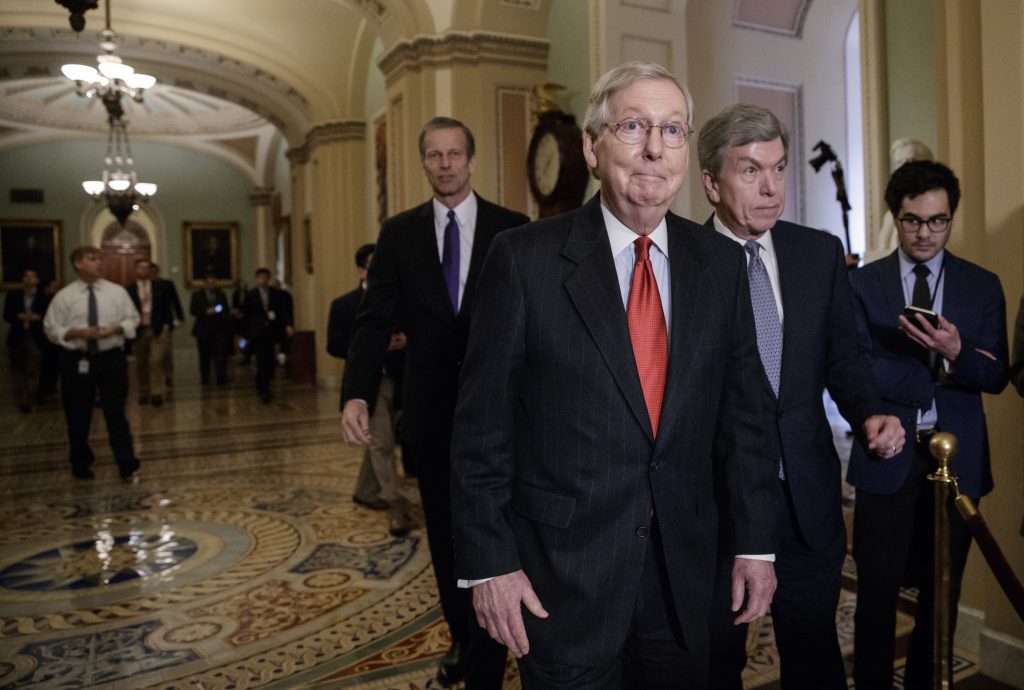 Several Republican leaders on Sunday formed a political barricade around the health-care bill that narrowly passed the House last week, defending how the legislation would change insurance coverage for people with pre-existing illness or injury.

But while House Speaker Paul D. Ryan, R-Wis., and Trump administration officials rallied around the House legislation after intense criticism from Democrats, who say the bill would strip protections, moderate Senate Republicans were outright dismissive.

“The House bill is not going to come before us,” Sen. Susan Collins, R-Maine, said on ABC,” adding that the Senate would be “starting from scratch.”

The Republican split-screen on health care revealed the frothing, nerve-inducing debate within the party about how to gut aspects of the Affordable Care Act, which became law in 2010 and whose demise has been a promise by the Republican Party to its conservative base.

A growing number of Senate Republicans are recasting President Donald Trump’s Rose Garden celebration after the House vote as a mere starting point because of anxiety over how the House bill would affect Medicaid recipients in their states, insurance costs for people with conditions such as diabetes or cancer, or the breadth of health benefits in states that would be able to jettison current federal insurance requirements.

Yet Mr. Trump and many of his allies continue to doggedly talk up the House bill, resisting the suggestion that the Senate could discard major items in the legislation, which was crafted with inputs from the hard-line House Freedom Caucus.

And many of them remain defiant amid the barrage of attacks from Democrats, who have insisted that the House bill would make acquiring coverage more difficult for people with serious ailments and disrupt insurance markets – and see in the Republicans’ efforts a chance to reclaim the House majority next year.

The seemingly divergent political positioning on display Sunday underscored the fragility of the Republican Party on an issue that has galvanized them for years. Senate Republicans, generally more centrist in their politics, do not feel compelled to herald the House bill. But House Republicans and White House advisers, who are more skittish about fraying the relationships they have cultivated with House conservatives and activists, do not want to shelve or play down the bill that just passed.

Ryan, for instance, offered a spirited defense of the House bill on ABC as he was peppered with questions about the possibility of sharp premium increases for people with pre-existing conditions and the worry that many people on Medicaid will lose their coverage.

Ryan described the House bill as a “rescue operation” meant to address what he characterized as a badly failing Affordable Care Act.

“We will want to make sure people who have bad health-care status, who have a pre-existing condition, get affordable coverage,” Ryan said. “That’s not happening in Obamacare. You got to remember, if you can’t even get a health insurance plan, what good is it? You don’t have health insurance.”

White House chief of staff Reince Priebus acknowledged GOP House members could face some criticism but predicted they would ultimately be “rewarded” by voters for having addressed what he described as the failures of the current health-care law.

“Sometimes in life you have to do what’s right, not what’s politically expedient,” Priebus said during an appearance on Fox.

How the GOP ultimately moves forward this spring and the internecine wrangling over the scope of the final congressional product will have sweeping consequences for the health-care system. With Republicans controlling both chambers in Congress and the White House, the lingering question for them is not whether to repeal some provisions of the law but whether the Senate or House will hold sway on the details.

“We’re going to go through that process,” White House budget director Mick Mulvaney said on CBS’ “Face the Nation”. “Is it ugly? Maybe. Is it slow? Yes, but it’s the right way to do it, and it’s how we’re going to handle this bill.”

Mr. Trump – who on Sunday largely remained out of public view at his secluded private golf club in Bedminster, New Jersey, and planned to return in the evening to Washington – has urged the Senate to act but said little about what amendments, if any, he would support.

“Republican Senators will not let the American people down! ObamaCare premiums and deductibles are way up – it was a lie and it is dead!” Mr. Trump tweeted Sunday.

For now, Senate Republicans are signaling that they are in control, after weeks of tumult within the House. Collins, along with Sen. Rob Portman, R-Ohio, and Sen. Lindsey Graham, R-S.C., have in recent days spoken out forcefully against parts of the House bill, with Graham saying it “needs to be viewed with suspicion” and Portman asserting that “it does not meet the test of stability” for people who rely on the “safety net” of Medicaid.

Sen. Roy Blunt, R-Mo., said on NBC’s “Meet the Press” on Sunday that he and his colleagues would “come up with what the Senate thinks the Senate can do.”

Blunt, who is close to Senate Majority Leader Mitch McConnell, R-Ky., said the Senate GOP will wait to review a score of the legislation’s cost from the Congressional Budget Office before moving ahead with any vote. The House GOP did not have the final version of their bill scored last week, but it was reviewed in prior forms, with the CBO concluding that 24 million more Americans would lack health insurance by 2026 if that bill became law.

Priebus argued that any concerns about people with pre-existing conditions are overblown, stressing that nothing would change for people with coverage through their employer, Medicare and Medicaid. Even people in states where governors seek waivers will be affected only if they don’t have continuous coverage, he said, and there is money in the bill to help them.

“We’ve put billions … into high-risk pools to buy down any premiums.” Priebus said, referencing a change to the House bill late last week that would provide $8 billion over five years to help people with preexisting conditions – including cancer, high blood pressure, asthma and even expecting mothers sometimes – afford coverage. “If you have a pre-existing condition, this president is not going to let you down.”

Priebus said he talked Saturday with six Republicans who are part of the working group on the Senate version of the bill, called them “mature”, and said he is confident in the changes they may make.

The talks at the moment mostly involve only Republicans. Sen. Joe Manchin, D-W.Va., who has been friendly with Mr. Trump, said Sunday that he was distressed that no Democrats have been asked to work on the bill in the Senate. A working group of 13 GOP senators from different parts of the ideological spectrum is meeting twice a week to talk about how to move ahead.

“I’m the most centrist Democrat willing to work and fix things,” Manchin said on “Face the Nation.” He said people in his rural, working-class state would be “completely slammed” by the House bill.

Leading health policy experts have questioned GOP claims and how they would work in practice. Among the most significant: How many states would back away from the federal protections for people with medical conditions? How many would cut back on a set of “essential benefits” that current law requires to be included in all health plans sold to individuals or small businesses? And how many people would lose coverage because of other changes in the House plan?

There is no one meaning of “pre-existing conditions,” but the term generally refers to acute or chronic ailments that a person has or had in the past and that might return. Such ailments often require more medical care than healthy people tend to use. Before the 2010 Affordable Care Act, the law that Mr. Trump and congressional Republicans are eager to dismantle, Americans with such medical challenges often could not get or afford insurance.

An estimated 50 million to 129 million Americans have some pre-existing health problem, according to an analysis by federal health officials during the Obama administration.

As House Republicans fanned out across the country for a one-week recess, Mulvaney, a former House member from South Carolina, said lawmakers should be “ecstatic” about the chance to talk to their constituents about the legislation.

“Absolutely, without reservation,” Mulvaney said. “That’s what I would do.”

But the public response has been decidedly mixed, as have lawmakers’ handling of the issue.

When Rep. Raúl R. Labrador, R-Idaho, a member of the House Freedom Caucus, held a town-hall meeting on Friday, he was pelted with boos and jeers.

“Nobody dies because they don’t have access to health care,” Labrador told the crowd, prompting an uproar that has since been replayed several times on cable media.