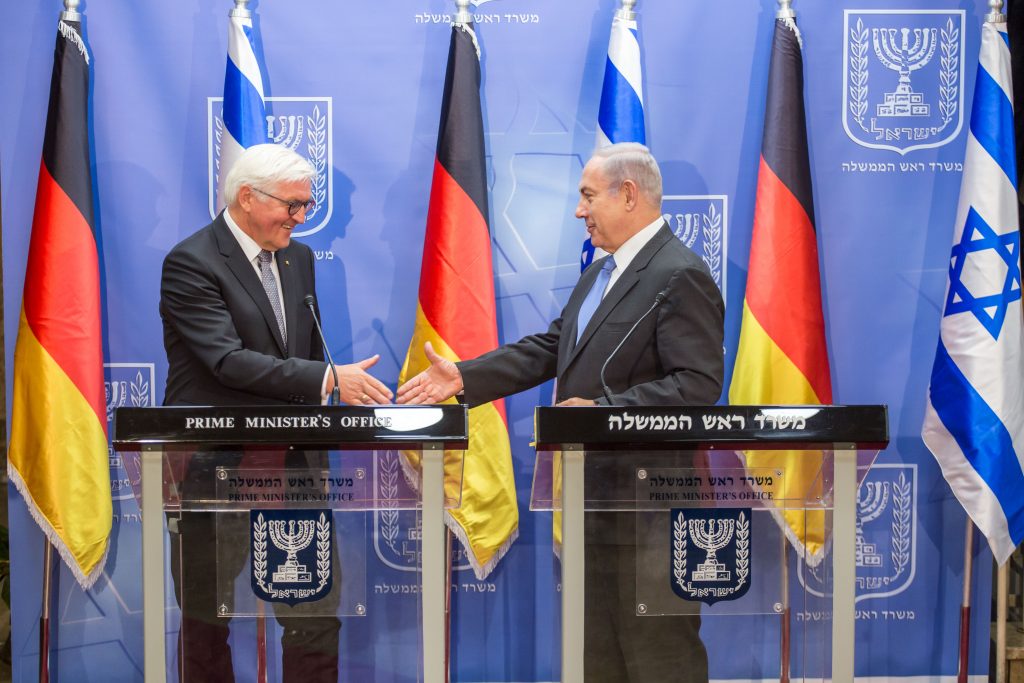 The relationship between Germany and Israel remains strong despite a recent diplomatic row, German President Frank-Walter Steinmeier assured Israeli hosts during his visit on Sunday.

“The foundations (of the Israeli-German) relationship are so broad that I think they can endure some turbulence like that taking place in the last 14 days,” Mr. Steinmeier said at the President’s Residence in Yerushalayim.

He referred to Prime Minister Binyamin Netanyahu’s decision to cancel an April 25 meeting with Foreign Minister Sigmar Gabriel after the latter refused to call off a meeting with Breaking the Silence at the government’s request. Mr. Steinmeier will reportedly honor that request.

“The unique relationship of our two states is too important to be measured solely by the question of who a legitimate interlocutor should be,” Mr. Steinmeier said.

“I believe that we can and should be able to lead an open and honest dialogue with one another, and to my mind, need no new rules,” he said.

During a visit to Yad Vashem, the German leader reiterated his country’s guilt for the Holocaust:

“We Germans brought upon ourselves incomprehensible blame. At this place, the memory becomes pain, mourning and shame. By taking responsibility for what happened, we stand by Israel and [together] work for a common future,” Ynet quoted him as saying.

President Reuven Rivlin thanked Mr. Steinmeier for the German vote against a UNESCO resolution last week denying Israeli claims to Yerushalayim and labeling the Jewish state as “the occupying power” in the city. Germany was reportedly leading European support for the resolution, but after intensive Israeli diplomatic activity, its vote changed. While the resolution was endorsed, Germany, the United States, Italy, Great Britain, Holland, Lithuania, Greece, Paraguay, Ukraine and Togo opposed the resolution.