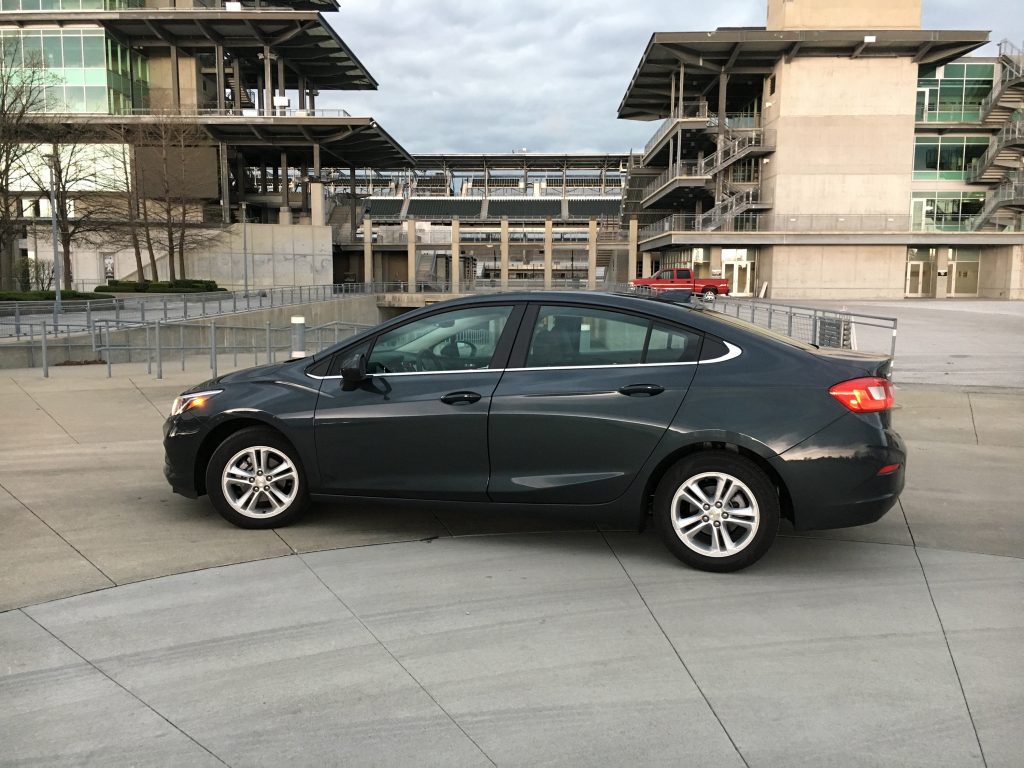 On either side of the highway, crops were beginning to sprout. The flat, boundless plains of the Midwest can be fertile ground for crops as well as beauty — in certain seasons, at certain times. This was not one of those times. This trip to Indianapolis was plain boring, except for the fuel-economy gauge. With the cruise control of the 2017 Chevy Cruze diesel set to the safer side of 80 mph, the mpg topped 46. If we were hitting that optimal fuel economy spot of just under 50 mph, we might’ve averaged 50 mpg.

But this was Indiana and we had to get out.

Aside from the fuel economy, the 1.6-liter turbo diesel engine was unnoticeable on the highway. The thrum of road noise and spasms of wind, as well as the recurring scenery, kept the cockpit of the Cruze compact sedan as insulated as slumber. At idle, the engine noise was as noticeable as a quiet companion, but it’s a great trade-off for 240 pound-feet of torque. The only time we considered the diesel is when we passed the gas station — two cents less than gas; no need to fill up — we were only 200 miles into our drive, and had about two-thirds of a tank left.

The diesel was winning on all the fuel metrics. There may be no better car for the highway commuter concerned about fuel economy than the 2017 Chevy Cruze diesel. While the Cruze with the six-speed manual gets 52 mpg on the highway, better than any nonhybrid or plug-in, our model with the smart, smooth-shifting nine-speed transmission gets an EPA-estimated 47 mpg highway. Gas prices will rise, and the Cruze diesel will look even better.

We can’t talk diesel without bringing up the dirty elephant in the room: Volkswagen. Once VW was uncovered for cheating emissions tests and consumers by spewing illegal amounts of pollutants, many pundits forecast the end of the diesel’s brief surge in the U.S. Instead, General Motors is doubling down on diesels in the Cruze, 2018 Cruze hatch, Chevy Equinox and GMC Terrain compact crossovers — not just to woo disgruntled VW TDI owners, but to appeal to a small but loyal class of car buyer that prefers the greater torque and economy of diesel engines.

Diesel engines are more efficient than gas engines in part because diesel fuel has more energy and the engines have greater compression ratios. All this means is more bang for the buck of every pump of the piston. On the other hand, diesel fuel can cost more in the winter, though it is typically more constant than gas, and cars with diesel engines can cost anywhere from $1,000 to $6,000 more than a gas counterpart.

The Cruze diesel is about $2,500 more than a similarly equipped gas model. That extra coin gets you the second-best trim level Chevy offers, along with heated front seats with leather trim, remote start and other goodies. The Cruze diesel also has the nine-speed automatic transmission which isn’t available with the gas engine.

The Cruze is generally better-equipped than the competition at comparable trim levels, but the tester’s near-$29,000 tag erodes some of the fuel-efficient charm. You can’t get the diesel for under $25,000, no matter how you package it.

The Cruze sedan doesn’t stand out much on the outside. It looks like a normal car with basic proportions favored by folks who doodle in the margins of grade-school notebooks. That’s not a bad thing, especially with the modern trend of expanding grilles into gaping catfish faces, or adding aesthetic flourishes with no function (Civic Hatch).

The normalcy carries over inside, where it becomes a subtle-but-defining positive. The use of space isn’t as expansive as the class-defining Honda Civic, but the controls are conveniently placed and logically arranged. The 8-inch touch screen with MyLink is one of the better systems on the market, largely because the redundant steering controls mean you don’t really need to use the touch screen. The icons are large, there are volume and tuning knobs, and climate control buttons. Chevy is doing away with native navigation in all but the Premier trim, instead opting for Apple CarPlay or Android Auto, which is far better than any automaker system. The only downside is the phone has to remain plugged in. The $1,125 leather package, which includes a heated and leather-wrapped steering wheel, makes it feel much more refined than the usual compact as budget car standard.

The other competitive advantage that has fueled Chevy’s resurrection as a maker of good cars is the advanced safety technology bundled under the “driver confidence” package. Rear park assist, cross traffic alert and blind zone alert are effective without being intrusive. My favorite feature in this package is the multicolor driver display in the instrument cluster. It’s a clear drop-down menu between the gauges that lets you access just about everything offered in the touch screen without needing to take your hands off the wheel or eyes off the road for more than half a second. And it’s actually useful, instead of the technology-for-technology’s sake that is popping up in more and more cars.

The cost of ownership calculations of buying a diesel depends on many things, but if you’re planning on owning such a car for more than five years and plan on logging tons of highway miles, you can put those calculations to rest and consider the scenery.