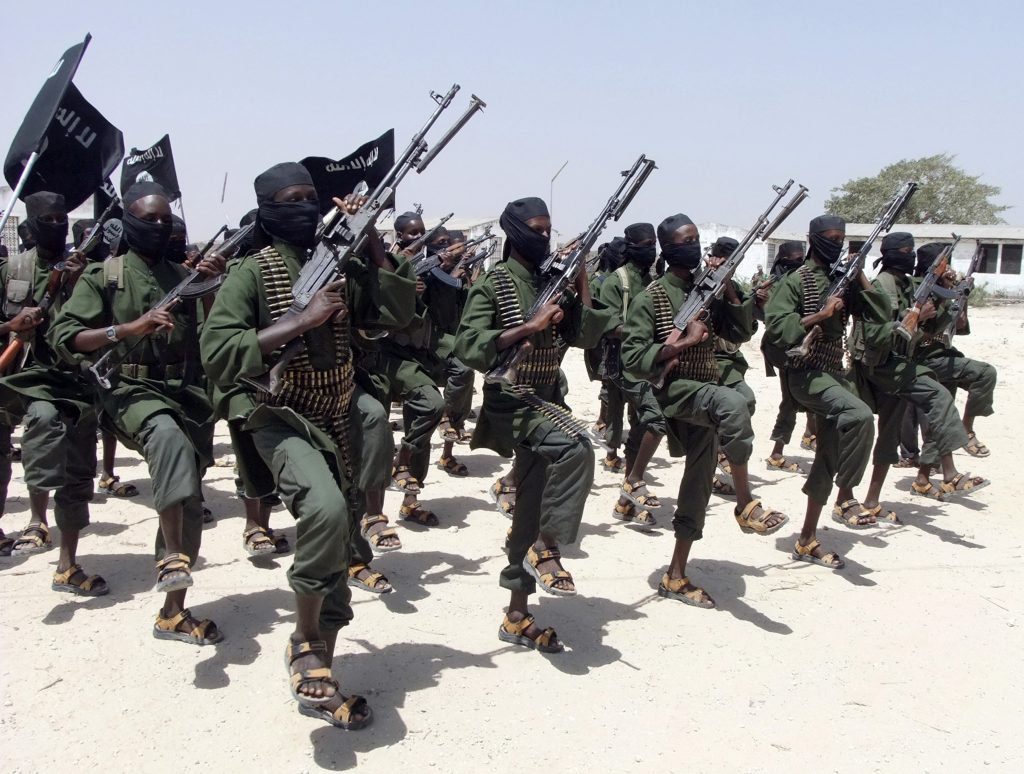 A U.S. service member has been killed in Somalia — the first U.S. combat death there in more than two decades — during an operation against the terror group al-Shabab, as the United States steps up its fight against the al-Qaida-linked organization in a country that remains largely in a state of chaos.

“We do not believe there has been a case where a U.S. service member has been killed in combat action in Somalia since the incident there in 1993,” U.S. Africa Command spokesman Patrick Barnes said Friday. The United States pulled out of Somalia after that incident in which two helicopters were shot down in the capital, Mogadishu, and bodies of Americans were dragged through the streets.

In a statement, the U.S. Africa Command said the service member was killed Thursday during the operation near Barii, about 40 miles west of Mogadishu. The Pentagon said two other service members were wounded. The U.S. said its forces had been conducting an advise-and-assist mission with Somalia’s military.

A Somali intelligence official said U.S. forces killed at least six people during the raid on a building housing al-Shabab’s Andalus radio station at a farm near Dare Salaam village. The official, who spoke on condition of anonymity because they were not authorized to speak to the media, said the dead included al-Shabab journalists.

Al-Shabab, via its Shahada News Agency, said that “an air landing operation by U.S. special forces was thwarted in Lower Shabelle province and a number of their soldiers were killed and wounded,” the SITE Intelligence Group reported.

Both the United States and Somalia in recent weeks have declared new efforts against al-Shabab. President Donald Trump has approved expanded military operations against the group, including more aggressive airstrikes and considering parts of southern Somalia areas of active hostilities.

Somalia’s new Somali-American president, Mohamed Abdullahi Mohamed, last month declared a new offensive against al-Shabab, which is based in Somalia but has claimed responsibility for major attacks elsewhere in East Africa.

Also last month, the U.S. military announced that it was sending dozens of regular troops to Somalia, in the largest such deployment to the country in roughly two decades. The U.S. Africa Command said the deployment was for logistics training of Somalia’s army.

The U.S. in recent years has sent a small number of special operations forces and counterterror advisers to Somalia and has carried out a number of airstrikes, including drone strikes, against al-Shabab.

The terror group, which was chased out of Mogadishu years ago but continues to carry out deadly attacks there, has vowed to step up the violence in response to the moves by Trump and Mohamed.

Aid groups have raised concerns about the new military efforts, saying civilians could be at risk as hundreds of thousands are displaced by a drought that threatens roughly half the country’s population of 12 million.

Pressure is growing on Somalia’s military to assume full responsibility for the country’s security as the 22,000-strong African Union multinational force, AMISOM, that has been supporting the fragile central government plans to leave by the end of 2020.

The U.S. military has acknowledged the problem. The AU force will begin withdrawing in 2018, and head of the U.S. Africa Command, Commander General Thomas Waldhauser, has said that if it leaves before Somalia’s security forces are capable, “large portions of Somalia are at risk of returning to al-Shabab control or potentially allowing ISIS to gain a stronger foothold.”

Fighters linked to the Islamic State terror group, also known as ISIS, are a relatively new and growing challenge in the north of the country, which has seen a quarter-century of chaos since dictator Siad Barre fell in 1991.

“The wider context, and hence why the U.S. may be being more aggressive vs. al-Shabab now, is to try and engineer a timely and successful exit strategy for AMISOM, which means degrading al-Shabab and bolstering the Somali security forces,” Paul Williams, an associate professor at George Washington University and author on peacekeeping operations in Africa, said in an email.