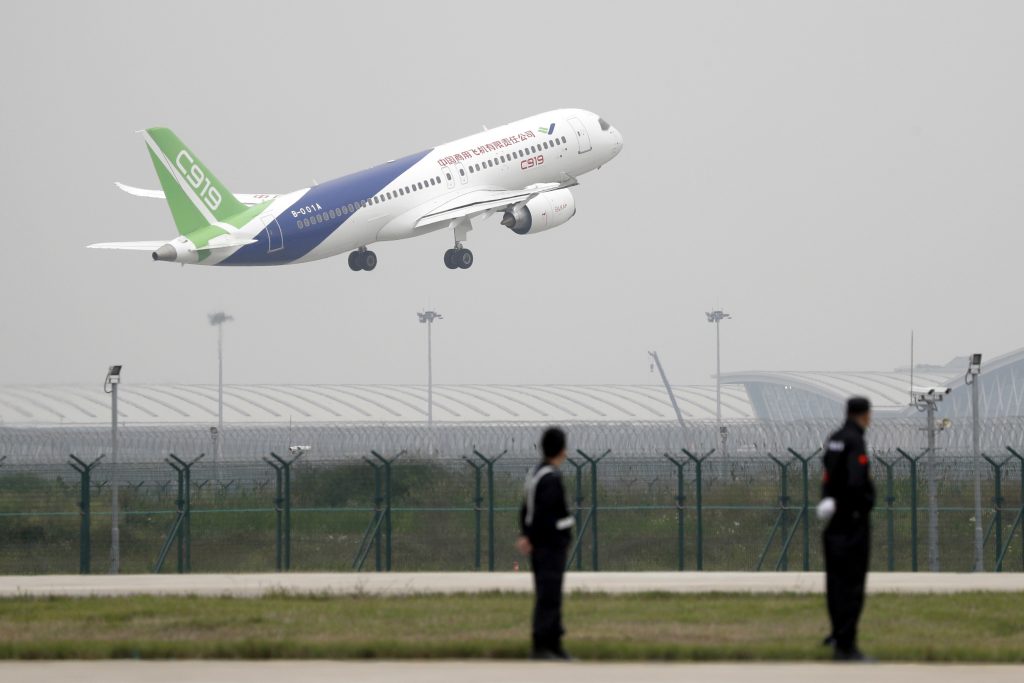 The first large Chinese-made passenger jetliner took off Friday on its maiden test flight, a symbolic milestone in China’s long-term goal to break into the Western-dominated aircraft market.

China is touting the C919 as a rival to single-aisle jets the Airbus A320 and Boeing 737. The plane was originally due to be test flown in 2014 before being delivered to buyers in 2016, but has been beset by delays blamed on manufacturing problems.

If the maiden flight is successful, the aircraft’s maker, state-owned Commercial Aircraft Corp. of China Ltd., or Comac, will then seek certification from China’s civil aviation authority and foreign regulators before making any deliveries.

Bao Pengli, deputy director of Comac’s project management department, said Thursday the manufacturer planned to make two planes a year from now to 2019 to obtain proof of safe flight, before any mass production would be started.

The jet’s development is a key step on the path laid out by Chinese leaders to transform the country from the world’s low-cost factory into a creator of profitable technology.

Comac says more than 200 Chinese companies and 36 universities have been involved in the research and development of the aircraft.

But it also relies on foreign-made technology for critical systems, including its engines, which are made by CFM International, a joint venture between General Electric’s aviation subsidiary and France’s Safran Aircraft Engines. The first deliveries of Chinese-developed engines are expected in 2020, according to the company tasked with making them, AVIC Commercial Aircraft Engine Co. Ltd.

China’s first domestically made jet, the twin-engine regional ARJ-21, flew its passengers in June 2016, eight years after its first test flight. That smaller jet is a rival to aircraft made by Bombardier Inc. of Canada and Brazil’s Embraer SA.