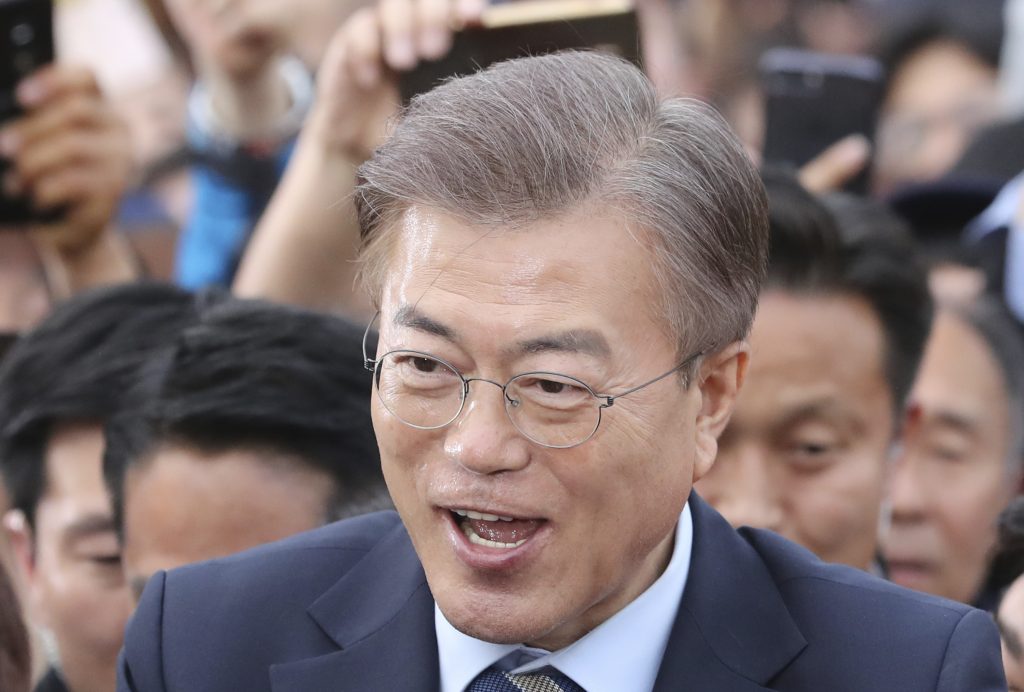 As a member of South Korea’s special forces in the 1970s, Moon Jae-in stood out.

Most soldiers at the time exhibited the patriotic fervor demanded by then-dictator Park Chung-hee, whose government routinely locked up sympathizers of North Korea. Moon’s unit awoke most mornings to a song declaring: “Knock down Kim Il Sung, smash up North Korea.”

Moon, a former student protester, looked undersized compared to his muscular peers and enjoyed picking wildflowers, according to Roh Chang-nam, a 14-year special forces veteran who served with Moon. Some fellow troops saw his placement in one of the military’s toughest units — part of his compulsory service — as punishment for participating in pro-democracy activities.

One day, Moon stunned Roh by saying that while North Korea’s leadership should be punished, its citizens should not. He questioned what South Korea would get out of unification if it killed ordinary people.

“I warned him that such a remark would put us in prison, even though I agreed in my mind,” Roh said. “His attitude on the North hasn’t changed at all in 40 years.”

Moon, 64, is now poised to become the most powerful person in South Korea, after Park’s daughter Park Geun-hye was ousted as president in March. The son of North Korean refugees is the frontrunner in the May 9 election, an outcome that would end nine years of conservative rule and probably bring a softer touch to relations with Kim Jong Un’s regime.

That approach could put Moon at odds with U.S. President Donald Trump, who says that military force remains an option to halt Kim’s pursuit of nuclear weapons and the long-range ballistic missiles that could bring them to North America. Moon this week blasted a U.S. push to install a missile shield in South Korea before the election, saying the decision should be reviewed by the next president.

In other respects, however, they may see eye to eye. Moon has long said he’s prepared to meet Kim under the right conditions, a position Mr. Trump espoused this week in an interview with Bloomberg News. He also sees the policy of the past nine years as a failure, wants China to take more action and favors a two-track approach of sanctions and dialogue. Moon declined to be interviewed for this story.

Moon’s openness to sanctions is a stricter stance than the Sunshine Policy, the policy of late President Kim Dae-jung. Roh Moo-hyun, Moon’s former boss and mentor, continued that approach before leaving office in 2008. While Moon will be easier on North Korea than his two conservative predecessors, he must “face reality,” said Kim Hyun-wook, a professor at the Korea National Diplomatic Academy.

“Making a complete U-turn to the Sunshine Policy, an extreme option of conversation-only without any pressure, won’t be easy,” he said. “The threat from North Korea is much more grave than under the Roh government.”

Kim has accelerated his push for the ability to strike the U.S. with a nuclear weapon, and has hundreds of artillery pieces within striking range of Seoul, which is about 30 miles (48 kilometers) from the demilitarized zone. While North Korea’s state media routinely threatens to annihilate the U.S. and its allies in North Asia, Kim has also signaled a willingness to talk: Last year he sought negotiations with South Korea’s military, an overture that was rebuffed.

The increased tensions around North Korea have made foreign policy the focus of a campaign that months ago appeared to be centered on the close ties between big business and politicians that led to Park’s impeachment. While Moon has laid out plans to spend more money to create public-sector jobs and reform family-run conglomerates known as chaebol, his views on North Korea have taken center stage.

That hasn’t always been good for Moon, a human-rights lawyer before becoming a top aide to the late president Roh. He lost the 2012 election to Park after promising a thaw in relations with North Korea, opening him up to attacks from conservatives who have ruled for all but a decade since South Korea embraced democracy in the 1980s.

Yet with Park’s party reeling from the corruption scandal that led to her downfall, Moon’s only real threat is centrist candidate Ahn Cheol-soo, who has sought conservative votes by backing the deployment of the Terminal High-Altitude Area Defense system, or Thaad. The debate has started to shift in Moon’s favor amid public discontent over the rush to get Thaad ready and after Trump called for Seoul to pay for it.

For Moon, the North Korean issue is deeply personal. His parents fled the country during the Korean War in a U.S. warship. In 2004, he visited North Korea with his mother, who met her younger sister for the first time in decades as part of a family reunion program.

During his military service, Moon took part in one of the most notorious incidents at the heavily fortified DMZ. In 1976, North Korean commandos used axes to kill two U.S. army soldiers who were cutting down a tree that blocked the view of United Nations observers. Moon was part of the unit that went in to knock down the tree in a show of force.

In a televised campaign speech, Moon cited his military experience in decrying attempts by his critics to brand him as weak on North Korea. He advocated pushing for a moratorium on North Korea’s weapons programs as part of a phased plan to disarm it, while offering incentives for dialogue.

“North Korea’s grave nuclear threats should be dealt with the first thing, but eventually we should proceed with the Sunshine Policy for unification,” Moon said.

Moon had called for the reopening of a joint industrial complex just north of the border in order to build confidence with the regime, though he’s warned more recently the resumption of activity at the factory park wouldn’t happen if Pyongyang conducts another nuclear test.

If tensions ease, he eventually would like to see greater economic integration, including the connection of a gas pipeline between Siberia and South Korea that traverses North Korea.

Moon’s optimism of a more peaceful Korean peninsula doesn’t mean he’ll be lenient on Kim, according to Roh, his former superior in the special forces. Their unit was trained to land in Pyongyang in parachutes, destroy facilities like oil tanks and “fight until death.”

“It’s very much an absurd reputation,” Roh said of the criticism of Moon. “Surrounded by bulky Rambos he may have looked slight, but mentally he was as strong as anyone.”